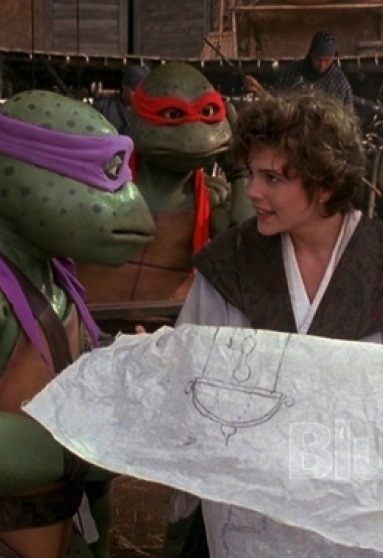 
Delicious departure from the formula


Inspired by an absurdist 1984 comic book that heckled superheroes, the mutant terrapins eventually mutated into a 1990s film franchise. The joke got old and finally fizzled out with the release of 1993's Teenage Mutant Ninja Turtles III: The Turtles Are Back . . . in Time.

Wednesday, March 17, 1993
TEENAGE MUTANT NINJA TURTLES III: THE TURTLES ARE BACK . . . IN TIME. Based on characters created by Kevin Eastman and Peter Laird. Music by John Du Prez. Written and directed by Stuart Gillard. Running time: 96 min. Mature entertainment with the B.C. Classifier's warning: some violence. COWABUNGLE, DUDES!
April (Paige Turco) is in trouble. It may be just your ordinary time-travel equal-mass displacement thing, but the effect is radical, sewer-side, for New York's favourite television newsgirl.
One minute, she's handing out presents to her present-day buddies, the Teenage Mutant Ninja Turtles. A moment later, she's in the middle of some major palace intrigue in medieval Japan.
Forget the Foot. In writer-director Stuart Gillard's Teenage Mutant Ninja Turtles III: The Turtles Are Back . . . in Time.
Not your ordinary urban-action cartoon, Gillard's tale is a terrapin take on Shogun. A vigourous cross-cultural adventure fantasy, it combines swashbuckling samurai dramatics with the youth rebellion comedy that remains at the heart of the TMNT phenomenon.
Something out of the ordinary was necessary to keep the phenom from fizzling. As a certain Kermit T. Frog is fond of saying, "it's not easy being green."
Comic book critters Leonardo, Donatello, Michelangelo and Raphael learned that lesson after their second feature film, 1991's Teenage Mutant Ninja Turtles II: The Secret of the Ooze.
"Geeky," said the fans. Totally formula and totally boring, Ooze was little more than a reprise of their big screen debut film of a year earlier (Teenage Mutant Ninja Turtles).
Gillard, who shot television's Bordertown series here in B.C., takes the comics-inspired film franchise in a new direction. I like to think that the Coronation, Alberta-born director was inspired by the cheerful turtle-motif place mats that are used in our local Kamei Sushi restaurants.
TMNT are orphans, after all. They should be interested in exploring their  kamei — the word means "turtle" — roots.
What if they were to suddenly appear in 17th century Japan? Why, they'd probably be mistaken for vicious demons called kappa — green, nasty, trick-playing water demons.
And what if a quartet of mass-displaced samurai guardsmen showed up in TMNT's subterranean home? In no time at all, Casey Jones (Elias Koteas) would turn them into demon ice-hockey fans.
Gillard's awesome ideas translate nicely to the screen. Instead of boring old Shredder, the villain of the piece is English arms dealer Dirk Walker (Stuart Wilson), an Elizabethan privateer supplying weapons to the ruthless Lord Norinaga (Sab Shimono).
Parents who take their kids to Gillard's new turtles epic will appreciate the traditional matinee-movie plot as well as his film's bodacious recreation of Japan's Shingu province on Oregon coast locations.
The picture could even turn the kids on to some Pacific Rim pop cultch. Either way, its a happy return for the Heroes in a Half Shell.

Afterword: My delight in the third live-action TMNT feature was not shared by my more important critical colleagues. Despite box-office success, it did less well than its two predecessors, and there would not be another until Paramount Pictures attempted to reboot the franchise with a 3D version in 2014. Critics were no kinder to the Michael Bay production (directed by South African-born Jonathan Liebesman), but enough people turned up in the theatres to make it a financial success. A sequel, Teenage Mutant Ninja Turtles: Half Shell, went into production in late April, 2015, and is scheduled for release on June 3. 2016.
TMNT III was writer-director Stuart Gillard's second theatrical feature. His name was already familiar to me from his work as an actor in such interesting early Canadian features as The Rowdyman (1972), Why Rock the Boat? (1974) and Threshold (1981). He moved into the director's chair in 1987, making his debut with a Disneyland TV episode called The Return of the Shaggy Dog. Since then, he's made his living behind the camera. He currently works regularly on the Toronto-based fantasy series Beauty and the Beast, directing the performances of the Vancouver-born Kristin Kreuk. Among the science-fiction titles on his resume is the made-for-TV movie adaptation of Phil Farmer's science-fiction classic Riverworld, shot in Vancouver in 2010.