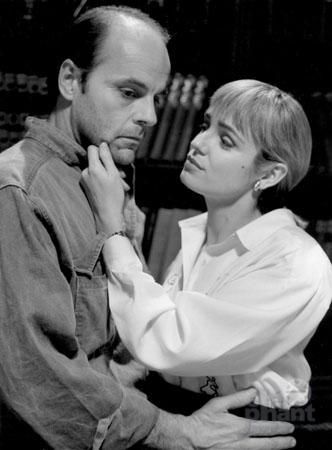 
Inspired by the politically-charged work of European director Costa-Gavras, Jean-Claude Lord specializes in fact-based drama. Born on this day (June 6) in 1943, Lord explored Canada's contribution to CIA research into torture techniques in his 1989 thriller Mindfield.

Tuesday, December 19, 1989.
MINDFIELD. Written by William Deverell, Tom Berry and George Mihalka. Based upon the 1989 novel by William Deverell. Music by Milan Kymlicka. Directed by Jean-Claude Lord. Running time: 92 minutes. Rated 14 Years with the B.C. Classifier's warning "some violence, occasional coarse language, nudity, suggestive scenes."
SARAH PARADIS (LISA LANGLOIS) is an angry young woman. A Montreal barrister specializing in labour law, she's currently involved in an injury compensation case with sinister political dimensions.
Her clients are the alleged victims of mind-control experiments conducted on behalf of the U.S. government in Canada. "The CIA funded Coldhaven," she insists.
"They paid this man," she says, pointing across the courtroom to a kindly-looking doctor named Satorius (Christopher Plummer), "to play with human brains."
Director Jean-Claude Lord used to be an angry young man. The Montreal-born filmmaker made his first major impact with the French-language feature Bingo (1974), an original, timely political thriller that offered a deliciously paranoid interpretation of 1970's Quebec crisis.
Energetic and effective, it featured young lovers, terrorism, labour strife and governments willing to use any means to maintain their hold on power. Lord looked like a man going places.
Sadly, his efforts in the years since have been nothing to write home about. A journeyman director earning his living in Canadian television, Lord's occasional feature work includes a routine slasher-shocker (Visiting Hours; 1980), a kid's picture for Rock Demers (The Tadpole and the Whale; 1986) and this year's [1989] Eddie and the Cruisers II: Eddie Lives.
Mindfield, his return to the political paranoia thriller, was actually filmed before the rock romance Eddie II. Based on a formula screenplay by B.C. lawyer-turned-novelist William Deverell, it contains the same basic elements as Bingo.
For lovers, Lord offers us the self-righteous Sarah and self-pitying Montreal cop Kellen O'Reilly (Michael Ironside, the homicidal maniac in Visiting Hours).
They meet because of Sarah's work with the police union, a group discussing strike action against the city. Though a union official, O'Reilly is against the strike.
He's also in the final stages of a divorce, a combination of stress factors prompting painful flashbacks to his own Coldhaven experience.
Surprise. The cop was once one of Satorius's experimental subjects, among those the scientist "strapped to tables, hit up with LSD and burned their brains."
All of this, of course, has to do with covert government operations.
The pieces fall together when some hit men turn up in town, and begin wasting minor Mafiosi. According to the local godfather, the killers are "friends of the Family from down south" but they are "not private sector."
Perhaps Lord is no longer angry. Along with his cast, he goes through the motions, producing a picture without authority or edge.
Their collective lack of conviction only serves to underscore the general silliness of Deverell's over-the-top tale.

Afterword: William Deverell's novel and Jean-Claude Lord's feature film were Inspired by Project MKUltra, a secret CIA program from the early 1950s bought to light in the mid-1970s. Detailed in a 2012 feature article in the McGill Daily, the project involved Canadian scientists experimenting on human test subjects, using such drugs as LSD. Their research was the basis for the 1963 Kubark Counterintelligence Interrogation Handbook, the "torture manual" that the U.S. spy agency used in its training programs throughout the developing world. In the mid-1980s, many of the program's victims went to court seeking compensation for their physical and mental suffering. The Dr. Satorius character in Mindfield is loosely based on MKUltra's lead scientist Dr. Ewan Cameron who, in real life, died in 1967.
Celebrating his 73rd birthday today, Jean-Claude Lord won considerable praise for his breakthrough feature, 1974's Bingo. Critics (myself included) hailed him as the Canadian Costa-Gavras, a director whose work was informed by social concerns and a talent for contextualizing historical moments. Bingo offered a fictionalized version of Canada's 1970 October Crisis, and explored the chillingly contemporary theme of youth radicalization. In a 2012 interview, he cited the 1961 musical West Side Story — "everything in the film, even the songs, were meant to drive the plot" — and Costra-Gavras's 1969 feature Z as the two movies that "influenced my desire to make films . . . and have guided my career." Lord's determination to both entertain and educate received only sporadic support in the nascent Canadian film industry.
The 13th of his 15 fictional features, Mindfield was not the box office success its producers had hoped for. The bulk of his work since has been in the French language for Quebec television. In 1986, Lord created and directed all 13 episodes of the landmark CBC/Radio Canada TV series Lance et compte / He Shoots, He Scores. It was the first Canadian TV drama to be simultaneously broadcast in both French and English. A téléroman, it took as its subject the one thing both communities were passionate about: professional hockey. Lord produced additional seasons of Lance et compte in 2002, 2004, 2006 and 2008.