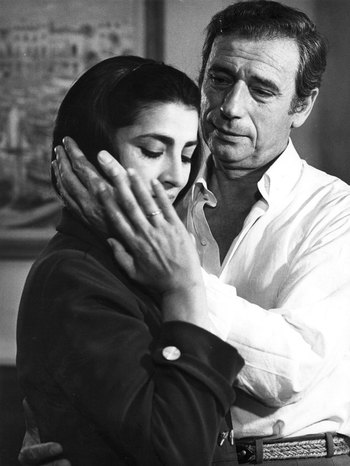 Helene (Irene Papas) shares a moment with her husband, the doomed Greek deputy based on Grigoris Lambrakis (Yves Montand) in director Costa-Gavras's Z.


A European who came of age during a time of national crisis, Irene Papas might have been a Hollywood star. Born on this day (September 3) in 1926, the Mediterranean beauty made her feature debut in Fallen Angels (1948), the product of a Greek cinema emerging from years of occupation and civil war. She starred in nine European movies before being called to the U.S. Promoted as a "starlet," she was "introduced" to American audiences as James Cagney's co-star in Robert Wise's 1956 western Tribute to a Bad Man. The introduction did not result in a relationship, and she would not make another feature in the U.S. for more than a decade. Returning to Europe, she became part of the "Golden Age" of Greek cinema, making her name in such classic roles as Antigone (1961), Electra (1962), Helen of Troy (in The Trojan Women; 1971) and Clytemnestra (in Iphigenia; 1977). American audiences mostly remember the six "international" films in which she co-starred with Anthony Quinn — Attila (1954), The Guns of Navarone (1961), Zorba the Greek (1964), A Dream of Kings (1969), The Messenger (1977), and The Lion of the Desert (1981). Since the early 1990s, Papas has been picking up lifetime achievement prizes, including the 2002 Women of Europe Award, presented annually since 1987 by the E.U.'s European Commission. Among those achievements was a role in Costa-Gavras's politically charged 1969 feature, Z.

Saturday, April 12, 1970.
Z. Written by Jorge Semprun, based on the 1966 novel by Vasilis Vasilikos. Music by Mikis Theodorakis. Directed by Constantin Costa-Gavras. Running time: 127 minutes. In French with English subtitles. FOR SOME MEN THE MOVIES have meant more than simple distraction and an evening's entertainment.
"There exists today no means of influencing the masses more potent than the cinema," wrote Pope Pius XI.
In  rare agreement with the Roman Pontiff was Vladimir Ulyanov, more commonly known as Lenin. "The cinema must and shall become the foremost cultural weapon of the proletariat."
In visual terms, their words are realized in films like Z, a raging, ringing, relentless denunciation of the military junta currently ruling Greece. It also happens to be a splendid bit of cinema.
Like Robert Rossen nearly 20 years before him, director Costa-Gavas has zeroed in on a political figure who met death by an assassin's hand. Like All The King's Men (1949), Z is a contender for the best picture Oscar.
The comparison breaks down on specifics. Willie Stark's death was Rossen's climax. Dr. Z's is Costa-Gavras's beginning.
Superficially the story of Louisiana's "Kingfish" Governor Huey Long, Columbia pictures covered Rossen's product with the usual "any similarities are purely coincidental" disclaimer.  Z, on the other hand, is a fighting film. Its title is a Greek symbol that means "He is alive".
Its story is the unauthorized and officially suppressed account of the 1963 Lambrakis affair, and it opens with a screen-filling declaration that proclaims all of its similarities to be "intentional".
Dr. Z (Yves Montand; based on the real life Grigoris Lambrakis), a former Olympic champion and university professor, is an opposition party deputy scheduled to address a peace rally in an important provincial city.
The rally's organizers receive an anonymous warming that Z is a marked man. Despite demands for adequate police protection, Z is struck down, and his death officially called a traffic accident.
An uncompromisingly honest Magistrate (Jean-Louis Trintignant; based on Christos Sartzetakis) is put in charge of the investigation set up to affirm the official account. He finds a useful ally in a young Journalist (Jacques Perrin) whose nose for news has turned up the scent of conspiracy.
Together they assemble the case against Z's real killers, despite a lecture on political prudence from the city's Public Prosecutor (Francois Perier), and a stormy lesson in practical patriotism from the Minister of Justice. Fearlessly, the Magistrate indicts everyone against whom he has evidence.
Justice, through the efforts of its steely-eyed servant, triumphs, the highly-placed evil-doers are exposed and the drama is complete. Costa-Gavras, however, is attempting more than just drama.
His story has an historical epilogue. As in Stanley Kramer's Judgment at Nuremberg (1961), neither indictments nor sentences mark The End.
In the historically parallel tale of modern Greece, the courageous ended up either disgraced, imprisoned or dead. The guilty, in the wake of a military coup, gained even greater power.
In Z art follows life, but manages to remain art. Costa-Gavras, his cast and his crew were all passionately committed to their film as a cause but remained at all times true to their calling as professional artists.
Costa-Gavras, himself a Greek in exile, makes thrillers. His tight, efficient style owes much to the low-budget (though high-gloss) American features produced in the 1940s. (Odeon Theatres, incidentally, is toying with the idea of reviving Costa-Gavras's two previous films, 1965's The Sleeping-Car Murders and 1967's Shock Troops, as a local distribution double feature.)
Z, the man, is beaten upon the head. Z, the film, responds by driving straight for the gut. It has right-thinking heroes and red-necked villains. The audience is given every opportunity to cheer one and boo the other.
The cast, working for token wages, have turned in uniformly fine performances. Yves Montand, the stuffy-nosed detective from Costa-Gavras's 1965 film, plays the martyred politician. Though he dies early in the film, he returns continually in flashbacks, world-weary nobility firmly etched on his face. lrene Papas, as his stricken widow, Helene, adds an unmistakably Greek feeling to the tragedy.
Z  dies bravely, but the film's real heroes are the men who choose to live courageously — the Magistrate and the Journalist. They are an unlikely team.
One, the Magistrate, is the son of a police colonel, and he conducts his investigation strictly by the book. He is dedicated to the law and his own ethics.
The other, the Journalist,  cuts corners. Young and ambitious, his zeal provides most of the ammunition for the official investigator. He believes in the freedom of the press to get its story any way it can.
Fortunately for filmgoers, they all succeed with their dramatic goals, and a film that began as propaganda stands up magnificently as cinema.
Long after the Greeks have healed their political wounds, audiences will remember Z as a great film.

The above is a restored version of a Vancouver Express review by Michael Walsh originally published in 1969. For additional information on this archived material, please visit my FAQ.

Afterword: Irene Papas is a performer who can truly be said to have "done it my way." The scant evidence suggests that it was she who rejected Hollywood, rather than the other way around. In 1969, she was before the cameras in London, playing Katherine of Aragon to Genevieve Bujold's Anne Boleyn (in Anne of the Thousand Days). I like to imagine the then 42-year-old Papas sharing her Hollywood memories with the 26-year-old Bujold, an accomplished actress about to experience her own crisis moment with a Big Studio contract. In 1971, they would have occasion to chat again, on the Spanish set of Greek director Michael Cacoyannis's The Trojan Women (in which the Canadian was playing Cassandra to Papas's Helen of Troy). I like to think that Bujold's ultimate decision to shrug her lovely shoulders at the American idea of stardom and return to a distinguished career in Quebec cinema was in some way influenced by the example set by Papas.
For more on the Greek-born activist/entertainer Costa-Gavras, read my review of his 1973 feature Etat de Siege (State of Siege).