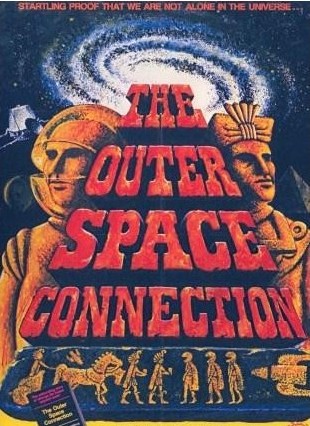 “Startling proof that we are not alone in the universe” is the promise made on the theatrical release poster for 1975’s The Outer Space Connection.


On the line with ancient astronauts


For those who share Fox Mulder's “want to believe,” today (May 3) is National Paranormal Day. Observed by the faithful since 2013, the informal holiday recognizes men such as Charles Fort, whose research into the unknown may have inspired 1975’s The Outer Space Connection

THE OUTER SPACE CONNECTION. Based on the 1975 book by Alan and Sally Landsburg. Music by Roger Wagner. Written and directed by Fred Warshofsky. Running time: 94 minutes. General entertainment. IT COULD HAVE BEEN caused by jet lag, the result of the three-hour time difference between here and Niagara-on-the-Lake. More likely it was just plain, old-fashioned boredom.
Whatever the reason, the fact is that I fell asleep during The Outer Space Connection. A variant on the by-now familiar Chariots of the Gods? theme, the new film is by turns annoying, insulting and enervating.
It should have been fascinating. The idea that Earth may have been visited by extraterrestrial beings during man’s prehistory is both interesting and exciting. Properly presented, the concept is a challenge to further thought and intellectual exploration.
The key is presentation. Responsible documentarists have enough respect for audiences to maintain some distance from their subjects and to present findings with apparent objectivity and some skepticism.
Such qualities are not to be found in the works of Swiss author Erich von Däniken. His books — 1968’s Chariots of the Gods? and 1970’s Return to the Stars — are sly, shrill and self-serving. They read like the work of a first-class crank.
Somehow, though, they started something. A film version, made in Germany in 1969, was presented as a 90-minute CBC-TV special in 1972. It was repeated,  and then released in an “uncut” version to theatres.
An American TV network re-edited the footage into a 1973 show called In Search of Ancient Astronauts. Narrated by the silken-voiced Rod Serling, it included comments from the likes of rocket scientist Werner von Braun and astronomer Carl Sagan.
Now comes The Outer Space Connection, a film based on a paperback best-seller and again narrated by Serling. (Neither the film, nor screenwriter Alan Landsburg's original book, should be confused with Sagan’s scientifically solid The Cosmic Connection: An Extraterrestrial Perspective. That would be like confusing a frankfurter with a steak filet.)
This latest pseudoscience spinoff claims to present “startling proof that we are not alone in the universe.” It must have done so after I fell asleep, because all I remember seeing were the same old statues and carvings, along with the same old shots of Peru’s Plain of Nazca.
The most annoying thing about such films is that they don’t explain, they preach. Tenuous theories and spurious speculations are presented as historical facts. The camera focuses on the ruins of Tiahuanaco, and thereafter the place is referred to as ancient astronauts’ “Earth Base One.”
Tied to this somehow are ideas of pyramid energy — a concept that’s probably familiar to people who frequent occult bookshops, but was never really explained in the film — and immortality.
(It was sadly ironic to hear Serling, a gifted and imaginative writer who died earlier this year [1975] at the age of 50, droning on about immortality.)
Then there were some experiments with monkeys and, as I drifted off to sleep, I remember recalling that “Taurus is the sexual surprise of the Zodiac.” I hadn’t known that before.
That particular revelation is, I’m told, contained in a recent [1973] paperback astrology manual called Sex and the Stars. Some friends of mine were comparing signs while I was away, and that bit of information was considered particularly interesting.
Astrology is probably nonsense —Carl Sagan has used the more polite term “pseudoscience” —  but no more than the credulous rubbish contained in books such as The Outer Space Connection. And yet some people give both the respect that others accord scripture.
Saturday night, a lady told me that she had difficulty getting to a sewing class located in the same block as the theatre showing the movie. All the parking places were taken and there was a line up and down the block.
Neither the movie nor its popularity make a lot of sense. I did my best to stay with it, but its arguments provided about as much mental stimulation as a pre-frontal lobotomy.
Near the end, I heard Serling’s voice assuring us that the pre-Columbian Mayan calendar predicts that the spacemen will return. They’re due back on December 24, 2011.
December 24?
Ho, ho, ho.
Wake me when it’s over.

Afterword: How do I know that today (May 3) is National Paranormal Day? Well, the Internet tells me so. Specifically, a website called Days of the Year, which says that it “was created in 2013,” but fails to mention where or by whom. Because the page makes quite the fuss over Charles Fort, I sought further information about the legendary anomalous phenomenologist. As it happens, Fort died on May 3, 1932. It’s probably just a coincidence (a word that doesn’t exist in the vocabulary of true believers). Digging further, I discovered that on May 3, 1975, Twilight Zone creator and The Outer Space Connection narrator Rod Serling suffered the first of the three heart attacks that killed him. Using the logic that prevails in the works of Erich von Däniken, we can conclude that something sinister is at work here. But what? The Mayan calendar notwithstanding, those mysterious space guys missed our 2011 Christmas Eve rendez-vous, suggesting that they really aren’t that into us.
Diehard Forteans trace the idea of ancient astronauts to musings of Charles Fort on the subject of UFOs in his 1910 The Book of the Damned. H.P. Lovecraft picked up on the idea in his 1926 short story The Call of Cthulhu, and it literally took off in 1947, following a major outbreak of flying saucer sightings in the U.S. Erich von Däniken, mentioned in the above review, made a career out of putting the pieces together. He published some 20 alternatively factual books between 1968 and 2015. Though von Däniken got little respect from the scientific community, he remains a hero to science-fiction writers and filmmakers, who have borrowed liberally from him. Alan Landsburg joined the throng in 1973, producing an American TV version of the 1970 German Chariots of the Gods feature, retitled In Search of Ancient Astronauts and narrated by Rod Serling. That same year, he produced writer-director Fred Warshofsky’s TV documentary, In Search of Ancient Mysteries, again with Serling narrating. The Outer Space Connection, based on his own book, completed the trilogy. In 1977, Landsburg created a series for TV’s ScI-Fi Channel called In Search of . . ., a program that “investigated” tales of the paranormal. It ran for six seasons (1977-1982) with Leonard Nimoy as its host and narrator.

See also: The reference to Niagara-on-the-Lake in the above review reminded me that I'd paid a working visit to the historic Ontario town to cover the1975 Canadian Film Awards. Because there had been no ceremonies held in 1974, two best picture prizes were handed out. The 1974 award went to director Ted Kotcheff’s The Apprenticeship of Duddy Kravitz, while Michel Brault’s Les Ordres took the 1975 prize.