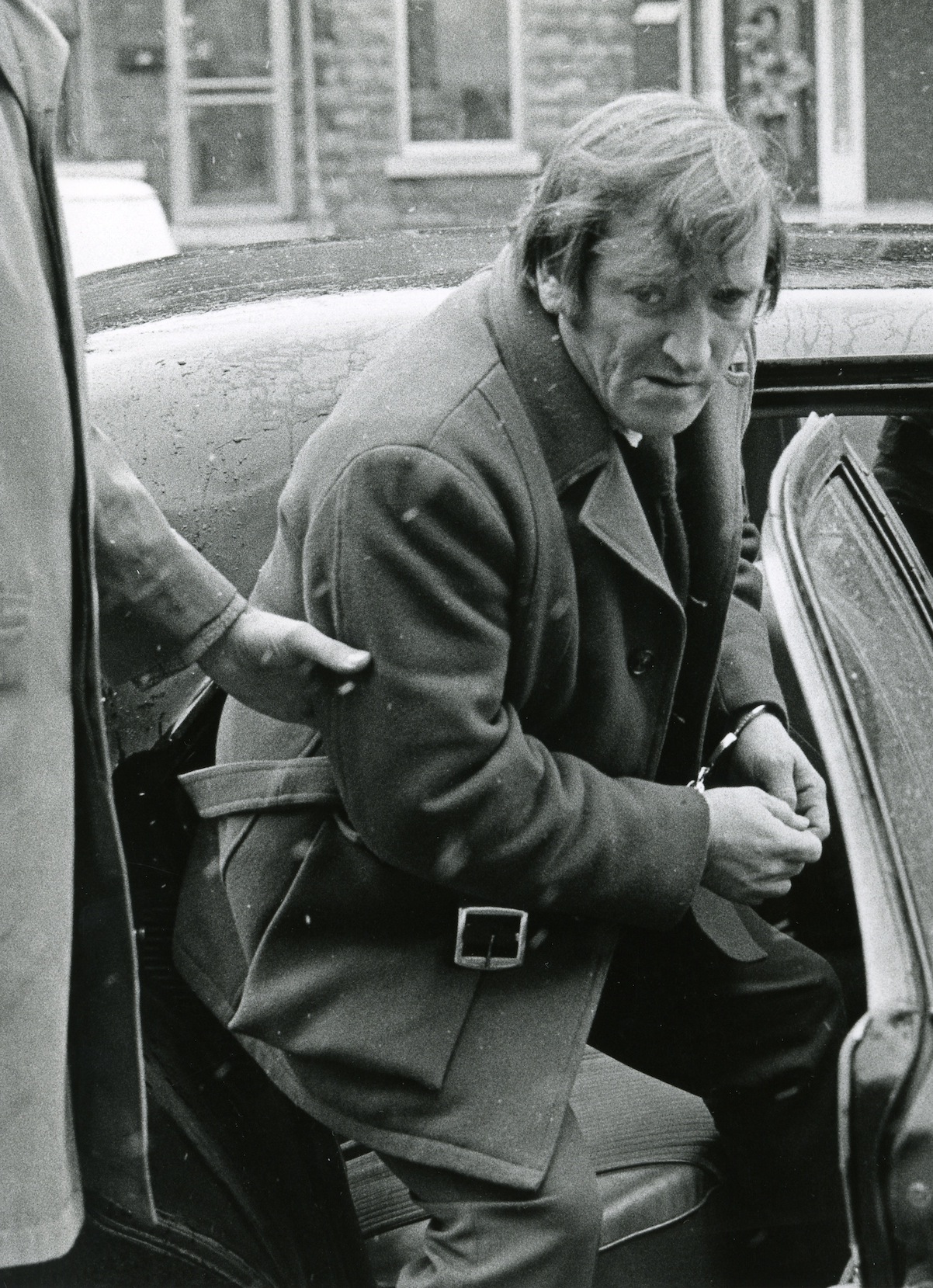 Textile union member Clermont Boudreau (Jean Lapointe) is taken into police custody on the morning of October 16, an innocent swept up as a result of the "special law" examined in writer-director Michel Brault's Les Ordres (1974).

Lessons yet to be learned


On this day (October 16) in 1970, two Canadians met for lunch in downtown Chicago. As they walked along State Street, they were shocked to see a headline in a newspaper box that read "Civil rights suspended in Canada." The October Crisis (which had begun eleven days earlier with the kidnapping of British trade commissioner James Cross in Montréal) became the one time that the draconian War Measures Act was invoked in peacetime. Three days from now (October 19), Canadians go to the polls to vote in a federal election, the 42nd in the nation's 148-year history. With three major and three minor parties competing for parliamentary seats, the result could be a crisis with consequences more dire than that short-lived imposition of martial law in Québec. At least three of the contending parties — the New Democrats, Liberals and Greens — agree that Canada's first-past-the-post electoral system is broken and needs to be fixed. The possibility exists that a party opposed by nearly two-thirds of voters — the Conservatives — will be returned to government. Some political observers see a threat to the very existence of Canada as we know it in the so-called Conservatives' corporatist ideology. Legal scholars have pointed out that its Anti-terrorism Act 2015 (Bill C-51) is significantly more onerous than the War Measures Act. Worth recalling are the effects of that previous "special law," the subject of writer-director Michel Brault's passionate 1974 feature Les Ordres.

Saturday, August 23, 1975.
LES ORDRES. No music credit. Written, photographed and directed by Michel Brault. Running time: 109 minutes. Mature entertainment; in French with English subtitles. AT FOUR O'CLOCK IN THE MORNING on October 16, 1970, Canada ceased to to a free country. In Ottawa, under harsh artificial lights, Regulations to Provide Emergency Powers for the Preservation of Public Order were proclaimed.
At virtually the same moment in Montreal, squads of police were setting out to make use of this new "special law." In less than 12 hours. they had more than 200 people in custody.
It all happened with savage swiftness. Today, we know that invocation of the War Measures Act was a dangerous and irresponsible overreaction, a horror that could in a moment sweep away 1,000 years of democratic evolution, hard-won rights and social institutions.
"What we went through was hard," says Clermont Boudreau (Jean Lapointe), one of the central characters in Les Ordres (Orders), Wednesday's premiere feature at the Dunbar Theatre's Festival of International Films.
"Maybe people will learn from it."
If they don't, it will be no fault of Michel Brault, named 1975's Best Director at the Cannes Film Festival for his powerful, compassionate  recreation of that unconscionable Canadian horror. With cool, documentary authority, writer-director Brault strips away the emotional confusion of a momentary political crisis to bare the vital human issues.
In doing so, he offers his countrymen the first truly important film ever made in this country.
Despite its documentary look, Brault does not want Les Ordres to be thought of as an historical drama. It is, he has said, purposeful fiction. He sets the tone by having each of his major performers introduce him or herself before stepping into the role.
"My name is Jean Lapointe, and I play Clermont Boudreau." His character is a textile worker who is suspended for union activities the afternoon of October 15.
Like the other characters in the film — Boudreau's wife Marie (Hélène Loiselle), unemployed former student Richard Lavoie (Claude Gauthier), social worker Claudette Dusseault (Louise Forestier), and one-time socialist political candidate Dr. Jean-Marie Beauchemin (Guy Provost) — Boudreau is a composite. His character is based on information Brault recorded in interviews with 50 former detainees.
A working man, Boudreau is not particularly political, even at the height of the crisis. The reality of the situation dawns on him slowly. "Think that it's true that the army is in town?" he asks a storekeeper friend.
It's true. But, as with the rest of the characters, it is not a matter of deep personal concern. Each accepts his early morning arrest, not like people in a movie, but like people in real life; the sort of victims Aleksandr Solzhenitsyn describes in his Gulag Archipelago.
Because they know they are innocent, they go quietly.
A mistake has bean made. It will be corrected at police headquarters.
"None of us had been charged," recalls Dr. Beauchemin.  "We thought they'd let us go that afternoon."
But the rules had changed. Under the "special law," neither warrants nor specific charges were necessary for the police to make an arrest. The ordeal was just beginning.
Because of the power of his subject, it is easy to forget the talent behind Les Ordres. Brault is, of course, Canada's master cinematographer, with the visual poetry of both 1971's Mon Oncle Antoine and Kamouraska (1973) to his credit. His cast, despite the personal introductions, are so right for their roles that they seem to live rather than play them.
Together, they recall the agony of the most incredible nightmare in this nation's history. Processed like cattle,  subjected to personal indignities and, in some cases, to calculated psychological torture, they had no recourse to any authority.
Defined as "the enemy," they had been interned.
There was no excuse for any of it. As Ron Haggart and Aubrey Golden make clear in their 1971 book Rumours of War,  it was never necessary to make Canada a police state for the police to do their job. The incarceration of 450 innocent persons — persons who were never charged with anything — did nothing to help resolve the kidnapping that set off the crisis.
Ultimately, the issue is not terrorism nor insurrection. It is freedom, and whether personal liberty and individual integrity are more important than "public order."
Dr. Beauchemin sums it up. "What we lived through was just a symptom. We must not let the disease spread."
Les Ordres is a film that should be seen by every thoughtful Canadian. More than that, though, it should he required viewing for every elected official in this country.
Lest they forget.

Afterword: That story of the two Canadians who met for lunch in Chicago in 1970 is true. They were my wife Susan, a Canadian landed immigrant who became a citizen a few years later. While on a family visit, she met with Patrick O'Gorman, her former boss at a company called TransWorld Films, and a Canadian working in the U.S. For my part, I was in The Province newsroom on October 16. Because I was working as an editor, responsible for handling the copy of some of our more outspoken columnists, I asked senior staff for some guidance as to what Ottawa's "special law" mean for us. "Don't worry about it,"  I was told. The War Measures Act was "only for Québec," so I should carry on as usual. I learned a valuable lesson in realpolitik that morning. Though the Chicago Tribune's "Civil rights suspended in Canada" headline cut to the chase with shocking accuracy, it failed to note that some fairly major exemptions applied for English Canada. Over the years, those exemptions have not gone unnoticed within the Francophone community, or in the province where every licence plate displays the motto Je me souviens (I remember). Among the memories for Québéc voters in the current election is the fact that Bill C-51 was passed into law on May 6, 2015,  with the support of a federal Liberal Party led by Justin Trudeau, the son of Pierre Trudeau, the Liberal prime minister who imposed the War Measures Act on their distinct society 45 years ago today.

See also: During a 1976 visit to Vancouver, Michel Brault shared his thoughts on the War Measures Act, the dangers of political forgetfulness and the making of 1974's Les Ordres.