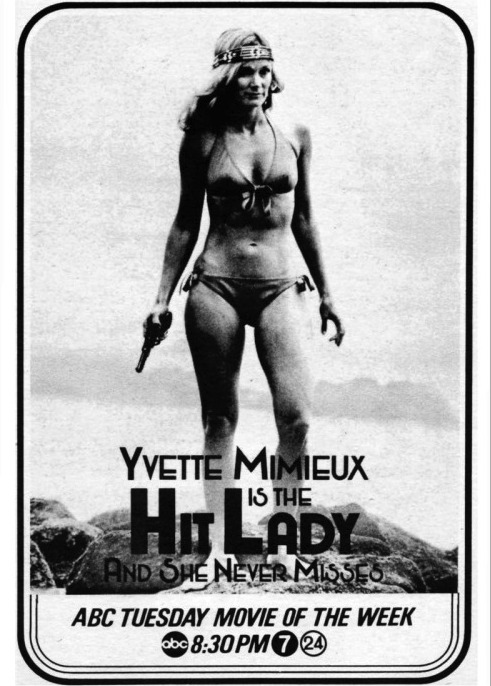 A magazine advertisement for the 1974 telefilm Hit Lady emphasizes the fact that Yvette Mimieux is the star, but fails to mention that she is also the screenwriter.


Contributing to entertainment’s cause


Born on this day (January 8) in 1942, actress Yvette Mimieux visited Vancouver in 1974 to play a starring role in Journey into Fear. During an interview, she lamented the lack of strong roles for women in film and discussed her coming debut as a television screenwriter.

AT  FIRST  GLANCE, THE presence of an electric typewriter in a leading lady’s hotel suite seems incongruous. Actresses as attractive as Yvette Mimieux are not expected to be bright.
Her early movies emphasized her blonde beauty. She was the simple-minded girl cowering in Rod Taylor’s arms (in 1960’s The Time Machine), a fairy-tale princess dancing across a Cinerama screen (in 1962’s The Wonderful World of the Brothers Grimm) or Charlton Heston’s rebellious kid sister (in 1962’s Diamond Head).
Her characters may have been delicate and occasionally crafty, but not bright.
Appearances can be deceiving.
The reality is a refreshing and pleasant surprise. Intelligent, purposeful and self-assured, Mimieux is not only an established actress but a frequently published photo-journalist and a screenwriter as well.
Later this year [1974], she will make her debut as a movie producer.
“I came into films at the end of an era when women had interesting parts,” she tells me. “What was missing was the basic material. No longer were the old Europeans — who came to Hollywood in the 1930s and 1940s and wrote for women — working. The marvellous women who were writing in that period were gone, too.”
The problem was that there were no strong roles being written for women. The answer, says Mimieux, is for “the very aware and bright women” to return to the business of moviemaking.
At the present time, she says, “the Screen Writers Guild has more women members than it’s had in years.” Among the SWG members currently making sales is Yvette Mimieux.
“I wrote and starred in a movie that ABC bought,” she says. “It’s in the tradition of the films of the 1940s. The woman is the catalyst for the story rather than an appendage.”
In it, Mimieux displays her fascination with appearances and reality. Calling it "a sinister love story," she built her plot around Angela de Vries, a self-reliant professional woman who interacts with three lovers and “is a different person with each one of them.”
Scheduled as a movie special for the fall season, it was written with the title Counterpoint. “But that will probably be changed,” she says, because there was a recent theatrical movie with the same name.
In Vancouver to play a starring role in Journey into Fear, Mimieux will duck behind the scenes immediately afterward to produce a film for NBC TV. Designed as a pilot for a possible new series, the 90-minute feature is called The Sisters.
Scheduled to go before the cameras in November, it will be based on a Mimieux concept and script. “As producer, I’ll have lots of artistic decisions. I’ll choose the director and cast.” One actress who definitely will not be in the cast is Mimieux herself.
The story is about “two sisters living in New York. They're both in their 20s, but have very different values.
“One is very materialistic and is your girl in Cosmo [Cosmopolitan magazine] who wants to get the rich man and get ahead. The other is a free spirit and an artist.”
Superficially the plot resembles My Sister Eileen, but, says Mimieux, “these girls are very hip, very 1970s. They’re New York-born, not two innocents from the country who are together out of mutual dependence.
“They’re now. They’re at the opposite ends of the spectrum, but where all the girls are today in terms of their desires and goals and the ways in which they go about achieving them."
In developing the project, Mimieux sees herself as contributing to the cause of entertainment rather then to any particular women’s consciousness movement.
Right now, she says, “the wife of a famous and marvellous director” is attempting to get an original screenplay produced. “She’s so involved in The Movement that her script is all rhetoric, platitudes, women’s lib and venom. It’s boring and no one wants to make it.”
Says Mimieux, “I don’t want to make movies about women’s lib. I just want to make interesting movies.
“I’m interested in terrific plots and wonderful characters. That’s what I like to go and see. I don’t want to be preached to by anybody, whether it’s women or (director) Stanley Kramer.”
Journey into Fear is her second Canadian movie. Two years ago, she was in Toronto making The Neptune Factor.
Her most memorable experience on that project was her marriage to producer-director Stanley Donen, who flew in from North Africa where he was shooting his screen version of Antoine de Saint-Exupery’s fantasy novel, The Little Prince.
Some years earlier, Donen and Mimieux had missed meeting one another at M-G-M. In the years before Mimieux’s arrival at the studio, Donan was its star choreographer and special unit director. According to Mimieux, the new M-G-M compilation film, That’s Entertainment!, currently on view [1974] at Vancouver’s Stanley Theatre, is in the right house.
“Most of the films in it are Stanley’s,” she says with undisguised pride. “A lot of the great numbers”— among them Gene Kelly’s dance routine with an animated Jerry the Mouse and Fred Astaire’s up-the-wall, across-the-ceiling number — “are his.”
Currently the thing Mimieux looks forward to most is making a movie with her husband. “We have an idea,” she says, “a delicious idea for a real movie-movie. Something really cinematic.” When it's ready, she says, it will be “entertainment.”

Afterword: Yvette Mimieux’s TV movie, written as Counterpoint, went to air on the evening of October 8, 1974. It was titled Hit Woman. A “strong role,” it starred Mimieux as a Mafia contract killer. The Los Angeles-born entertainer’s analysis of  the problems facing creative women in the Hollywood of her day continues to echo today — see New York Times critic Manohla Dargis’s December 2014 feature In Hollywood, It’s a Men’s, Men’s, Men’s World  and Hilary Weaver’s recent Vanity Fair item 2016: The Year That Women in Hollywood Fought Back — as well as a Mimieux-like determination to be involved in positive change. Sadly, her enthusiasm for The Sisters was not shared by NBC executives, and nothing more was heard of it.
In 1984, she did receive writer and producer credits on the CBS-TV movie Obsessive Love, a drama in which she had the starring role. By that time, Mimieux was no longer making theatrical features. Her last big-screen pictures were two independently-made films (1976’s Jackson County Jail and 1981’s Circle of Power) and Disney’s 1979 sci-fi epic The Black Hole. Her marriage to Donen ended in 1985 and, just over a year later, she married California real estate mogul Howard Ruby. Mimieux worked in television until 1992, then retired to pursue her other interests, including anthropology, yoga and the real estate business. She turns 75 today (January 8).