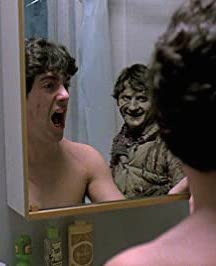 
Crossing the pond with fang in cheek


Undead best buddy to a potential mass murderer is not the easiest role to make funny. Griffin Dunne, born on this day (June 8) in 1955, managed to pull it off in writer-director John Landis’s 1981 horror-comedy An American Werewolf in London.

AN AMERICAN WEREWOLF IN LONDON. Music by Elmer Bernstein. Written and directed by John Landis. Running time: 97 minutes. Restricted entertainment with the B.C. Classifier's warning: some coarse language, gory violence, nudity and suggestive scenes.
EVER NOTICE HOW THE people in modern-dress horror movies act like they’ve never seen a horror movie? Writer-director John (Animal House) Landis certainly has.
His answer is a quirky, marvellously self-aware film in which troubled werewolf-to-be David Kessler (David Naughton) tries to explain his predicament to his girlfriend Alex Price (Jenny Agutter) by telling her about The Wolf Man.
“You mean the one with Oliver Reed?” she says with commendable sophistication. (She’s British, you see, and remembers the English-accented 1961 Hammer Films remake.)
“No, no,” he says, and goes on to describe Univeral Pictures' original version of the story, the 1941 feature with Lon Chaney, Jr.
Landis, whose resolutely fang-in-cheek approach to screen shock seems to owe a great deal to EC Comics, is an original in his own right. His picture is a likely candidate for cult status among true horror film fans.

Afterword: It was summertime, and returning from a brief vacation I published a column offering brief reviews of a number of movies that had opened in my absence. Among them was John Landis’s horror comedy, a picture that has since been recognized as a genre film landmark. Not mentioned in my capsule notice was the contribution of Griffin Dunne in his first feature-film starring role. As Jack Goodman, he plays title-character David Kessler’s best friend and companion on a backpacking holiday in England. The plot is set in motion when they’re attacked by a wolf on the moors. Jack dies. Or does he? For the rest of the picture, a decomposing Jack appears to David to offer snarky commentary and bitter advice. “Kill yourself, David, before you kill others.”
Dunne, who turns 65 today (June 8), was born to celebrity. The eldest son of New York-based writer-producer Dominick Dunne and the nephew of Los Angeles power couple John Gregory Dunne and Joan Didion, he entered the family business early and found his own place in it as an actor, producer and director. Acknowledging his senior status in 2018, he joined the cast of NBC-TV’s family drama This Is Us, where he plays Vietnam veteran Nicky Pearson, the brother of series principal character Jack Pearson (Milo Ventimiglia).