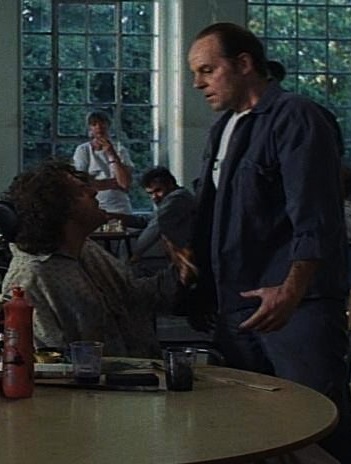 
Finding a different way to do things


Born on this day (February 12) in 1950, Michael Ironside is often cast as the guy you don't want to mess with. He worked a socially-responsible variation on the theme, and demonstrated a talent for screenwriting, during a 1990 visit to Vancouver to produce the action drama Chaindance.

Friday, November 15, 1991.
CHAINDANCE. Written by Alan Aylward and Michael Ironside, based on an original screenplay by Alan Aylward. Music by Graeme Coleman. Directed by Allan A. Goldstein. Running time: 109 minutes. Restricted entertainment with the B.C. Classifier's warning: "some violence, very coarse language and occasional nudity." ILENE CURTIS (RAE DAWN Chong) believes in goodness, good guys and good ideas.
You can't say such things out loud, of course, not if you want to function effectively in government bureaucracies. An effective functionary, Curtis has packaged her hopelessly liberal notions in a fiscally responsible new program.
Its mission is to improve the cost-effectiveness of both the penal and social services system by turning time-servers into care-givers. Its action plan is to eliminate meaningless penitentiary make-work by giving carefully selected prisoners real jobs in long-term treatment facilities, providing for the severely disabled.
Joseph Terrence Blake (Michael Ironside) believes in friendship, fairness and getting even. A repeat offender, he hasn't managed to function well in mainstream society. Blake is among the inmates mustered for Curtis's consideration on the day she visits the Mountain Hill Penitentiary in search of "volunteers" for her pilot program.
Much to his disgust, he makes the cut. The next morning, he is among the prisoners bussed to the Wilmot Convalescent Hospital, where he is chained to the wheelchair of an ungrateful cerebral palsy patient named Johnny Reynolds (Brad Dourif).
No example of saintly forbearance, Reynolds is profane, demanding and gross. "Johnny is what you inmates would call a hard case," Curtis says.
Believe it. Chaindance, filmed locally last year [1990] in Oakalla prison and an abandoned Riverview Hospital wing, is a different kind of prison picture.
Based on a screenplay by Alan Aylward and actor Ironside, it promotes the optimistic idea of rehabilitation through self-actualizing community service.
As directed by Montreal-based director Allan A. (The Outside Chance of Maximilian Glick) Goldstein, it is a pleasingly positive, socially-progressive drama packaged as a tough-talking action-thriller.
It opens with some downtown violence. It's propelled by a revenge plot involving a psychotic inmate named Casey (Bruce Glover), who fixes his lethal attention on loner Blake.
What makes it different is Blake's believable conversion to Curtis's belief that "being able to accept a different way of doing things, that's where it starts."
Ironside, a versatile performer too long wasted in villain roles, is terrific as the good bad guy awakening to the potential within himself.
Dourif, often cast as a psycho, skilfully combines anger, intelligence and vulnerability in the physically demanding role of the handicapped hard case.
Together, they forge a relationship that is the true heart of the picture, as the prisoner recognizes in his wheelchair-bound charge a man more profoundly imprisoned than he could ever imagine.
Not trusting enough in the basic strength of their tale, the screenwriters have enhanced the picture's inner-city commercial potential with a slam-bang confrontational climax emotionally out of sync with its better instincts.
The guns and gore notwithstanding, they still deliver the best debt-to-society drama since Nick Nolte took his show on the road in the under-rated 1987 feature Weeds.

Afterword: On an earlier visit to Vancouver,  Montreal's Allan Goldstein directed the spy thriller Cold Front (1990), a feature from which he insisted that his name be removed. Chaindance, the recipient of four Genie Award nominations, including best picture, was a feature in which he could take pride. In crafting the screenplay, Alan Alward drew upon his own experience as the producer of The Disability Myth (1981-1982), a CTV documentary mini-series. Most responsible for getting the picture on to the screen, though, was actor Michael Ironside. Approached by Alward in 1988, he co-wrote the script and took on the task of executive producer, shepherding the independent feature project through its two-year pre-production phase. A performer who divides his time between Hollywood and Canada, the Toronto-born Ironside made his feature film debut playing a drunk in Craig Russell's Outrageous! (1977). His breakout role came in the 1981David Cronenberg thriller Scanners, in which he played Darryl Revok, the telepath whose head explodes in the film's finale. Steady work followed, including showy supporting parts in big-budget items such as 1986's Top Gun, the original Total Recall (1990), Starship Troopers (1997) and The Perfect Storm (2000). "I'm never going to be the lead-actor guy," he told podcaster Ray Carsillo in a 2010 interview. "I’m real quiet and real happy and real fortunate to keep working. It’s what I do." With more than 200 acting credits to date, he's often seen in miltary uniforms. My own favourite recent Michael Ironside sighting was in the made-in-Vancouver TV series Smallville, the four episodes in which he played upright General Sam Lane, father of the show's lovely Lois (Erica Durance).