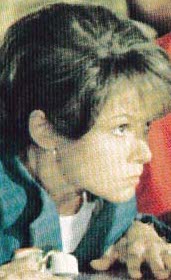 
When this week’s 2016 Democratic Convention names Hillary Clinton its presidential nominee, she’ll have the mom-like task of of bringing together a diverse nation. Barbara Harris, born on this day (July 25) in 1935, faced a similar challenge in the 1974 family comedy Mixed Company.

Tuesday, November 5, 1974.
MIXED COMPANY. Co-written by Mort Lachman. Music by Fred Karlin. Co-written, produced and directed by Melville Shavelson. Running time: 109 minutes. Mature entertainment with the B.C. Classifier's warning: some coarse language. BIG FAMILIES ARE OUT of fashion. In the real world, a combination of social concern and individual preference has made childlessness an acceptable and sometimes even a preferable choice for married couples.
Movies about big families, on the other hand, remain popular. Their worlds are charmingly idealized and the conflicts that occur within them are always resolved by the kind of growth that is nourished by unwavering parental love.
Big-family movie interest peaked in 1950, the year that Clifton Webb played an eccentric efficiency expert named Frank Gilbreth in Cheaper By The Dozen. Based on a true story, it focused on a family of 12.
Interest peaked again in 1968, when producer-director Melville Shavelson upped the ante. He found a true story about a widowed mother of eight (played by Lucille Ball) who married
a widowed father of 10 (Henry Fonda), a marriage that resulted in the birth of their 19th child. The film was called Yours, Mine and Ours.
Social circumstances seem to have caught up with such outsized mating urges in the mid-1970s. The result is Shavelson's latest feature, Mixed Company, a feature that alternates between  being cloying and convincing, as well as between being annoying and engaging.
Although there are certainly true stories with similar elements around, his current film's plot is a fictional contrivance. Pete Morrison (Joseph Bologna) is the blustery coach of a pro basketball team, the Phoenix Suns, and the father of three children. He has been rendered sterile by a case of late-in-life mumps.
His wife Kathy (Barbara Harris) desperately wants another child. She convinces him that they should adopt 12-year-old Freddie (Haywood Nelson), a problem child whose adoption prospects are particularly dim because he is black.
Freddie becomes Pete's second black problem child. His first is Walt Johnson (Ron McIlwain), the Suns' superstar. Johnson's playing has been off, a problem exacerbated by the fact that the team is on a losing streak.
Before the film is half over, the Morrison family has swollen to twice its original size. Freddie, Liz (Lisa Gerritsen), Rob (Eric Olson) and Mary (Ariane Heller) are joined by Vietnamese orphan Quan (Jina Tan), and Hopi Indian Joe (Stephen Honanie), a pair of children with problems of their own to contribute.
As a film, Mixed Company's major problem is proportion. Almost everything in it has been blown up to larger-than-life size in order to increase the comedy.
Shavelson's insistence on excess shows up in the first reel. A scene introducing Pete's professional problems turns into an unnecessary fantasy in which the losing coach is lynched by a mob of irate fans led by his own wife and children.
Significant bits are underlined and printed in visual bold face. Freddie's arrival at their home, for example, is accompanied by neighbours' stares as The Battle Hymn of the Republic is heard on the soundtrack.
Making up for such obvious gimmickry are some tellingly funny bits of dialogue. After Freddie's arrival, good neighbour Al (Tom Bosley) comes over for a congenial drink and some discussion of property values.
“Hey, Al,” asks Pete with sincere concern. “Have you ever thought of yourself as a no-good, two-faced bigot?”
“Yeah,” says Al, raising his glass to salute his host. “Why do you think I drink?”
Included in the mix is a touch of real poignancy. Dragged off to an orphans' picnic to meet Quan and Joe, Pete finds the children collecting adult visitor signatures in little notebooks. For every 10 signatures they get a dollar.
Pete notices that Quan is not gathering names like the rest. “Don't you want me to sign your book?” he asks.
“I’m not for sale, soldier!” the Vietnamese child snaps back coldly.
Later, when a helicopter bearing a pre-Christmas Santa Claus sweeps over the park, Quan runs from it, terrified. “Helicopter! Run! Hide!” she screams at the rest of the children. “Helicopter!”
Shavelson, a director with numerous kid-filled movies to his credit, has assembled a cast of first-rate child performers. Almost lost in the crowd is teenaged Lisa Gerritsen, a tower of quiet strength playing Liz, the family's eldest daughter.
Filmgoers will remember Gerritsen as Linda, the stammering child who won Jack Lemmon's Thurberesque heart in Shavelson's 1972 feature, The War Between Men And Women, a movie that also starred Barbara Harris. In the current film, unfortunately, Harris is a disappointment.
Here she plays a dotty, doting mother, with mannerisms akin to acute tics. On the whole, she is called upon to demonstrate more heart than head. In a superficially-written role, her ultimate weapon against her increasingly agitated husband is tears.
Mixed Company is a movie with a lot wrong with it. Enough is right, though, to short-circuit most criticisms. It made me cry a little, and laugh a lot. Despite its flaws, I ended up liking it.

Afterword: Barbara Harris is no dumb blonde. A Broadway stage actress with a background in improvisational theatre, she brought a depth to her feature film comedy roles that made for lasting impressions. She was, for example, part of the small army of players that director Robert Altman enlisted for his 1975 feature Nashville. That was the movie that immediately came to mind six weeks ago, when a 22-year-old singer named Christina Grimmie was shot to death following a concert in Orlando, Florida. In Altman’s film, a classic meditation on celebrity and politics, viewers expect an assassination to take place at a political rally organized to promote Replacement Party presidential candidate Hal Philip Walker. What no one expects its that the shooter’s target is the apparently beloved country singer Barbara Jean (Ronee Blakley). As bystander Winifred, a runaway wife and wannabe star, Barbara Harris is suddenly centre stage, where she makes an indelible impression singing a song with the lyric “you may say I ain’t free / It don’t worrry me.”