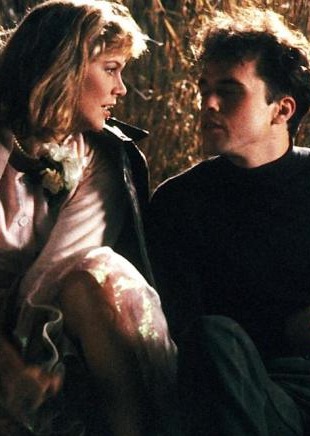 Peggy Sue Kelcher (Kathleen Turner) considers what might have been during an evening under the stars with poetic classmate Michael Fitzsimmons (Kevin O'Connor) in the 1986 time-travel comedy Peggy Sue Got Married.


Today (October 2), VCON 40 opens at the Sheraton Vancouver Airport Hotel in Richmond. B.C. The 2015 edition of Vancouver's longest-running science-fiction and fantasy convention has as its guest of honour Joe Haldeman, author of the influential 1974 novel The Forever War. Noting that Marty McFly is due back to his future this month — the date Wednesday, October 21, 2015 is cited in Back to the Future Part II — the con has taken Time Travel as its theme. I'll be attending the three-day event, where on Sunday afternoon I'll take part in a panel called Worlds of Whedon. (Focusing on the latest accomplishments of the ever-creative Joss Whedon, this panel has been a VCON tradition since 1999.) Saturday morning, I'll be one of the five folk discussing Time Travel in Film, which also happens to be the subject of today's Reeling Back coverage. I find it fascinating that science fiction's most influential time-travel tale (H.G. Wells's novella The Time Machine) was published in 1885, the same year as the Lumière brothers projected the first moving pictures to a paying audience, in effect introducing the world to a real time machine. Ever since, the movies have carried us forward and backward, playing with the possibilities and paradoxes of what are essentially impossible dreams. One of my own favourite examples of the genre is that rare comedy from Godfather director Francis Ford Coppola, 1986's Peggy Sue Got Married

Friday, October 10, 1986.
PEGGY SUE GOT MARRIED. Written by Jerry Leichtling and Arlene Sarner. Music by   John Barry. Directed by Francis Coppola. Running time: 103 minutes. Mature entertainment with the B.C. Classifier's  warning: occasional swearing and suggestive language. RICHARD NORVIK (BARRY MILLER) has never had an experience quite like it. Buchanan High School's senior class genius, he's used to being shunned by the guys. The girls call him names like "geek" and "brain."
Today, though, pretty Peggy Sue Kelcher (Kathleen Turner) sat with him at lunch. Now, the lively and popular cheerleader has him cornered in the science lab, overwhelming his teenaged nervous system with her nearness, and with her off-the wall questions.
"Richard," says Peggy Sue with unexpected desperation. "Do you think time travel is possible?"
Francis Ford Coppola has never made a movie quite like it. The American film industry's epic genius, he's best known for his violent examinations of such archetypal national embarrassments as the mafia (in The Godfather pictures), the Vietnam war (in Apocalypse Now) and racism (in The Cotton Club).
To date [1986], Coppola has directed 14 features. Until now, that list included only one deliberate comedy (You're A Big Boy Now; 1966) and only one film in which a female is the central character (The Rain People; 1968).
With his terrific new picture, Peggy Sue Got Married, Coppola breaks new ground. A comedy with a female perspective, it tells the story of 43-year-old woman who faints at her 25th high school reunion and wakes up in the year 1960, back in her high school class.
Of course, it's going to be compared to last year's blockbuster hit Back to the Future. But look again. The pictures are not at all alike.
A teen picture, the Michael J. Fox  feature was the tale of a modern kid who drops back into the 1950s and interacts with his his own parents' teen generation. Peggy Sue, by contrast, is an example of adult wish fulfillment.
"If I knew then what I know now," she muses to her friends at their 1986 reunion. A few minutes later, as she confronts her parents and peer group in 1960, she does know. As a result, she is able to bring a self-assured adult sensibility to bear on every situation.
As written by the husband-and-wife team of Jerry Leichtling and Arlene Sarner, Peggy Sue is the former prom queen who married her high school sweetheart and has come to regret it. Offered the gift of a second chance, she sets out to "do things a lot differently."
Mindfui of her failed future marriage, she puts boyfriend Charlie Bodell (Nicolas Cage) at arm's length. Drawing on her own deeper appreciation of herself and others, she seeks out the company of the class outcasts — a darkly handsome Bohemian named Michael Fitzsimmons (Kevin O'Connor) and the gawky, brilliant Norvik.
Although the picture  was originally announced as a Debra Winger vehicle with Penny Marshall directing, the project was passed on to Coppola, who had the good sense to cast the incomparable Turner in the title role.
Together, they have produced a 1960s variant on the classic It's A Wonderful Life, a contemporary fantasy with both humour and substance.
A fine, funny feature, Peggy Sue Got Married is is triumphant comeback for Coppola. But, I wondered as the film ended, given its adult orientation and distaff skew, is it likely to be a hit?
"Of course it's a hit," my wife said. "Every woman who sees it is going to tell her friends."

Afterword: Peggy Sue Got Married is a film full of delightful surprises, including the Canadian comic Jim Carrey in his third Hollywood feature film appearance. He plays Walter Getz, a member of Charlie Bodell's rock quartet. My two favourite moments from the picture feature Peggy Sue interacting with her parents. The first is with her dad (Don Murray), when he arrives home in his new car. Peggy Sue's eyes widen. "You bought an Edsel! " The second is when Peggy Sue's mom (Barbara Harris) decides it's time for "the talk." Her concise advice to her 18-year-old daughter: "Peggy. You know what a penis is? Stay away from it."
After the phenomenal success of the first two Godfather pictures, Francis Ford Coppola  shortened his directorial credit to the simpler Francis Coppola for his phantasmagorical 1979 war film Apocalypse Now. Thereafter, he plunged into a series of box office disappointments, a five-year run of financial failures that began with the ambitious 1981 musical One from the Heart, and includes The Outsiders and Rumble Fish (both 1983) and 1984's The Cotton Club. Then, just as my wife said in the above review, his sci-fi comedy Peggy Sue Got Married gave him a hit. The picture earned Kathleen Turner an Oscar nomination for best actress, and gave Coppola's nephew, actor Nicolas Cage, a solid career boost. Coppola also found work for his then 14-year-old daughter Sophia, who played Peggy Sue's kid sister Nancy.
In 2001, British actress Ruthie Henshall was an Olivier Award nominee for her title role performance in the musical adaptation of Peggy Sue Got Married. Favourably reviewed, the London West End stage production was well on its way to becoming a hit when the 9/11 event occurred in New York. The show was one of the many theatrical casualties that followed the sudden drop in tourist traffic to Britain that year.