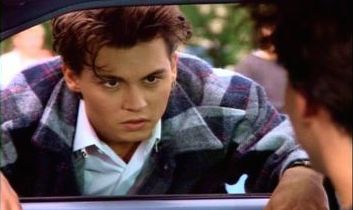 For actor JOHNNY DEPP it all started on the streets of Vancouver.


Celebrating his 53rd birthday today (June 9, 2017), actor Johnny Depp has enjoyed one of Hollywood’s most eclectic careers. To mark the occasion, try our Reeling Back J.D. Quiz which, naturally, focuses on the famously unpredictable performer's many Vancouver connections.

SHE-WHO-MUST-BE-OBEYED has requested a quiz focusing on Johnny Depp, currently starring in some kind of supernatural swashbuckler at a theatre near you. The trick, of course, is to connect the Kentucky-born heartthrob to Vancouver or to VCON, Vancouver’s annual science fiction convention.

1.    Despite five early feature film roles, Johnny Depp was still an unknown when he accepted the role of Officer Tom Hanson in a television series shot on location in Vancouver. Name the 1987-90 show that launched his career and turned him into a teen idol.

2.    The poster art for VCON 34 depicted an underwater zombie walk. It was based on storyboards the convention’s Artist Guest of Honour Miles Teves did for a 2003 feature that introduced audiences to Depp as a maritime miscreant. Name the film; name the character he plays.

3.    When tragedy threatened to shut down production on fantasy auteur Terry Gilliam's 2009 feature film,, Depp flew into Vancouver to take part in its completion. Name the film; What tragedy befell it?

4.    Billed as “Torch Singer,” Nanaimo's own Diana Krall is on screen singing the 1926 standard "Bye Bye Blackbird,"  the love theme for doomed lovers played by Depp and Marion Cotillard in a retelling of a classic American tale of crime and punishment. Name the film; name the bad boy he plays.

5.    Depp recently starred in a fantasy feature that adapts the plot and takes its title from a 1987 novel by VCON 27 Guest of Honour Tim Powers. Name the film; name the character he plays.

BONUS QUESTION:
Depp was the star, but Vancouver-born Carrie-Anne Moss had an important supporting role as Caroline Clairmont, a widow determined to avoid temptation in a God-fearing French village. Name the 2000 film in which Depp played a raffish gypsy named Roux.


ANSWERS:
1     21 Jump Street; He starred in 80 episodes during the first four of its five seasons.

3     The Imaginarium of Doctor Parnassus (2009). Production was halted when its star, Heath Ledger, died of a drug overdose.

The above is a restored version of a VCON 36 website quiz by Michael Walsh originally posted in 2011. For additional information on this archived material, please visit my FAQ.

Afterword: In 2011, I contributed a series of quizzes to the website promoting Vancouver’s annual science fiction convention, known locally as VCON. As noted above, the idea was to craft some connections between the topic — in this case the actor Johnny Depp — and Vancouver. At the time of the posting, the fourth Pirates of the Caribbean feature (2011’s On Stranger Tides) was still on view in local theatres. Entirely by coincidence, this Reeling Back posting comes shortly after the release of the latest entry in the franchise, 2017’s Dead Men Tell No Tales. Incidentally, one of Depp’s best screen performances, the title role in director Tim Burton’s Ed Wood (1994), occurs in a movie with no known Vancouver connection.