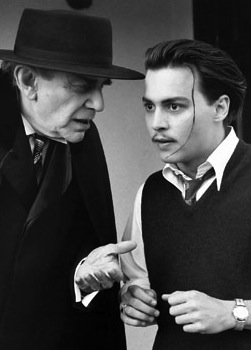 
Vancouver take note: Sunday (June 7), at a ceremony at City Hall, Montreal Mayor Denis Coderre honoured Al Pacino, giving the actor the Key to the City. A performer with few direct connections to Montreal, Pacino is best known for his bad boy roles in films such as The Godfather, Scarface and Donny Brasco. It's time for Vancouver Mayor Gregor Robertson to step up and pay tribute to our own favourite bad boy, Johnny Depp, star of Blow, four Pirates of the Caribbean pictures and, well, Donny Brasco. The best part is that Depp, born on this day (June 9) in 1963, has solid local connections. In 1987, the young actor made his career breakthrough playing baby-faced undercover cop Tom Hanson on the hit TV series 21 Jump Street. During the Vancouver-made show's first four seasons, Depp got to know our city — including its jail, following a March 1989 arrest on assault charges — and establish his own bad-boy reputation. The city, in turn, became known for its versatility as a production centre as more major series came and stayed. With the exception of a flying visit in 2008 (for director Terry Gilliam's The Imaginarium of Doctor Parnassus), Depp's not been back since. Currently ranked among Hollywood's top stars, he does his best work in collaboration with director Tim Burton. To date, they've made eight wonderfully eccentric films together, including the 1994 fantasy-biography Ed Wood

Friday, October 7, 1994.
ED WOOD. Written by Scott Alexander and Larry Karaszewski. Based on incidents in the life of Edward Davis Wood, Jr. Music by Howard Shore. Directed by Tim Burton. Running time: 124 minutes. Mature entertainment with the B.C. Classifier's warning "occasional very coarse and suggestive language." HOW CAN I NOT LOVE Ed Wood?
Director Tim (Batman) Burton's fantasy-biography is a wonderfully idiosyncratic vision that strikes all the right emotional and intellectual notes. A true dream-weaver, this master of modern myth imparts a sure touch to the (almost) true story of Edward Davis Wood, Jr., a talent-challenged filmmaker undaunted by the overwhelming odds facing fringe artists in 1950s Hollywood.
Some filmgoers will love it for the performances. Industry touts are already proclaiming Martin Landau an Academy Award front-runner for his heart-rending portrayal of the drug-addicted Bela Lugosi.
Landau is part of a first-rate cast that includes Jeffrey Jones as the sonorous psychic Criswell, Sarah Jessica Parker as Wood's girlfriend, and truly awful leading lady, Dolores Fuller, Bill Murray as wistful, would-be transsexual "Bunny" Breckinridge, and Patricia Arquette as tolerant Kathy O'Hara, Wood's eventual true love.
Wood, best known as the writer-director of the "world's worst movie," 1959's Plan 9 From Outer Space, is played to perfection by Johnny Depp. He disappears so thoroughly into the character — a broad, relentlessly upbeat interpretation combining Ronald Reagan with a generic game show host — that I had to remind myself that he's the same actor who had the title role in Burton's previous film fantasy, Edward Scissorhands.
Some will love it for its film lore. Drawing upon his gift for dark romanticism, Burton offers us the best movie about the movies since Robert Altman's The Player.