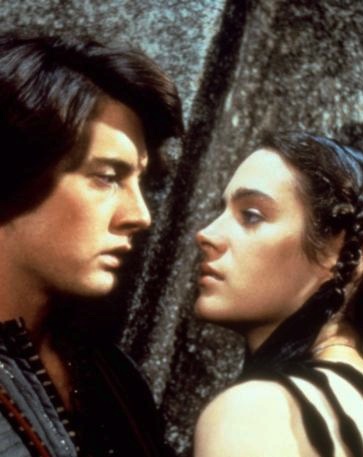 
It was a simpler time. In the late 1950s, inspired by a trip to the Oregon Dunes, magazine writer Frank Herbert began a study of Middle Eastern history, focusing on the life and times of the Prophet Muhammad (peace be upon him). The result was the 1965 novel Dune, a science-fictional reworking of that story that won both the Hugo and Nebula Awards, while giving no offence to the faithful. Thereafter, Herbert built upon his success, tuning his most famous work into a six-novel series. In the mid-1970s, the Paris-based filmmaker Alejandro Jodorowsky set out to bring the book to the screen. (His insanely ambitious plans were recently celebrated in the 2013 documentary feature Jodorowsky's Dune.) When the French effort collapsed, Italian movie mogul Dino De Laurentiis picked up the rights. He hired Alien director Ridley Scott, a second attempt that came to naught. It was De Laurentiis's daughter Raffaella, a producer in her own right, who finally put all the pieces together. In 1984, she released writer-director David Lynch's feature adaptation. Lynch, born on this day (January 20) in 1946, brought his own neo-baroque vision to the project, one that met with the approval of the author, but not with the mainstream critics of the day. My notice, as it turned out, offered a rare positive opinion of Dune.

Friday, December 28, 1984
DUNE. Based on the novel by Frank Herbert. Music by Toto. Written and directed by David Lynch. Running time: 140 minutes. Mature entertainment with the B.C. Classifier's warning: May frighten young children; some gory violence. THE TIME OF WAITING IS at an end. For the peoples of the known universe, a prophecy is about to be fulfilled. The time of the Kwisatz Haderach, "the one who will bridge space and time," is at hand.
The alien, Melange-dependent Navigators of the Spacing Guild sense it. They fear the consequences of his coming and insist that Shaddam (Jose Ferrer), the Padishah Emperor, enter into an agreement with the evil Baron Vladimir Harkonnen (Kenneth McMillan) to murder young Paul Atreides (Kyle MacLachlan) before he realizes his potential power.
Opposed to them is the Bene Gesserit, a secret sisterhood of telepathic women, who desire the prophecy's fulfillment.
That "one will come bringing the Holy War, the Jihad, which will cleanse the Universe and bring us out of darkness,'' is also an  article of faith among the Fremen of Arrakis, the desert planet commonly known as Dune.
Star Wars it isn't. Filmgoers who set off for Dune expecting cosmic cowboys and Indians are courting disappointment.
Former Seattle newspaperman Frank Herbert, the author of the 1965 novel, conceived Dune "as a book on the messianic impulse in human society." His tale is loosely based on the world of and events in the life of the seventh-century prophet Muhammad, the founder of Islam.
Writer-director David Lynch has respected Herbert's sober intent. His voluptuous, eye-filling feature owes more to Korda's 1940 The Thief of Baghdad, Eisenstein's Ivan the Terrible (1945) and DeMille's The Ten Commandments (1956) than to the current crop of sci-fi adventures.
The "future'' world of Dune exists in a Byzantine universe of low ceilings and even lower cunning. At the centre are the feuding houses of Atreides and Harkonnen.
The Atreides, represented by Duke Leto (Jurgen Prochnow), his Lady Jessica (Francesca Annis) and their son Paul, are the good ones. An attractive and neatly uniformed people, they have a deep respect for human life.
Harkonnens, by contrast, are unkempt and disgusting, unwholesome in thought, word and deed. The contending forces battle it out for control of Melange-rich Dune, with its deadly, man-munching sandworms and deep mystic secrets.
Though I've never read Herbert's obviously complex novel, I had little difficulty following Lynch's film version despite its large contingent of characters, motives and movements. Rather than being faulted for not being George Lucas, he should be credited for his singularly intense, distinctively baroque vision.
Whether Lynch's brand of serious fantasy will have much mass audience appeal remains to be seen. What's certain is that the cult that grew up around the director's independently-made first feature, 1977's Eraserhead, will find its logical extension in Dune..

Afterword: For actor Kyle MacLachlan, Dune was the beginning of both a friendship and a continuing working relationship with David Lynch. He had the starring role in Lynch's next feature film, the seriously creepy Blue Velvet (1986), and went on to play Special Agent Dale Cooper in all 30 episodes of Lynch's cult classic TV series Twin Peaks (1990-1991). They'll be back together again in 2016 when a new, nine-episode Twin Peaks limited series goes to air on the Showtime cable network.
Despite three best director Oscar nominations — for 1980's Elephant Man, Blue Velvet (1986) and Mulholland Dr. (2001) — Lynch's idiosyncratic filmmaking style limited the commercial prospects of his pictures. As a result, Hollywood's corporate production companies, dedicated to maximizing profits, sought out other folk to make their popcorn pictures. In this century, he's satisfied himself with directing film and video short subjects seen at festivals, on TV or the Internet.

See also: In early 2004, a friend asked me my opinion of Lynch's enigmatic feature Mulholland Dr. (2001), which had been released on DVD. Specifically, he asked me to decode "David Lynch's 10 Clues" to the meaning of the film that were included in the package. Intrigued, I set out to do just that, a close study of the picture that I detailed in this personal note.