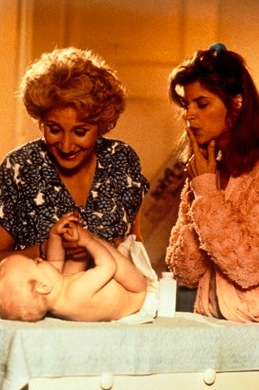 A source of advice and support for her daughter Mollie (Kirstie Alley, right), Rosie (Olympia Dukakis) is nearby in all three of the Look Who's Talking pictures.

Dogs having their day

Sunday, November 7, 1993.
LOOK WHO'S TALKING NOW. Co-written by Leslie Dixon. Based on characters created by Amy Heckerling. Music by William Ross. Co-written and directed by Tom Ropelewski. Running time: 97 minutes. Mature entertainment with no B.C. Classifier's warnings. YOU SAY THE FILM BUSINESS is going to the dogs? You say that Look Who's Talking Now is all bark and no bite?
Where is your gratitude? Where, for that matter, is your civic pride?
Admittedly, the picture's combination of kids, canines and Christmas is just too cute for words. Its television sitcom sensibility is a Pavlovian bell that calls forth critical venom.
Try to think happy, happy! Feel joy, joy! for our friends and neighbours in an industry whose products attract return business to British Columbia.
Look Who's Talking, the locally-filmed romantic comedy narrated by an unwed mom's infant son, was the most successful feature in the history of TriStar Pictures. Like the folks who made 1987's Stakeout here, they came back.
Look Who's Talking Too (1990) featured a new domestic crisis and two baby commentators. It did well enough to prompt a second sequel, one with a pair of outspoken pets.
Actress Kirstie Alley deserves some kind of award from the Board of Trade. Look Who's Talking Now, her third outing as Mollie Ubriacco, is actually her fifth Vancouver-made feature.
John Travolta is also back. As Mollie's good-hearted (if dim-witted) husband James, he's hired as a private pilot by predatory executrix Samantha D'Bonne (Lysette Anthony). It takes him forever to realize that her intentions are far from honourable.
Mollie, of course, notices the sweet smell of deception right away. Although Mollie's ever-supportive mom, Rosie (Olympia Dukakis), insists that James's love for her is true, Mollie's not so sure. Adding to her stress levels are a pink slip ending her executive career, a kid suddenly skeptical about Santa and two dogs locked in a class struggle.
Without so much as a by-your-leave to Peggy Lee, writer-director Tom (Madhouse) Ropelewski popped in his own live-action Lady and the Tramp cartoon. Danny De Vito, who was born to play a mutt, provides the voice of the "tick magnet" the kids call Rocks.
Diane Keaton, as the overbred poodle Daphne, is his verbal sparring partner. Though the film is set in Manhattan, our four-footed heroes are front and centre when a wolf pack emerges from a Christmas Eve blizzard to endanger the family.
That's silly, you say? I agree.
But then I remember a silly song from Nashville, a movie made by Robert Altman, the first major Hollywood player to really talk up Vancouver as a production centre for big- time American movies:
You may say that I got fleas;
But it don't worry me.
Back me into a corner and I'll admit that Look Who's Talking Now is a dog.
But, like the Earth in Douglas Adams's Hitchhiker's Guide to the Galaxy, it's mostly harmless.

Afterword: Although she began her performing career in 1962, Massachusetts-born Olympia Dukakis wasn't recognized as a star until 1987. Six months after her cousin, Massachusetts governor Michael Dukakis, won the Democratic party's presidential nomination, her performance in director Norman Jewison's romantic comedy Moonstruck was nominated for a supporting actress Academy Award. He lost the general election to the first George Bush, and has made few headlines since. She won the Oscar, and continues to make films to this day. She's appeared in numerous TV movies, series episodes and about 50 theatrical features since, including the three made-in-Vancouver Look Who's Talking pictures. Dukakis also visited B.C. to play opposite Leslie Neilsen in director Rob Turner's 1993 family drama Digger. More recently, she's been a regular visitor to Canada's East Coast, where she enjoys a productive working relationship with Halifax-based writer-director Thom Fitzgerald. Their first collaboration, an intense, low-budget mystery-thriller called The Event (2003), resulted in a Genie Award nomination for Dukakis. Two years later, she appeared in Fitzgerald's more ambitious 3 Needles (2005), the story of a global epidemic shot on three continents. She was back in Nova Scotia to star opposite Brenda Fricker in Fitzgerald's 2011 screen adaptation of his stage play Cloudburst. In addition to the features, she was seen in five of the 12 episodes of his 2013 television series Forgive Me, and was the star of his two-season series Sex & Violence (2013-2015). The tireless Olympia Dukakis celebrates her 84th birthday today (June 20).