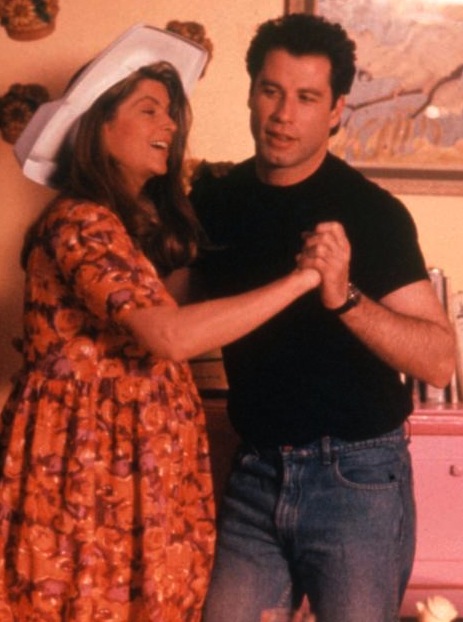 Mollie (Kirstie Alley) and James (John Travolta) celebrate an addition to their family in director Amy Heckerling's Look Who's Talking Too (1990).


Born on this day (January 12) in 1951, actress Kirstie Alley returned to Vancouver soon after the release of the surprise-hit comedy Look Who's Talking. Together with John Travolta, she went before the cameras to star in its 1990 sequel Look Who's Talking Too.

Friday, January 19, 1990
I KNOW. IT WAS supposed to be a holiday.
Time off. Time to catch up on my reading and, maybe, get out of town for a while. Can you imagine a week?
By the second week, though, I was beginning to suffer withdrawal symptoms. It was time to play catch-up on some of the movies I'd missed during the long [1989] labour dispute at Vancouver's two theatre chains.
I managed nine "new" (to me) features, two of them pictures filmed right here in B.C. It's a bit late for reviews, though.
No matter. We'll call these notes video previews:
. . .
LOOK WHO'S TALKING: A surprise hit, this slight, urban romance puts a comedic spin on the problems of unwed motherhood. Kirstie Alley brings out the best in John Travolta and they form a couple that you want to see together. Vancouver effectively masquerades as Manhattan. The mood is pleasingly buoyant, if overly cute.

The above is a restored excerpt of a Province column by Michael Walsh originally published in 1990. For additional information on this archived material, please visit my FAQ.

Afterword: For many years, I made it a practice to book two weeks of my annual vacation time in January. It was a good time to recharge the batteries after the always hectic rush of Christmas openings. In 1990, though, it turned into a classic busman's holiday. In October, 1989, an embattled projectionists' union had been locked out by both the Famous Players and Cineplex Odeon theatre chains. As union members did not cross other unions' legitimate picket lines, the dailies had to either forgo covering some film openings, or seek them out in suburban theatres not in dispute with their employees. (In one case, Vancouver Sun critic Marke Andrews and I drove together down Interstate 5 to Bellingham, Washington, for the late November premiere of 1989's Back to the Future Part II.) A settlement of sorts was reached in mid-December, and in January — on my own time — I found that I just had to play catch up. The result was a column (excerpted above), in which I offered capsule reviews of nine features, including the first of the Look Who's Talking features. What follows is my full review of that film's 1990 sequel, Look Who's Talking Too.

LOOK WHO'S TALKING TOO. Co-written by Neal Israel. Music by David Kitay. Co-written and directed by Amy Heckerling. Running time: 81 minutes. Rated Mature with the B.C. Classifier's warning "some suggestive scenes and language; occasional very coarse language." CUTE.
According to its official press notes, Look Who's Talking Too "began principal photography on June 11, only nine months after the release of the original."
A picture that traded in cute, the original was the story of Mollie (Kirstie Alley), an unwed working mom who finds love and an adoptive father for her infant son.
A romantic comedy, it offered baby Mikey as narrator. The idea was that we were tuned into the kid's thoughts. Actor Bruce Willis did the voice-over, "speaking" for the tyke much as he would for an animated cartoon character.
The film's subject matter and strained charm made it look like a leftover from the diaper days of 1987 (remembered for such nursery epics as Baby Boom, Raising Arizona and Three Men and a Baby).
Released in October 1989, Look Who's Talking was a surprise hit. And so, with hardly a pause for breath, writer-director Amy Heckerling reassembled her stars and rushed a sequel into production (eight, not nine months after the release of the original).
Since the voice gimmick had proven popular in the first feature, Talking Too doubles its unseen star power. It takes us back inside Mollie's womb to meet a new egg, one that speaks with Roseanne Barr's voice.
In the opening sequence, newlyweds Mollie and James Ubriacco (John Travolta) are making love. The special-effects artists provide simulated microphotography of sperm homing in on the target.
Though most of them bounce right off Mollie's diaphragm, one intrepid little guy manges to slip around the edge and . . . "Well, here I am," says the suddenly fertilized female embryo, "all conceived and nowhere to go."
Right from the start, Mikey has a kid sister and the picture has its second voice. All that's needed are some bright comic concepts to move things along.
Unfortunately, neither Heckerling nor her script collaborator Neal Israel could come up with any. Instead, they fall back on a lot of listless sitcom filler material, jokes about doo-doo and pee-pee, and a domestic strife storyline.
Mollie's mom Rosie (Olympia Dukakis) is disappointed with her new son-in-law. "He's a slob," she complains. "He's inconsiderate. He has the earning capacity of an illiterate immigrant."
Then Mollie's obnoxious, unemployed brother Stuart (Elias Koteas) arrives in town. Shortly after he moves in with them, James moves out.
Must Mollie choose between her husband and her family? And what about the kids?
Throughout, poor Mikey (Lorne Sussman) is having problems with Mr. Toilet Man (voice of Mel Brooks), the porcelain monster in the bathroom. Baby Julie (Megan Milner), of course, is having problems with Mikey, "my brother . . . 27 pounds of stupid."
The project, set in New York but filmed right here in Vancouver, was completed in remarkable time for a theatrical motion picture. Good-natured without being particularly good, it might have benefited from a longer gestation period.
As it is, Look Who's Talking Too is strictly for those who can't get enough of infants or infantile adults.
* * *
BUFF STUFF — Kirstie Alley's agent has some 'splainin' to do. Somehow, he's got it into his head that the Kansas-born actress is the living incarnation of Lucille Ball. What that means is that, during 1990, she's been cast to play Lucy-like domestic ditzes in no fewer than three feature comedies.
Television-weight projects all, they include Madhouse (co- starring with small-screen sitcom player John Larroquette) and Sibling Rivalry (opposite network series star Scott Bakula).
Look Who's Talking Too, yet another marital-relations comedy, does little to broaden her range. Nor will it help the Cheers lady make the difficult leap from television to movie star.

Afterword: One of Hollywood's celebrity Scientologists, Kirstie Alley made a striking feature film debut playing Lieutenant Saavik, a Vulcan Star Fleet officer, in 1982's Star Trek II: The Wrath of Kahn. Her early beauty-with-brains image won her the role of feminist author-icon Gloria Steinem in the 1985 made-for-TV movie A Bunny's Tale. A year earlier, on her first working visit to Vancouver, she was featured in writer-director Michael Crichton's Runaway. She returned to B.C. to co-star with Sidney Poitier in the 1988 thriller Shoot to Kill. Alley replaced Shelley Long in the cast of Cheers in 1987, and was a show regular for the final seven seasons of its 11-season run. Playing bar manager Rebecca Howe, she earned five best actress Emmy Award nominations (and a 1991 win). Major stardom seemed within her grasp around the time of Look Who's Talking Now (1993), the final feature in the series and her third with fellow Scientologist John Travolta. Instead, her opportunities were more small screen features and series episodes, including a seven-episode "reality" series called Fat Actress (2005) that focused on her weight problems, and the 12-episode Kirstie (2013-14), a sitcom about a middle-aged actress. On her more recent visits to Vancouver, she starred in the made-for-TV features Write & Wrong (2007) and Baby Sellers (2013).