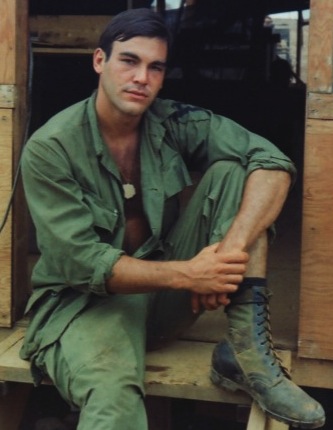 Oliver Stone during his 1968 service with the 1st Cavalry in Vietnam; in the 1980s, he drew upon his combat experience in the writing and direction of the feature film Platoon.


Socially aware and politically engaged, Vietnam veteran-turned-flmmaker Oliver Stone is one cool dude. Born on this day (September 15) in 1946, Citizen Stone remains the Boom Generation's Boomer, a man of conviction who refuses to stand down and accept the dominant historical narrative. He made his reputation with films that challenged the official "truth" on such subjects as Salvador (1986), Wall Street (1987) and Talk Radio (1988). He courted controversy with his presidential "counter-myths" in JFK (1991), Nixon (1995) and W. (2008). Though out of favour in the new, corporate Hollywood, Stone continues to speak out on the issues of the day (he supports embattled WikiLeaks founder Julian Assange and opposes the growth of the U.S. military presence overseas). In what he calls "the most ambitious thing I've ever done," he co-wrote, produced, directed and narrated the 10-episode Showtime documentary Oliver Stone's Untold History of the United States (2012). Released on DVD in March (with two additional episodes), the series channels that combination of angry skepticism and investigative journalism that characterized the best of the 1960s counter-culture. If the new series draws upon a lifetime of learning, it was foreshadowed as early as 1986, the year that Stone drew upon his own experience as in an infantryman in Vietnam to tell the story of a Platoon.

Thursday, January 15, 1987
PLATOON. Music by Georges Delerue. Written and directed by Oliver Stone. Running time: 118 minutes. Restricted entertainment with the B.C. Classifier's warning: frequent violence, very coarse language. CHRIS TAYLOR (CHARLIE SHEEN) is trying to do the right thing. A college drop-out, he joined the army in search of personal validation, undertaking an idealistic, almost romantic search for self in the crucible of conflict.
Newly arrived in Vietnam, he wants to "live up to what grandpa did in the first war, and dad did in the second." Boy, has he picked the wrong war.
Oliver Stone is doing a necessary thing. "Vietnam messed a lot of guys up,'' he's said, explaining the forces that impelled him to make a deeply personal film like Platoon. "It put us out of step with our own generation.''
Stone, a Vietnam combat veteran who has since become an Oscar-winning screenwriter (for 1978's Midnight Express) and a feature filmmaker (he wrote and directed last year's Salvador), wants to exorcise some of the horror that he experienced in the Southeast Asian jungle. As stark and powerful as 1979's Apocalypse Now,  his Platoon has the searing impact of an incoming round.
The time is 1967. Private Taylor arrives for his tour of duty expecting something akin to 1945's A Walk in the Sun (Robert Rossen's classic examination of Second World War combat on the squad level), only to discover that purpose and camaraderie are conspicuously absent in this war without fronts, obvious military objectives or a readily identifiable enemy.
At first, the impressionable Taylor is drawn to his platoon's battle-scarred staff sergeant, Bob Barnes (Tom Berenger), a man who appears to be something of a super soldier. As he gains experience, though, he realizes that the unconventional Sgt. Elias (Willem Dafoe) is every bit as effective, but without the sacrifice of his humanity.
Though both sergeants are seasoned vets, Elias has not forgotten his morals, nor the hearts and minds that they've been sent to the 'Nam to win. Less subtle, Barnes has reduced the war to a raw game of survival. "There's the way it ought to be, and there's the way it is.''
Inevitably, Barnes and Elias come into conflict, with the enlisted men — the "grunts'' — choosing up sides. It is in this "civil war in the platoon'' that Stone (through his fictional alter ego Taylor) finds his ultimate metaphor for the U.S. failure.
There is a temptation to view Stone's drama as an unofficial prequel to Francis Ford Coppola's Apocalypse Now. Charlie Sheen, the actor playing Taylor, certainly resembles his father, Martin Sheen, the star of the earlier film.
Worth remembering, though, is the fact that Coppola (who was born in 1939) based his picture on an idea by film school graduate George (Star Wars) Lucas, and his gun-buff buddy John (Red Dawn) Milius. Deliberate artifice, it was a conscious reworking of Joseph Conrad's 19th-century tale, Heart of Darkness.
Stone, born in 1946, served in Vietman, collecting two real wounds, a Bronze Star and the Purple Heart. Though his screenplay has been fictionalized and shaped to maximize the dramatic effect, his Platoon remains the most devastatingly authentic cinematic recollection of the war yet.

Afterword: Oliver Stone's social conscience was not immediately evident. Following his service in Vietnam, he entered New York University's film studies program, graduating in 1971. He made his first feature film in Canada, going on location in Quebec to direct Hamilton-born Jonathan Frid in Seizure (1974), the story of a horror writer whose villainous creations come to life. He made his professional breakthrough four years later, when his screenplay for Alan Parker's "based-on-a-true-story" thriller Midnight Express (1978) earned him his first Oscar win. His second try at directing, 1981's The Hand, was marginally more successful than Seizure, and he returned to screenwriting for others until 1986. The one-two punch of Salvador and Platoon (winner of the year's best picture Academy Award, and Stone's first Oscar win as best director), elevated him to the A-list. In short order, he completed his Vietnam trilogy (with 1989's Born on the Fourth of July and 1993's Heaven and Earth), took on American pop culture — rock 'n' roll in 1991's The Doors; celebrity outlaws in 1994's Natural Born Killers; pro sports in 1999's Any Given Sunday — and offered his counter-myths on Presidents Kennedy, Nixon and G.W. Bush. And now, with 19 fictional features on his resume, Stone is producing documentaries with all of his Boom Generation dedication to making art that makes a difference.