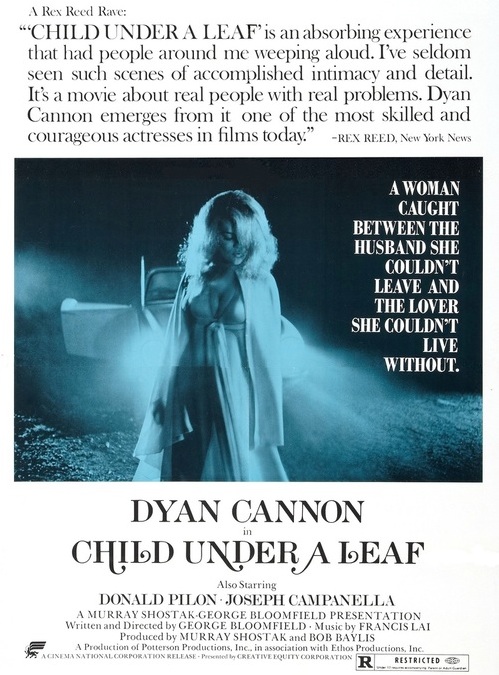 The U.S. release poster for George Bloomfield’s 1974 feature highlights “A Rex Reed Rave”: "Child Under a Leaf is an absorbing experience that had people around me weeping aloud. I’ve seldom seen such scenes of accomplished intimacy and detail . . . Dyan Cannon emerges from it one of the most skilled and courageous actresses in film today."


Among the American actors who found work in Canada during the formative years of our feature film industry was Oscar-nominee Dyan Cannon. Born on this day (January 4) in 1937, she starred in director George Bloomfield’s 1974 domestic drama Child Under a Leaf.

CHILD UNDER A LEAF. Music by Francis Lai. Written and directed by George Bloomfield. Running time: 88 minutes. Restricted entertainment. “HEY,” SOMEONE IN THE row behind me whispered. Was this movie made in Canada?”
“I don't know,” her friend whispered back. “What makes you think so?"
“Well, look. There, behind her on the other side of the street. There’s a sign that says ‘Banque de Montreal’. It’s in French!"
Sure enough. Dyan Cannon, who moments earlier had walked past an Information Canada office, is now standing across the road from an unmistakably Canadian bank. Watching her soulfully is her Canadian leading man, actor Donald Pilon.
I almost wish nobody had noticed. But it’s true. Child Under a Leaf is a Canadian movie. And it’s awful.
Filmed in Montreal, this disastrous attempt at a modern romantic tragedy is both an embarrassment and a monumental bore. Not since 1973’s The Neptune Factor has a less forgivable CFDC [Canadian Film Development Corporation] blunder turned up in a local theatre.
In this one, someone named Domino (Cannon), the pampered wife of a well-to-do but foul-tempered man, has a baby by her lover, a successful, sensitive artist (Pilon). According to a press handout from the production company, Domino’s husband Gerard (Joseph Campanella) is “in and out of mental hospitals.”
That bit of information will come as a surprise to anyone who actually sees the movie. Nowhere in director George Bloomfield’s inept original screenplay is there any mention of where her husband goes, or what he does during his frequent absences.
The filmgoer might assume that he is doing something to earn their living. Somebody, after all, has to find the money to keep his wife in the latest fashions, and pay for their luxurious home, their plush country cottage and their two expensive cars. What does he do for all this?
If Bloomfield knows, he’s not telling. As a director, he is apparently trying to succeed in the movie business without really trying. His first feature, 1969’s Jenny, was a cliché-ridden attempt to cash in on a number of then-current dramatic themes.
It featured Alan Alda as a director of TV commercials who gets “nice girl” Marlo Thomas in the family way. Needing a U.S. draft deferment, he marries her. An uneasy blend of comedy and soap-suds melodrama, Jenny was completely forgettable, and might have remained so had Bloomfield decided to quit while he was behind.
Now comes Child Under a Leaf, a film that makes poor, confused Jenny look like a masterpiece of coherent exposition. The new film’s plot has the quality of a conversation on the morning after a night before.
At the centre of it is Dyan Cannon, an actress who has made a career of slatternly roles, here exuding the wanton domesticity of an East Coast heiress. For Domino, having her lover’s child fulfills some self-destructive, malicious need.
How she ever got involved with the likes of  Joseph (Pilon), a spineless society painter, we’re never told.  Apparently, no one told Pilon either. He has little to do except stare worshipfully at Domino's pregnant belly and, later, at her milk-filled breasts.
An actor who has given strong performances in his previous films (including 1973’s The Pyx), Pilon here is cut adrift in a mire of meaningless and unspeakably bad dialogue. “My heart jumps when you say my name,” he intones with a kind of pained disbelief. Though totally bilingual, he sounds as if he is having real trouble speaking Bloomfleld’s brand of English.
At least the director went to the trouble of giving his character a name. Actor Campanella is forced to lurk about menacingly in a role defined only as “The Husband.” At one point, a female identified as “The Mother-in-Law” (Bess Bloomfield), refers to him as Gerald, but that might have been an ad-lib.
Completely wasted in a walk-on — in which she plays  “The Friend” — is Micheline Lanctôt, Richard Dreyfuss’s radiant co-star in The Apprenticeship of Duddy Kravitz.  Like Pilon, Lanctôt is as capable in English as she is in French.
Even so, for some unexplained and unforgivable reason, Bloomfield decided to erase her voice from the soundtrack. Her lines have been dubbed by someone trying to sound like Ali MacGraw.
Perhaps the director felt that Mlle. Lanctôt’s lilting Québécois accent would hurt his picture's chances in the American market (something that never occurred to Mark Robson when he cast Geneviève Bujoid to star in the multi-million-dollar Earthquake).
If so, he was wrong. The only thing that will hold Child Under a Leaf back is the fact that it’s a lousy picture.

Afterword: In the national euphoria that accompanied our Centennial year [1967], Parliament passed an Act creating the Canadian Film Development Corporation, a federal agency charged “to foster and promote the development of a feature film industry in Canada.” What that meant in practice was that the government would invest public dollars in private productions, in what proved to be a grand exercise of the bland leading the blind. Ignoring the vital importance of Canada's foreign-controlled distribution and exhibition infrastructure, the feds thought it would be quite enough just to get a bunch of pictures made.
The nation’s would-be movie moguls happily took the money, and did what they could to make commercial products, generally defined as a movie they could sell through to the larger American market. Well aware that the U.S. audience had no interest in things Canadian, they came up with the idea of casting mid-level Hollwood actors in all the marquee roles. Of the four “Canadian” films mentioned in the above review, all of them gave top billing to their American stars.
Dyan Cannon, a successful television actress, broke through as a movie star in 1969 (with her Oscar-nominated performance as the spouse-swapping Alice Henderson in Bob & Carol & Ted & Alice.) And suddenly she was everywhere, starring in eight feature films between 1971 and 1974, a burst of big screen visibility that included her working visit to Montreal for Child Under a Leaf.
Her big-screen career drew down in the mid-1980s, and she returned to television. She touched down in Canada on at least two more occasions, working as a supporting player in a Toronto-made Harlequin TV movie, 1998’s Diamond Girl, and in the title role of the Vancouver-made My Mother, the Spy (2000). Dyan Cannon turns 83 today (January 4).