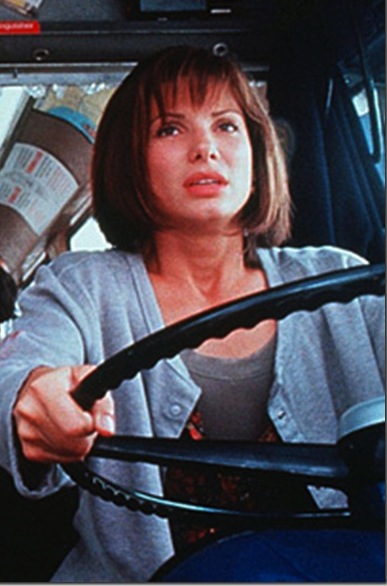 
Signed into law on this day (July 26) in 1990, the Americans with Disabilities Act was hailed as a landmark moment in U.S. public transportation policy. Since its passage, the mobility challenged have seen their access to bus, subway and light-rail systems improve dramatically. Sadly, those achievements are currently being eroded by chronic Congressional inaction on national infrastructure funding. Among those calling for federal Representatives and Senators to step up are New York's Mayor Bill De Blasio, who last week (July 24) signed a letter outlining the desperate need for mass-transit maintenance in the nation's big cities. His concerns were echoed by coalition of 81 transit unions and public advocacy groups, who've noted the July 31 expiration date on the 2012 bill that provides such funding. Compared to many other conflicts, crises and catastrophes (including Kanye West's performance at the Pan Am Games closing ceremonies) in the news, transit issues tend to be overlooked or subjected to political posturing. In Vancouver recently, voters voted "no" to a sales tax increase to fund transportation, recognizing in the referendum's question a cynical ploy by B.C.'s provincial government to avoid its responsibilities. A generation ago, the transit issue was simpler and Sandra Bullock was the answer. Born on this day (July 26) in 1964, Bullock became a star by taking the wheel of an endangered L.A. bus in Speed (1994).

Friday, June 10, 1994
SPEED. Written by Graham Yost and Joss Whedon. Music by Marc Mancina. Directed by Jan De Bont. Running time: 115 minutes. 14 Years Limited Admission with the B.C. Classifier's warning : some violence and very coarse language. QUESTIONS, QUESTIONS, QUESTIONS.
Rappelling down the elevator shaft in a downtown office tower, Los Angeles SWAT squad cop Jack Traven (Keanu Reeves) wonders why they do it.
In an effort to relieve the tension, explosives expert Harry Temple (Jeff Daniels) cracks wise. After 30 more years of this, Temple says, we'll be entitled to "an inadequate pension and a cheap gold watch."
Rushing down a California freeway in a bomb-rigged bus, Traven wonders why the bomb-builder does it.
Villain Howard Payne (Dennis Hopper) offers the perfect 1990s answer. "I wish that I had some loftier purpose, Jack." He then admits that "it's just money."
Kick-starting an inert cinema summer with a burst of welcome Speed are a first-time feature director and a debuting screenwriter. So, who are these guys?
The word man, Graham Yost, paid his dues as a comic in Toronto with the Second City stage company. A crazy Canadian, Yost shows that there's a lot of life left in 1970s-style disaster movies if you just shift the centre of attention from luxury aircraft and ocean liners to public transit.
Picture person Jan De Bont provides the visual spark. He moves into the director's chair with more than 30 years' experience as a cinematographer. Best known as Paul (Basic Instinct) Verhoeven's longtime collaborator, the Dutch-born De Bont relocated to the U.S. in the late 1980s.
He has since worked with such Hollywood action film stylists as John (Die Hard) McTiernan, Ridley (Black Rain) Scott and Richard (Lethal Weapon 3) Donner.
With Speed, De Bont makes a place for himself in their circle. A derring-do feature for Weekly World News readers, it is a breathlessly paced, wildly unlikely fable of urban endangerment, delivering the message that no place is safe.
Reeves, currently on view as the serene Siddhartha in Bertolucci's very Italian Little Buddha, is equally attractive as a modern American man of action. As Traven, the Beirut-born Toronto actor is direct, physically courageous and totally goal-oriented.
Yost's screenplay wrings extra tension out of our understanding that Traven is not the brains of the operation. "Guts will get you so far," says SWAT Lt. Herb McMahon (Joe Morton), making the point explicit.
"Then they'll get you killed."
Emerging as an action movie power girl is actress Sandra Bullock. Last summer, she held her own opposite Sylvester Stallone's Demolition Man.
Here, as "Wildcat" Annie Porter, she plays the smart-mouthed passenger who finds herself in the driver's seat of the 2525 Santa Monica InterCity express bus.
Combining girl-next-door good looks with sparkling comic timing, Bullock is the very image of the cool, 1990s Capable Woman.
With 1960s survivor Hopper providing thoroughly entertaining menace, Speed is the season's first good answer to the question: "Where's the summer fun?"

Afterword: Only recently did I learn that Joss Whedon was brought in as a "script doctor" on the Speed project. According to credited screenwriter Graham Yost, it was a congenial relationship, with Whedon writing "98.9 percent of the dialogue." It turns out that "Wildcat" Annie Porter is an early example of Whedon creating strong female characters.
No overnight sensation, the hard-working Sandra Bullock had 10 feature films and a short-lived television series — 1990's Working Girl —  to her credit before settling into the driver's seat in Speed. After that star-making role, she was the go-to actress for films involving public transit — in 1995's While You Were Sleeping, she works for the Chicago Transit Authority; in The Net (also 1995), she navigated the information superhighway. She reprised her Annie Porter role in 1997's Speed 2: Cruise Control, a reunion with director Jan De Bont that did not produce a hit. Using her obvious intelligence, she built upon her lovability — at full strength in the two Miss Congeniality pictures (2000, 2005) — to become People magazine's 2010 "Woman of the Year." That same year, Time magazine included her among its "Most Influential People in the World." Despite endless supermarket tabloid headlines about her marital mishaps, she made the Hollywood Reporter's 2013 list of its "most powerful women." Bullock won an Academy Award for her dramatic, off-type role as Anne Tuohy in 2009's The Blind Side, and was nominated for the Oscar for her performance as astronaut Ryan Stone in 2013's near-Earth-orbit epic Gravity. Bullock, who turns 51 today (July 26), wins my own personal Miss Maple Leaf award for her portrayal of Margaret Tate, the hard-driving New York ad executive in 2009's The Proposal. Faced with deportation to her native Canada, Tate demands that her American assistant, played by Vancouver-born Ryan (Self/less) Reynolds, marry her. Who could possibly refuse?