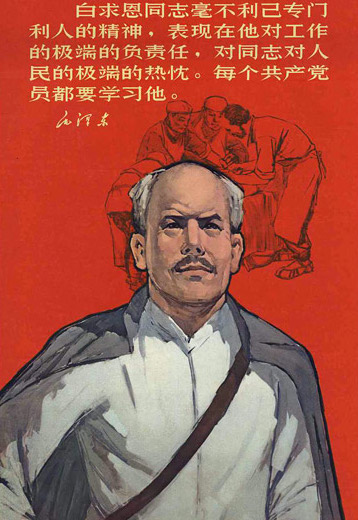 Example for the world


Selfless choice as the Canadian way


Today (October 21), as Canadians vote in 2019's federal election, it’s worth remembering that this small country has produced some great heroes. Preserving those memories can be another matter, as the 1988 documentary feature Strangers in A Strange Land demonstrates.

STRANGERS IN A STRANGE LAND: THE ADVENTURES OF A FILM CREW IN THE HEART OF CHINA. Music by Terence McKeown. Written and directed by Bob McKeown. Running time: 83 minutes. Rated General. NOT ALL DOCUMENTARIES ARE created equal. With some subjects, the documentarist assumes the role of participant-observer of an event in progress. Such was the case with Strangers in a Strange Land: The Adventures of a Film Crew in the Heart of China, a chronicle of some of the difficulties encountered by the producers of the motion picture Bethune: The Making of a Hero.
Right from the start, it was clear that Bethune would make Canadian film history. Determined to play Boswell to the domestic industry's most ambitious epic ever was CBC-TV's Fifth Estate reporter Bob McKeown.
Together with his own independent documentary crew, McKeown went on location with director Phillip Borsos and his crew in April of 1987. What they had in mind, perhaps, was a straightforward "the making of . . . " promotional short to accompany the feature's commercial release.
Instead, McKeown found himself in the middle of a breaking news story. There was the continuing dispute between the star (Donald Sutherland, in the title role) and the screenwriter (Ted Allan, adapting his own 1952 Bethune biography, The Scalpel, The Sword) about how the character should be portrayed.
There were daily disagreements between the Canadian and Chinese co-directors over the details of their historical reconstruction.
In the midst of these "normal" production problems, there was a major confrontation between labour and management, a virtual insurrection by craftsmen and women appalled by the Third World living conditions.
Internal evidence suggests the pre-production on Bethune was thoroughly inept. As a result, for almost everyone concerned the project was a dream that rapidly dissolved into a nightmare.
For McKeown, though, the materials were at hand for a solid examination of the deep-seated ills that afflict Canada's moribund feature-film industry.
Instead, he assembled the sort of bland and inconclusive report typical of the CBC, a picture strictly for Bethune buffs and industry insiders.

Afterword: At their best, Canadians can do great things. I’d like to think that the election being decided today (October 21) — the least civil in our political history — will result in a new awakening of the “unselfish spirit” that Mao Tse-tung saw in his Bai Chu En, the Gravenhurst, Ontario-born battlefield surgeon who gave his life in service to the common good.