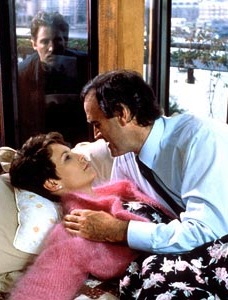 
This Fish is a gut-busting mid-Atlantic catch


A funny thing happened on the way to obscurity. Born on this day (August 6) in 1910, all-but-forgotten director Charles Crichton returned for a spectacular final act, one that stands as inspiration for us all. He'd gained his first fame the hard way, working his way up through the ranks as an editor at the Korda brothers' London Film studio. His directorial breakthrough came with the unexpected hit Hue and Cry (1947), an Ealing Studio feature, the first of what became the most famous cycle of comedies in British film. In 1951, he made The Lavender Hill Mob, earning Alec Guinness the first of his five Oscar nominations. The eventual call from Hollywood did not end well, though. Hired to direct 1963's Birdman of Alcatraz, Crichton differed with producer-star Burt Lancaster, losing the job and his feature film career. Retreating into British TV, he collected credits on such shows as Danger Man, The Avengers and Space 1999. In the 1980s he found work making corporate shorts for a company called Video Arts. Its founder, John Cleese, liked to chat about this idea he had for a movie which became A Fish Called Wanda (1988). The result was an Oscar nomination for Crichton and (in the words of a British Film Institute biographer) "Cleese's generosity in sharing the profits allowed Crichton to live out his final years in unprecedented comfort."

Friday, August 5, 1988
A FISH CALLED WANDA. Written by John Cleese. Music by John Du Prez. Directed by Charles Crichton. Running time: 108 minutes. 14 Years Limited Admission with the B.C. Classifier's warning: some very coarse language and suggestive scenes. TO KNOW HER IS to love her. Indeed, just about everyone in sight has a special thing for pert, all-American Wanda Gershwitz (Jamie Lee Curtis).
Georges Thomason (Tom Georgeson), one of London's master criminals, considers her his own personal popsy. Georges' loyal henchman, sensitive, stammering Ken Pile (Michael Palin) knows that she belongs to his boss, but pines for her just the same.
Hyperactive American weapons expert Otto West (Kevin KIine) is sure that he's special. Wanda introduces him to one and all as her brother but, in private, assures him that she is his alone.
Her man-handling talents notwithstanding, Wanda knows that diamonds are a girl's best friend, She's playing all sides to reap the biggest possible portion of a 13-million-pounds sterling jewel robbery.
Imaginative, energetic and adaptable, she can modify her plan, add a lover, and engineer an additional double-cross at a moment's notice. Right now, for example, she's using her considerable wiles on British barrister Archie Leach (John Cleese), her jailed Georges' able defence counsel.
Meanwhile, gentle Ken is plotting a murder, and agonizing over the fate of the world's wildlife. A Greenpeacer, he has an aquarium that contains A Fish Called Wanda.
To see it is to laugh. A happy marriage of two anarchic comic styles, veteran director Charles (The Lavender Hill Mob) Crichton's Fish is a gut-busting mid-Atlantic catch.
Crichton, working closely with screenwriter John Cleese, has created an original Anglo-American comedy. In part, it draws upon the brash, knockabout tradition of Hollywood's best animated cartoons.
Curtis's Wanda is an always-in-control Bugs Bunny. Think about it:  the Bunny's handling of situations is often feminine. Kline's crazy Otto cries out Wile E. Coyote.
The picture's other part offers a variation on the British common-room revue, a class-conscious comedy style popularized by the Oxbridge-educated Monty Python players. Palin's Ken is the put-upon working-class bloke, while Cleese's Leach is the stuffy, repressed middle-class professional.
Making it such a hoot is the way Cleese's screenplay allows each of the actors to create a full-blooded character with just enough subtle shades to avoid a total stereotype. The result is superior slapstick, offering a satisfying sense of humanity beneath the physical humour.
It's nice to be able to report that Curtis absolutely shines in a role that allows her to be intelligent, devious, passionate and attractive; or that Kline, so often cast in soulfully serious roles, cuts loose with the same manic comedy genius that informed his performance as the Pirate King in the late Wilfred Leach's wonderful, underrated film version of The Pirates of  Penzance. (1983)
It's terrific to be able to say that they contribute to a comedy that left me weak from laughing. A Fish Called Wanda is the summer's finest film frolic.

Afterword: I confess to preferring cats to dogs, so for me the film's comic highlight remains the High Church funeral rites given the three Yorkshire terriers that Ken inadvertently kills in his various attempts on an eyewitness's life. "People think that if you're directing comedy, you've got to be funny," Crichton is reported to have said on the set of A Fish Called Wanda. "On the contrary, you've got to be serious." And what could more serious than a British boys' choir chanting Miserere Dominus; miserere Dominus; Canis mortuus est, (Have mercy, O Lord; have mercy, O Lord; The dog is dead) by a grave as the body is laid to rest? I also find it interesting that Jamie Lee Curtis's three most memorable performances were filmed under the direction of men whose names begin with the letter C — John Carpenter (Halloween; 1978), James Cameron (True Lies; 1994), and Charles Crichton, who was nominated for an Academy Award in both the direction and screenplay categories. (The picture's Oscar win went to Kevin Kline as best actor for his turn in the Wile E. Coyote-like role.)