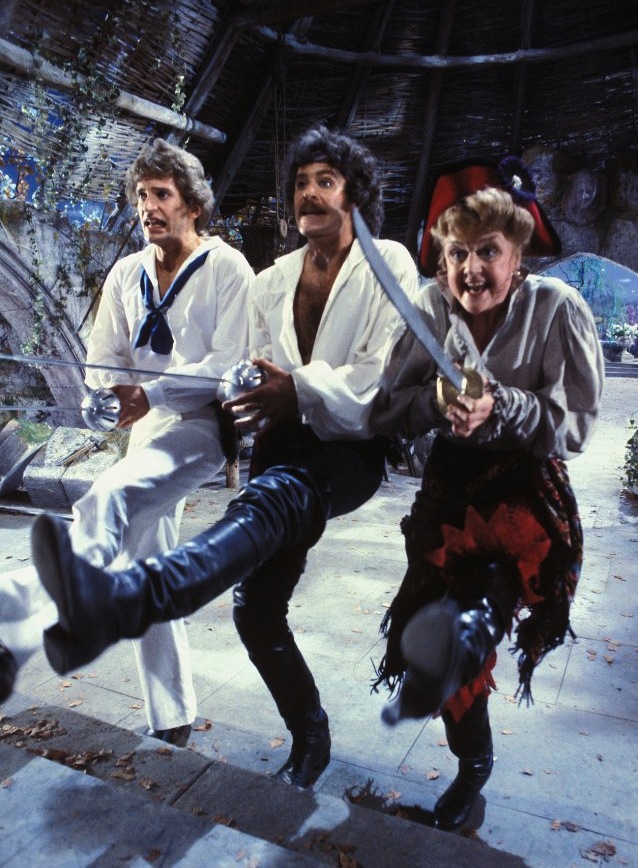 Frederic (Rex Smith, left), the Pirate King (Kevin Kline) and Ruth (Angela Lansbury, right) prepare to go forward on the foe in the 1983 adaptation of the comic opera The Pirates of Penzance.


The very model of a modern movie musical


In the the 1977 chase comedy Smokey and the Bandit, Sally Field plays a runaway bride who hitches a ride with truck-driving cowboy "Bandit" Bo Darville (Burt Reynolds). "Do you know who I think has really revolutionized the American musical theatre?" she says, in a desperate attempt to make small talk. "That's Stephen Sondheim." And she was so right. Even so, I believe that even Sondheim would agree that the first (and greatest) revolution in English-language musical theatre began on the day in 1875 that William Gilbert sat down with Arthur Sullivan to compose a one-act comic opera for London theatre impresario Richard D'Oyly Carte. Born on this day (May 13) in 1842, Sullivan was the music man. His partnership with librettist Gilbert horrified Britain's serious music critics, who had regarded the young Sullivan as the great hope for serious English music. During their 21-year collaboration, the pair would produce 14 major works, creating a popular culture legacy that endures to this day. The duo's fifth production was an inspired bit of nonsense called The Pirates of Penzance: or, The Slave of Duty. Premiered in New York in 1879, it received a Tony Award-winning Broadway revival in 1981, and an equally smart screen adaptation in 1983.

Thursday, February 24, 1983
THE PIRATES OF PENZANCE. Music by Sir Arthur Seymour Sullivan, with additional music by William Elliott. Choreography by Graciela Daniele. Written by Sir William Schwenck Gilbert. Adapted for the screen and directed by Wilford Leach. Running time: 112 minutes. General entertainment. THE ORIGINAL PRODUCTION was one for the record books. In order to secure a proper American copyright, Gilbert and Sullivan's English comic opera The Pirates of Penzance was simultaneously premiered in New York and Devon, England in December 1879.
The current film version is a history-maker as well. Friday [Feb. 18, 1983], for the first time, a movie was simultaneously released to theatres and shown on U.S. pay television.
A delightful adaptation of Joseph Papp's New York Shakespeare Festival stage production, this is no musical museum piece. Mounted with wit and grand style, it is every bit the model of a modern motion picture.
Adaptor-director Wilford Leach shows a keen appreciation of G&S and their satirical intentions. No stuffy Victorians, they used the musical theatre to make light of British society, to deflate its oh-so-proper pretensions and give the needle to Imperial institutions.
Leach's screen version, an ingenious artifice, recalls that some of the 20th century's greatest satirists were animated cartoonists. His Pirates has the same manic energy evident in such musical burlesques as Fantasia's "Dance of the Hours" and Bugs Bunny's Wagnerian adventure What's Opera, Doc?
His achievement is in making cartoon timing and visual conventions work for G&S. No hack job, this is the real thing, staged with respect and affection as well as panache.
That last point cannot be overemphasized. Last year [1982], The Pirates of Penzance was vandalized to produce a travesty called The Pirate Movie, an inept bit of cinematic trash.
Here, there is real talent at work. On view is an acting ensemble that won its spurs (and Tony awards) on the Broadway stage.
Rock stars Linda Ronstadt (as Mabel) and Rex Smith (as Frederic) demonstrate their ability to handle legitimate musical material, as well as sly romantic comedy.
Keven Kline (still on view locally in Sophie's Choice), is a wonderful Wile E. Coyote of a Pirate King, superbly self-confident and gently hapless. As Ruth, apprentice pirate Frederic's hard-of-hearing nurse, Angela Lansbury is absolutely in her element.
General-rated, this is the sort of special-event film that families should see together. I took three Sesame Street graduates (ages 5, 6 and 11) and they loved it.
For the true G&S fancier, a 32-page program booklet containing the libretto is included in the price of admission.

Afterword: Despite favourable reviews (such as the one above), director Leach's feature was a financial failure. The decision to release the film simultaneously to theatres and pay television caused American movie-house owners to boycott the picture, with the result that only 92 theatres in the U.S. bothered to book it. Another factor may have been the poor showing a year earlier of The Pirate Movie, an Australian-made "modernization" of the Gilbert and Sullivan tale. It managed to bomb without the excuse of a boycott, and probably poisoned the well for another version so soon after. Finally, the film opened on the U.S. President's Day weekend, one of eight pictures competing for filmgoers' attention. Lost to the 1980s audience, it was eventually released on videocassette, and now is available on DVD. Regardless of format, it remains a total delight.