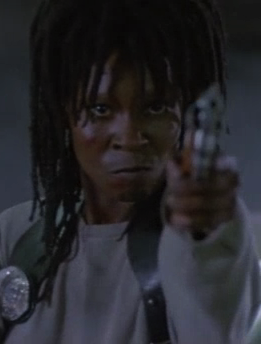 
Outspoken and ever aware of type-casting, Whoopi Goldberg worked hard to surprise filmgoers in her first years as a movie star. Born on this day (November 13) in 1955, she offered a parody of Clint Eastwood's Dirty Harry in director Tom Holland's action-comedy Fatal Beauty (1987).

Monday, November 9, 1987.
FATAL BEAUTY. Written by Hilary Henkin and Dean Riesner; based on a story by Bill Svanoe. Music by Harold Faltermeyer. Directed by Tom Holland. Running time: 103 minutes. Restricted entertainment with the B.C. Classifier's warning: frequent violence and very coarse language. LISTEN. DO YOU HEAR something like an echo as the tough cop confronts a murderous miscreant in an L.A. parking garage?
There are shots, of course. First, machine gunfire as the bad guy empties a clip.
Then, more shots as Detective Rita Rizzoli (Whoopi Goldberg) swings into action. She adopts the regulation two-handed stance, squeezing off several rounds from her regulation revolver, every shot smashing into the villain's chest with deadly accuracy.
Laughing insanely, he throws open his shirt with a Superman-like flourish. "KEVLAR, BITCH!"
Calmly, Rizzoli squeezes off one more, a brain-shattering bullet to the head. "Smith and Wesson, asshole.''
Did someone say "Dirty Harriet''? Despite Goldberg's presence in the supercop role, could Fatal Beauty have been intended for Clint Eastwood?
Stranger things have happened. We all know that 1984's Beverly Hills Cop was written for Sylvester Stallone. The part was rewritten for Eddie Murphy when the Italian Stallion couldn't fit the film into his schedule.
Fatal Beauty plays like an Eastwood vehicle. Like Harry, Rizzoli is a loner, a law-and-order obsessive with a mordant wit and no private life.
Despite official opposition, she's trying to build a case against politically influential land developer Conrad Kroll (Harris Yulin). The situation heats up when a couple of looney-tunes independents, Leo Nova (Brad Dourif) and Earl Skinner (Mike Jolly), make off with a shipment of the Kroll organization's cocaine.
Unbeknownst to the whackos, or their luckless customers, the coke — the "fatal beauty"of the title — is contaminated, a plot twist that allows director Tom (Fright Night) Holland to show how "recreational" drug use cuts across class, race and economic lines. An addicted inner city hooker dies in the same agony as a room full of partying suburban teenagers.
In the course of her investigations, Rizzoli forms a grudging buddy relationship with Kroll's essentially decent security chief, a good old boy named Mike Marshak (Sam Elliott). But for Rizzoli's hard-edged feminism, it could be Clint and Burt, the City Heat [1984] odd couple, all over again.
Coincidence? Hardly. Dean Riesner, who collaborated with Hilary Henkin on the Fatal Beauty screenplay, has among his other writing credits such Eastwood vehicles as 1968's Coogan's Bluff, Play Misty for Me (1971), and The Enforcer (1976), as well as the original Dirty Harry (1971).
Under Holland's workmanlike direction, their tough-talking anti-drug fable emerges as a standard urban action comedy, an over-the-top adventure suitable for fans of either Clint or the wilful Whoopi.

Afterword: I can find no evidence online that Manhattan-born Caryn Elaine Johnson ever read Benjamin Franklin's Letter to the Royal Academy prior to choosing her stage name. As an aspiring comedienne not shy about the fact that she passed gas, Whoopi Goldberg based her choice on the fact that "people used to say to me "you're like a whoopee cushion'." Channelling the spirit of that famous Franklin essay (alternatively titled Fart Proudly), she went by Whoopi Cushion until her mother suggested that a Jewish surname would get her further in Hollywood. The name was a challenge to audiences and entertainment business executives to take her as she was. Among the first to do so was Steven Spielberg, who offered her the starring role in his adaptation of Alice Walker's The Color Purple, the part of the much abused Celie Harris. It was her second feature-film appearance, and her best actress nomination was one of 11 Oscar nominations for the 1985 Spielberg drama. (Goldberg's Oscar win came in 1991, a supporting actress award for her work opposite Patrick Swayze and Demi Moore in Jerry Zucker's Ghost.) With some 70 feature film appearances since, she's a recognized movie star. She also made a lasting impression on science-fiction fans as Guinan, her recurring character on the TV series Star Trek: The Next Generation. She reprised that role in two of the spin-off features, 1994's Generations and Nemesis (2002). Currently, her opinions make headlines, as she is the moderator of the daily ABC-TV chat show The View, a program that features women discussing various  issues in the news. In December 2014, the famously flatulent Goldberg offered an example of breaking news that remains available as a YouTube video. Today (November 13) is Whoopi Goldberg's 60th birthday.