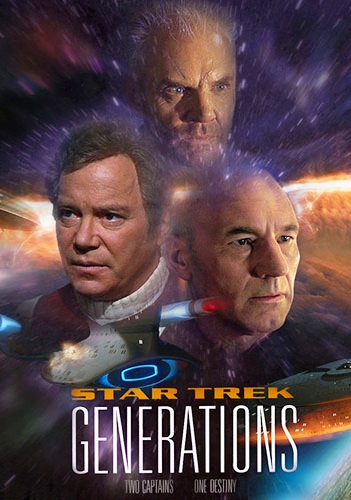 Though he appears in the film (as Will Riker), Jonathan Frakes is not among the top-billed stars — William Shatner, Malcolm McDowell and Patrick Stewart — pictured on the 1994 promotional poster for Star Trek: Generations.


Today (August 19), is the first day of Sasquan, the 73rd World Science Fiction Convention, this year being held in Spokane, Washington. According to a Facebook posting, the 2015 event "has reached 10,000 members!" . . . which means that it will be considerably less intimate than Nycon 1, the first Worldcon, held in New York in 1939. That gathering, organized by the then 19-year-old Sam Moskowitz, attracted a reported 200 fans, including the still teenaged Isaac Asimov and Ray Bradbury. By no coincidence at all, it occurred during the run of the 1939 New York World's Fair, the legendary Expo with "The World of Tomorrow" as its theme. The grandly named "World's Science Fiction Convention" was in fact a coming-out party for a literary genre incubated in pulp magazines and comic strips, and championed by teen-aged boys. In 1939, Hollywood considered sci-fi B-budget fare. The year's "big" releases were Son of Frankenstein, The Return of Dr. X and the 12-chapter Buck Rogers serial. How times have changed. Among those who have seen today become "Tomorrowland" is Sasquan author guest of honour David Gerrold, whose contributions to the genre include helping to shape the Star Trek universe. Celebrating a birthday as Worldcon opens is actor Jonathan Frakes. Born on this day (August 19) in 1952, Frakes was part of the pop culture transition featured in 1994's Star Trek: Generations.

Friday, November 18, 1994.
STAR TREK: GENERATIONS. Written by Ronald D. Moore, Brannon Braga and Rick Berman. Based on characters created by Gene Roddenberry for the television series Star Trek (1966-1969) and Star Trek: The Next Generation (1987-1994). Music by Dennis McCarthy. Directed by David Carson. Running time: 117 minutes. Mature entertainment with the B.C. Classifier's warning: occasional violence and suggestive language.  TV OR NOT TV?
That is not a question that occurred to David Carson when he settled into the director's chair for Star Trek: Generations. Charged with launching a new series of big-screen Trek adventures, the British-born television director had his hands full with its tale of two captains.
Trekkers, arguably the most involved fans in the pop culture universe, were waiting. A matter of closure and renewal, the meeting between Bill Shatner's Jim Kirk and Patrick Stewart's Jean-Luc Picard was an eagerly anticipated cinematic event.
Carson, whose telefilm credits include the 1993 Star Trek: Deep Space Nine pilot and episodes of the Jeremy Brett Sherlock Holmes series, had to deal with a pair of feisty old Shakespeareans while making a smooth shift from the dramatic style and concerns of the so-called "classic" Star Trek to those of the more recent Next Generation crew.
Carson would have been aware that the fate of the Paramount Communications conglomerate's most lucrative franchise hung in the balance. With all that to think about, he had little time to make the personal transition from telefilm to theatrical motion-picture thinking.
Budget and ambition notwithstanding, then, Generations looks like a made-for-television movie. Those filming techniques — constant close-ups and tight framing of characters within a scene — that make for intimacy on the small screen can induce claustrophobia and call attention to details of the actors' makeup.
Aside from that, Carson accomplishes his mission. Working from a screenplay by veteran television Trek writers Ron Moore and Brannon Braga, he uses the personalities of his Starfleet captains to identify the essence of their two very different shows.
To do this, he introduces a classic Trek threat. Generations opens with a retired but still heroic Kirk giving his life to save a newly commissioned Enterprise (NCC-1701-B) from destruction within a cosmic energy ribbon (later identified as a "temporal nexus").
Seventy-eight years later, a mad scientist named Soran (Malcolm McDowell) is saved by Picard's Enterprise (NCC-1701-D). It seems that the earlier mission "saved" Soran from the "nexus" against his will.
The all-knowing Guinan (Whoopi Goldberg) explains to Picard that the "nexus" is basically heaven. Within it, you enjoy your favourite fantasy for eternity. Soran will do anything to return there.
When Picard enters it, he'll find Kirk. The two men's ideas of heaven tell us a lot about them and the two Treks.
Picard's deepest longings put him at the centre of a Dickensian English Christmas celebration, with a homebody wife (Kim Braden) and several worshipful children. Kirk's eternal bliss is a wilderness cabin with a wild woman (Lynn Salvatori) waiting in the bedroom.
Generations, then, is the segue from the 1960s Star Trek (an era of self-centred self-fulfilment in which an individual's big thrill is "making a difference") to The Next Generation's age of teamwork and family values. Responsible and sensitive, Picard is allowed to cry, while Kirk can only quip.
In this match-up, A-list actor McDowell is no more than a stock villain. He's Marvin the Martian, destroying stars with his Acme-built Illudium Q-32 Space Modulator.
In the villain's corner are the wonderfully vile Duras sisters, Lursa and B'Etor (played by Canadian actresses Barbara March and Gwynyth Walsh). Their Klingon Bird of Prey gets into a firefight with the NextGen's Enterprise, which contains most of the cast of that show.
And so the torch is passed in a film that allows Kirk a dignified exit, and in which the android Data (Brent Spiner) laughs. Depending upon your Trek preference, either moment could be the picture's highlight.

Afterword: According to his "official" Star Trek biography, Starfleet Commander William Thomas Riker will be born on this day (August 19) in 2335 in Valdez, Alaska. Coincidentally, actor Jonathan Frakes, who played the Riker role in 176 episodes of Star Trek: The Next Generation and in four Trek feature films, celebrates his own 63rd birthday today. He made the transition to directing in 1990, taking the helm for a third-season NextGen episode called The Offspring. After honing his skills behind the camera with seven more episodes of NextGen, and three each of Deep Space Nine and Voyager, he made his feature directing debut with 1996's Star Trek: First Contact, followed by Star Trek: Insurrection (1998). After the box-office failure of his 2004 feature Thunderbirds (a live-action adaptation of the British animated TV series from the 1960s), he's concentrated on television, directing episodes of such series as Dollhouse (2009), V (2010), Leverage (2009-2012) and Agents of S.H.I.E.L.D. (2013). My favourite to date is his fifth season Castle episode, The Final Frontier (November 5, 2012). That's the one set at a science fiction-convention, a marvellously meta episode full of fan-friendly moments. Director Frakes even makes a cameo appearance, showing up in a scene where mystery writer Richard Castle (Nathan Fillion) is signing copies of his new book. "I'm your number one fan," the actor who played second officer on the Starship Enterprise says to the actor who captained the Firefly-class Serenity.