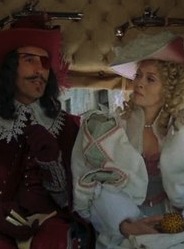 The villainy of the Count de Rochefort (Christopher Lee) and Milady de Winter (Faye Dunaway) is the central focus of The Four Musketeers.


Celebrating his 82nd birthday today (Jan. 19) is Philadelphia-born director Richard Lester, the American who helped shape London's "swinging" image in feature films such as It's Trad, Dad! (1965) and The Knack . . . and How to Get It (1965). His film career really took off, though, with a pair of innovative rock musicals: A Hard Day's Night (1964) and Help! (1965), the pictures author Joe Yule was referring to when he called his 1994 Lester biography The Man Who "Framed" The Beatles. A generation later, MTV bestowed its first Lifetime Achievement Award on Lester for "essentially inventing the music video," a 1984 honour that he shared with the quartet. Demonstrating his own eclectic musical taste, he immediately went on to direct a big screen adaptation of Stephen Sondheim's Broadway hit A Funny Thing Happened on the Way to the Forum (1966). An international artist who often worked with producers on the edges of the Hollywood industry, Lester made movies his own way, occasionally turning out a classic (1976's Robin and Marian), occasionally a bomb (1984's Finders Keepers). Having recalled the fun of his version of The Three Musketeers, Reeling Back looks at its sequel, The Four Musketeers (1974).

Monday, March 24, 1975
THE FOUR MUSKETEERS (MILADY'S REVENGE). Written by George MacDonald Fraser, based on the novel by Alexandre Dumas (pere). Music by Lalo Schifrin. Directed by Richard Lester. General entertainment. ALL, RIGHT, ALL RIGHT. Let's calm down. Remember, there's more to life than love and laughter, high spirits and swordplay.
Last year's The Three Musketeers was a lot of fun for everybody. But now it's 1975, and this is shaping up to be the year of the sombre sequel.
Francis Ford Coppola issued the first warnings at Christmas time. His Godfather, Part II, turned the story of the criminally successful Corleone Family into an authentic American tragedy. Now Richard Lester is back with The Four Musketeers. After last year's joyous, unqualified triumph, the new movie is a sudden letdown and an unexpected disappointment.
It was almost inevitable. Last March, I awaited the arrival of the first movie with considerable skepticism. For one thing, the casting was a bit bizarre.
For another, director Richard Lester had been in eclipse for a number of years. He had made his reputation in the 1960s with a pair of innovative comedies built around the Beatles (A Hard Day's Night; Help), misfired badly thereafter (The Bed Sitting Room; How I Won the War), and fell from sight.
Finally, nobody, good, bad or indifferent, had made a movie swashbuckler for at least a generation. Did Lester have the knack? Going in, my expectations were zero.
The Three Musketeers was terrific, a perfectly tuned luxury limousine hitting on all cylinders. Six months later, he was back with Juggernaut, another entertainment bonanza. Lester was back with two of 1974's best movies to his credit.
His Three Musketeers had a subtitle — The Queen's Diamonds —  and a surprise. At the end of the film, Lester revealed that a sequel was already on the way.
(It was a surprise to the cast as well. Signed to do one film, they discovered that, at the last minute, the producers had decided to make two. The full story of the ensuing legal settlements has yet to be told.)
Going into The Four Musketeers — subtitled Milady's Revenge — expectations are considerably higher. Turned on to rollicking high adventure, audiences want more of the same.
It's not the same. The playing out of Alexandre Dumas' original story wouldn't permit it. Thwarted in the first film, the beautiful but deadly Milady de Winter (Faye Dunaway) must have her revenge.
In the first film, no principal character came to harm. Now, though, Milady demands deaths. "The death of Buckingham for the death of D'Artagnan," she tells Cardinal Richelieu (Charlton Heston), striking a bargain. Now the villains must have their innings, accounts must be settled and the epic brought to its conclusion.
With The Four Musketeers, the change of mood is brought about by a shift in focus. The first film set D'Artagnan (Michael York), the awkwardly romantic, would-be musketeer at centre stage. His infatuation with royal dressmaker Constance Bonancieux (Raquel Welch) brings him into the Queen's service.
Together with musketeers Porthos (Frank Finlay), Athos (Oliver Reed) and Aramis (Richard Chamberlain), he foils sinister Richelieu's plot to discredit Queen Anne (Geraldine Chaplin). The Cardinal's agents, Milady de Winter and Rochefort (Christopher Lee) are thwarted, the Queen's affair with Buckingham (Simon Ward) remains unproven, and D'Artagnan becomes a musketeer.
In The Four Musketeers, the romantics, D'Artagnan and Constance, recede and the cynics, Athos and Milady, come forward. These are people with pasts, brooding over grievances and plotting vengeance. Blood will be spilt.
Problems caused by the shift in mood are complicated by the fact that the two films do not link smoothly. One character, Spike Milligan's Bonancieux, has disappeared without a trace (the result, perhaps, of unsettled litigation?) and the movie that remains seems to be missing whole chunks of plot.
A voice-over narration, in which Aramis recounts the story of The Three Musketeers, gets things off to a clubfooted start. Then, for no apparent reason, the Musketeers are seen rescuing Rochefort from a firing squad.
Somewhere between films everyone's gotten involved in a war against Protestant rebels, holed up in the walled city of La Rochelle. All the characters we met in the first film (except Bonancieux) use the new surroundings to work out the old antagonisms.
Despite its larger canvas, the new film seems to be less rich in incidental detail, less coherent in overall narrative and less careful about building logical foundations for its comic moments. Generally, the package seems to have been assembled with less affection.
There's no faulting the actors. As an ensemble, they are every bit as effective as they were in the first part, although we see less of Welch and more of Dunaway, less of Lee and more Heston, less of York and more of Reed.
There's little wrong with Lester's basic concepts, either. George MacDonald Fraser's dialogue remains bright and witty. In sum, though, the effect is slapdash, an afterthought that could have used a little more thinking.
Last year, Richard Lester made a great movie. This year, The Four Musketeers is merely good. Even so, for action-adventure fans, it is a film that's not to be missed.

Afterword: Fifteen years later, Lester would return to his original epic's Spanish locations to make The Return of the Musketeers (1989), an adaptation of Alexandre Dumas' Three Musketeers sequel, the 1845 novel Twenty Years After. The principal cast, including Michael York, Oliver Reed, Richard Chamberlain, Frank Finlay, Christopher Lee (having recovered from his apparent death in The Four Musketeers) and Geraldine Chaplin, was reassembled and George MacDonald Fraser returned to do the screenplay. Tragedy struck during the filming when Lester's friend of many years, actor Roy Kinnear, died of a heart attack after falling from his horse. Though released theatrically overseas, the picture never found a North American distributor, ending up as a cable-TV film. Afterwards, Lester quit directing, only coming out of a self-imposed retirement once. At the request of another long-time friend, Paul McCartney, he helmed the former Beatle's 1991 concert film Get Back.