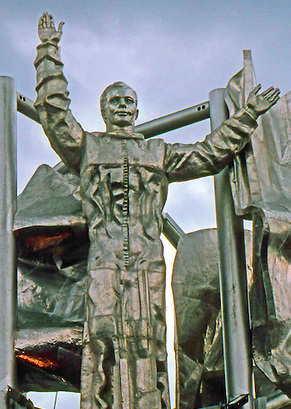 An eight-metre aluminum sculpture of cosmonaut Yuri Gagarin, the first man to orbit the earth, welcomed Expo 86 visitors to the pavilion of the Union of Soviet Socialist Republics.


The 30th item in Reeling Back's 38-part series recalling the cinema of Vancouver's Expo 86 reviews the 20-minute, 70mm A World in Motion and two of the 3-D movies that were screened daily at the pavilion of the Union of Soviet Socialist Republics.

RUSSIANS, ACCORDING TO THE stereotype, are a simple, unsophisticated folk. Big and bearlike, they can be morose, stolid and implacable, but at heart they are open, sentimental slobs, earthy and outgoing like John Candy playing Giorgy in SCTV’s parody of CCCP-One TV.
It's a cliché. We all know it's a cliché. The trouble is the stolid, sappy films on display in the U.S.S.R. pavilion's 180-seat 70mm movie theatre seem to bear it out.
Take, for example, A World in Motion, the 20-minute greeting shown six times daily. A multi-screen exercise in the manner, if not the mood, of the Expo 67 hit A Place to Stand, the film pulls out all the stops to show us Soviets “making friends wherever we go.”
“Red Square,” an American-accented narrator tells us, “is the heart of Moscow, and this is where our journey begins . . . Like a mirror, it reflects the nation, purposeful and moving apace.”
Faithful to Expo’s transport theme, the film treats us to images of cars, trains, ships and planes. Each section introduces a citizen — a tram driver in Kiev, the captain of an icebreaker, a cosmonaut, a telephone operator — all of whom deliver sincere, if stilted, paeans to public service and world peace.
There’s no arguing with the sentiments. I only wish they could have been presented in a picture that looked less like a deliberate parody.
By contrast, the once-daily demonstration of Russian 3-D movies is merely inept. The 23-minute presentation that I saw consisted of two shorts, both of them obviously meant for Soviet domestic consumption.
The first was made up of footage that might well have been rejected by television’s Wild Kingdom: 14 minutes of bear cubs, fox kits and the like gambolling about a nature park, with narration in unsubtitled Russian. The second, a puppet cartoon, told the wordless story of a lonely colt who leaves the farm in search of friendship.
Neither picture displayed any real interest in the possibilities of filmmaking with a depth dimension. Both were flatly directed and technically uninteresting.

Afterword: In early July of 1986, Canada’s Southam News service moved a story by Duart Farquharson to its member papers. “In the superpower competition for world prestige through Expo 86, the Soviet Union has won hands down,” it said. “The giant Soviet pavilion, with up to 35,000 visitors a day, is the top draw at the world’s fair.” The 3,000-square-metre pavilion’s success was not due to the pedestrian films on view, but to the fact that it gave people an opportunity to touch history. As Farquharson noted, “the Soyuz-Salut-Progress, a 33-metre orbiting space station parked outside the back of the pavilion is actual space hardware. You line up to climb up, go inside and be a part of it.” What we didn’t know at the time was that the 1986 celebration of Soviet achievements was something of a last hurrah, and that the ineptitude of its film shows was closer to the truth. By the time of Expo 92 (discussed in my Reeling Back report on the Expo 86 Italian and Spanish pavilions), the U.S.S.R. was no more.
History records that the Soviet Union was dissolved on December 21, 1991, just nine days short of the 69th anniversary of its formal establishment (December 30, 1922). At its height, the union consisted of 15 Soviet Socialist Republics: Russia, Ukraine, Byelorussia, Uzbekistan, Kazakhstan, Georgia, Azerbaijan, Lithuania, Moldavia, Latvia, Kirghizstan, Tajikistan, Armenia, Turkmenistan and Estonia. Born in the 1917 revolution that brought down the Russian royal family, the new nation was seen as a danger to the established Western powers — a “Red menace” — and the adversarial relationship persisted during its entire existence. (Canada had its own bout of anti-Soviet paranoia, a moment chronicled in 2010's Seeing Reds: The Red Scare of 1918-1919, Canada's First War on Terror, a book by Vancouver historian Daniel Francis.) A world power, the Soviet Union managed to be a major presence at most of the 20th century's great world's fairs, beginning with Paris’s “art deco” exposition in 1925, and ending with Expo 88 in Brisbane, Australia.

See also: The eight articles included in this, the third of four Expo 86 special reports, explore the pavilions of: