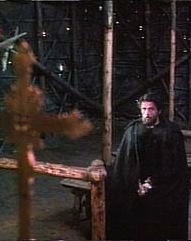 
Born on this day (August 16) in 1940, Bruce Beresford is one of the best of a great generation of Australian directors. In his 1991 feature Black Robe he focused on Canadian history.

Thursday, October 10, 1991.
BLACK ROBE. Written by Brian Moore, based on his 1985 novel. Music by Georges Delerue. Directed by Bruce Beresford. Running time: 100 minutes. Rated 14 Years Limited Admission with the B.C. Classifier's warning "some violence, nudity and suggestive scenes. IT COULD HAVE been worse.
Black Robe, Brian Moore's glum historic novel about a French Jesuit missionary in 17th century Quebec, might have attracted the attention of some hare-brained Hollywood "genius" — a Warren Beatty or a Ridley Scott.
As it happens, the man who was "so taken with it that I found out where Moore lived, called him up and told him I wanted to make a film of it," was Bruce Beresford, the usually competent, occasionally brilliant Australian-born director of such pictures as Tender Mercies (1983), Crimes of the Heart (1986) and last year's Oscar winner, Driving Miss Daisy (1989).
It could have been a lot better, too.
As a film, it could have been a companion piece to The Mission (1986), Roland Joffe's committed, morally complex drama examining the fall of a Utopian "Jesuit republic" in 18th century South America.
A product of Mediterranean Europe's counter-Reformation, Roman Catholicism's Society of Jesus has long been regarded with fear and loathing by historians loyal to the Protestant empires of England and its allies.
To his credit, Joffe attempted to re-examine the record, ambitiously going beyond the racialist propaganda to tell the story of some mystically-motivated social and spiritual revolutionaries. That story has a Canadian dimension.
In 1634, Jesuits arrived in the French trading settlement of Quebec. Though their legacy has been obscured by pious Catholic hagiography (to say nothing of Protestant historical myopia), it includes the Jesuitical realpolitik that challenged kings (and, reborn as Liberation Theology, troubles secular authorities in the third world to this day).
Unfortunately, that's not the story that Belfast-born Los Angeles resident Moore tells. A lapsed Catholic of the Irish variety, he imposes the usual 20th-century crisis-of-faith plot on his material.
Lacking any original vision, Moore's adapted screenplay is no more than a gloomy Dances with Beavers. But for some brief sex scenes, it looks like a made-for-TV frontier adventure.
Filmed in Quebec, it features Lothaire (Jesus of Montreal) Bluteau in a part that might have been written for Richard Chamberlain. As the intensely dedicated Fr. Laforgue, he undertakes a journey to Ihonatiria, the Jesuit mission in Huronia.
Montreal-born August Schellenberg has the Anthony Quinn role. He plays Chomina, the Algonquin chief who promises French governor Samuel de Champlain (Jean Brousseau) that he will bring Laforgue safely to his destination.
Toronto's Aden Young makes his big screen debut in the Doug McClure role. He plays Daniel, a young, linguistically talented French settler who accompanies Laforgue more out of interest in Chomina's daughter, Annuka (Sandrine Holt), than religious zeal.
For Beresford, Black Robe is King David revisited. That 1985 Biblical bomb showed us a director out of his century, out of his mindset and out of his depth.
Basically a 19th-century Anglo, Beresford has an effective mechanistic understanding of truth, justice and American cinematic ways.
Those ways work a treat when he's dealing with British military adventurism (Breaker Morant; 1980), Australian private girls' schools (The Getting of Wisdom; 1978) or sentimentalized American class struggles (Driving Miss Daisy).
Too bad he has nothing to bring to Moore's cliched, noble savage tale. Despite outstanding work from actors Bluteau and Schellenberg, it is a universe with no place for abiding faith or powerful, charismatic personalities.
Moore's tedious dramatic insistence that all Jesuits are either fools, fakes or fanatics is yet another variation on the great Canadian loser theme. Despite painstaking work on costumes and sets, Beresford achieves no sense whatever of a real time or place.
What's left is cynicism and leaden despair. A numbingly dull example of Canadian cinematic can't-do, Black Robe is this season's Bethune.

Afterword: The fact that his debut feature, 1972's The Adventures of Barry McKenzie, was based on a comic strip showed that Bruce Beresford was a man of discernment. (During its decade-long run —1964-1974 — in the British satirical magazine Private Eye, the strip's hero came close to displacing Rupert Murdoch as the most famous Aussie expat in print.)  Beresford's 1976 feature, Don's Party, demonstrated a keen appreciation of the nexus between sex and politics. When he followed that film with The Getting of Wisdom (1978), the first of what became a trilogy of feminist coming-of-age features, I knew that the Sydney-born filmmaker was a man to watch. During the 1970s, he was a major force in the emerging Australian film industry. When he moved to Hollywood in the early 1980s, his first U.S. feature, 1983's Tender Mercies, won two Oscars (for best actor Robert Duvall and best screenwriter Horton Foote) and a directorial nomination for Beresford himself. Films such as Crimes of the Heart (1986) and Best Picture Oscar-winner Driving Miss Daisy (1989) showed his solid understanding of the American South. When it came to the great white north, though, I believe that his empathy failed him. My disappointment notwithstanding, members of the Academy of Canadian Cinema honoured Black Robe with a Genie Award for best picture. To this day, Beresford remains an interesting artist, one who is continually open to new things. Dividing his time between Australia and the U.S., he recently tried his hand at stage direction (Opera Australia's 2012 production of Erich Wolfgang Korngold's Die tote Stadt) and an A&E TV mini-series (Bonnie and Clyde; 2013). In 1999, he ventured back into Canada briefly, setting up shots in B.C. for his suspense thriller Double Jeopardy.