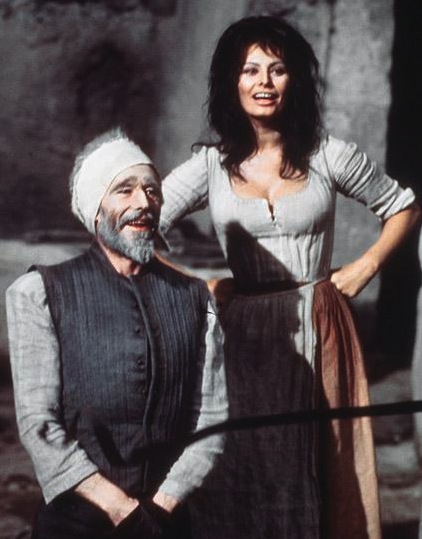 Scorned and covered with scars, Don Quixote (Peter O'Toole) still feels a song coming on in the company of his Dulcinea (Sophia Loren), in director Arthur Hiller's Man of La Mancha.


A song of praise to real, robust beauty


In his 1976 memoir The Actor's Life, Charlton Heston recalled the making of the historical epic El Cid. "I wish we could have persuaded Sophia to accept an aging makeup in the second half of the film . . . It did look odd for me to appear in the second half as the greying, scarred veteran of the Cid's weary campaigns, while Sophia was still unchanged as the beautiful Chimene." If only Heston could have lived to see 2009's Nine, Sophia Loren's 85th feature film in a career that began in 1950. He would have been amazed to see how incredibly kind the years have been to his then-27-year-old co-star, how little the Roman beauty has changed. Thursday, she was in Mexico City for a tour of "Yesterday, Today and Tomorrow," an exhibition at the Soumaya Museum celebrating her life. Among the items on display is her 1962 best actress Oscar for Two Women, the first to be awarded for a performance in a foreign-language feature. Today (September 20), Loren celebrates her 80th birthday at a gala dinner organized in her honour by billionaire Carlos Slim, the world's richest man. Coming on December 2 is Yesterday, Today and Tomorrow – My Life, her own 352-page memoir in which she just may tell us why she refused aging makeup during the filming of El Cid. She may also share a memory or two about co-starring with Peter O'Toole in the 1972 movie adaptation of Man of La Mancha.

Thursday, December 14, 1972.
MAN OF LA MANCHA. Written by Dale Wasserman, based on his 1965 stage musical. Inspired by the Miguel de Cervantes novel, Don Quixote (1605). Lyrics by Joe Darion. Music by Mitch Leigh and Laurence Rosenthal. Produced and directed by Arthur Hiller. Running time: 132 minutes. General entertainment. "I WILL IMPERSONATE A man," proclaims a gaunt, imperious-sounding Peter O'Toole. "His name — Alonzo Quijana, a country gentleman, no longer young. Being retired, he has much time for books.
"He studies them from morn till night, and often through the night till morn again. What he reads oppresses him, fills him with indignation at man's murderous ways toward man.
"He ponders the problem: how to make better a world where evil brings profit, and virtue none at all. He lays down the melancholy burden of sanity and conceives the strangest project ever imagined — to become a knight errant, and sally forth to roam the world in search of adventure.
"To right all wrongs; to mount a crusade; to raise up the weak and those in need. No longer to be plain Alonzo Quijana, but a dauntless knight known as Don Quixote de la Mancha!"
And so, with ringing declarations and the stirring rumble of guitars, begins Arthur Hiller's screen adaptation of Man of La Mancha, a translation that is consistently grand without ever being great. Despite the gallons of glycerine glinting from his actors' eyes, his film is curiously unmoving.
The story opens in the marketplace of a Spanish town, circa 1600. A troupe of actors under the direction of poet Miguel de Cervantes (O'Toole), is playing out a parody of justice under the Holy Inquisition. The Inquisitors are not amused. Cervantes is invited to Seville to discuss the matter.
Together with his stage manager (James Coco) and a copy of his manuscript, Cervantes is marched off to the prison to end all prisons, a hilltop keep sealed off from the world by massive double gates, a portcullis and bar. Within the main blockhouse, he descends a seemingly endless spiral stairway, and is admitted to the ultimate dungeon, a torch-lit crater accessible only by a gangway lowered from above.
A newcomer to the society of the damned, Cervantes must account for himself. In a mock trial before his fellow prisoners, he acts out the story of Don Quixote, the magnificent madman who convinces a poor neighbour named Sancho Panza (Coco again) to become his squire.
He convinces himself that a lusty tavern wench named Aldonza (Sophia Loren) is really the Lady Dulcinea, the courtly ideal of his  knight's quest.
The material is classic. Inspired by Cervantes's novel — a contemporary of Shakespeare, Cervantes published his work in two parts, 1605 and 1615 — Dale Wasserman (together with composer Mitch Leigh and lyricist Joe Darion) created Broadway's original Man of La Mancha. A tuneful adaptation, it ran for 2,328 performances, the fourth longest running musical to play the Great White Way [as of 1972].
Arthur Hiller, with an $11-million budget and Italian locations, has turned out a suitably impressive film version, although he adopts a style that allows little feeling or warmth to intrude on the spectacle.
His cool approach has paid off in the handling of comedy, mainly because he was working with wordsmiths such as Neil Simon (1970's The Out-of-Towners; 1971's Plaza Suite) and Paddy Chayefsky (The Hospital; 1971), whose highly polished scripts need distance to shine properly.
Edmonton-born and CBC-trained, Hiller was the man who directed the fabulously successful Love Story (1970). There, too, it was the writer — Erich Segal — whose name everyone remembers. Despite its painfully trite script and lush Francis Lai score, the film benefited from the antiseptic Hiller look.
For Hiller, Man of La Mancha represents a plateau of sorts. It's his first major film in years that doesn't emphasize the name of the writer over that of the director. It does, however, put a lot of emphasis on its stars.
O'Toole is at the centre of the action as Cervantes/Quixote and, like Hiller, he seems to view his character(s) from a distance. No stranger to the role of madman (The Ruling Class, his most recent crackers characterization, is still in town), O'Toole seems to lack the capacity for gentle dementia.
Quixote, with his chivalric ideals and romantic faith, is supposed to be the product of a fine sensibility that has tuned itself even finer. O'Toole plays the role with more arrogance than idealism.
His co-stars, by contrast, are typed to a T. As written, the roles of Sancho and Aldonza are one-dimensional, but within that dimension James Coco and Sophia Loren are robust and real.
Both recognize realities that Quixote can not see. Coco, mouthing Sancho's meaningless homilies — "dying is such a waste of good health" — has exactly the right mix of good-natured resignation and self-aware common sense.
Loren, described at one point as "a tigress crouching in the dark, still keen in tooth and claw," was another perfect choice. Few actresses can smoulder quite as well as she, and she keeps her own fire aglow as the part-time whore who is both confused and complimented by the madman's chaste affection.
A musical drama, Man of La Mancha is a film in which none of its stars is a singer.  Despite that, the musical numbers — among them the reprise of The Impossible Dream — still manage to work.
Hiller has gone to great lengths to create realistic settings for the dramatics. Adding to that realism are singing voices that just might belong to a tavern wench, a dreamy peasant — Loren and Coco do their own singing; O'Toole is dubbed by Simon Gilbert — and a crazy old man.

Afterword: Given the Anglo-American dominance of today's popular culture, I find it interesting that the first modern European novel was written in Spanish by a Castilian soldier and poet, Miguel de Cervantes, a man whose own tumultuous life has yet to inspire a movie biography. Interesting, too, that his epic novel is based on "indignation at man's murderous ways toward man," and the question of "how to make better a world where evil brings profit, and virtue none at all." The expression "torn from today's headlines" comes to mind. There is considerable evidence in those headlines that more and more of our fellow citizens would agree that sanity is a "melancholy burden," one that many ease with mood-altering drugs, or so-called "reality television." On the plus side, we have the career of Arthur Hiller, who celebrates his 91st birthday on November 22. His 33 feature films, among them the ever watchable The Americanization of Emily (1964), the problematic W.C Fields and Me (1976) and the hilarious Outrageous Fortune (1987), offer a more positive tonic for our bruised spirits.