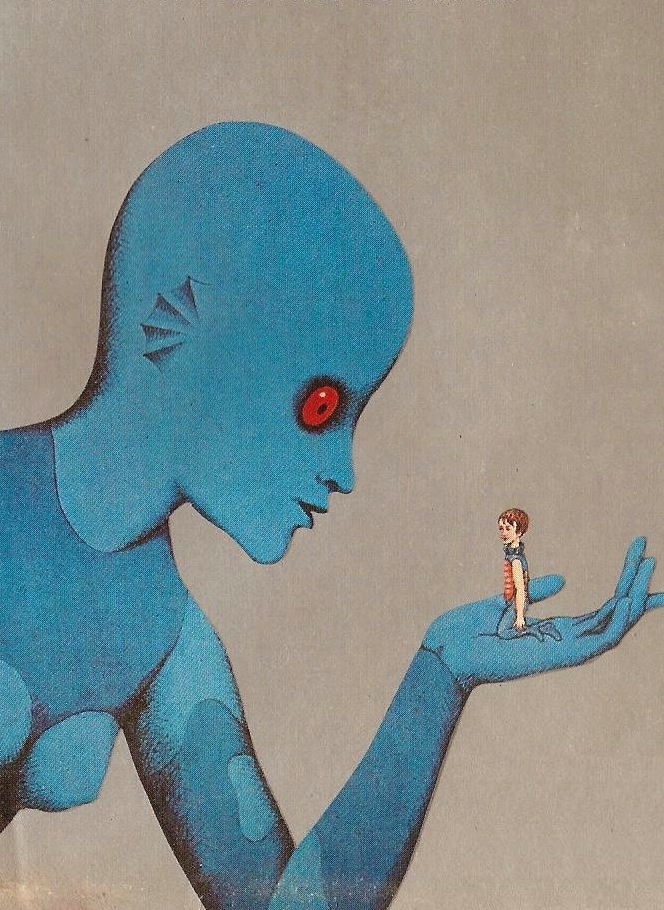 In a galaxy far away


Surreal style for a sidereal story


Before the computer made a new age of animation possible, there was a mid-1970s burst of adult cartooning. A worldwide movement, it included the brilliant outrages of Ralph Bakshi, and a thoughtful, Franco-Czech science-fiction feature, director Rene Laloux's The Fantastic Planet.

Friday, July 19, 1974.
THE FANTASTIC PLANET  (La planete sauvage). Co-written and designed by Roland Topor. Based on the novel Oms en série (1957) by Stefan Wul. Music by Alain Goraguer. Co-written and directed by Rene Laloux. Running time: 72 minutes. General entertainment. OF ALL THE MOVIE TRENDS to emerge in recent years, perhaps the most pleasant is the renewed interest filmmakers are showing in the animated feature. Despite the lingering impression among many filmgoers that cartoons are "kids' stuff," the art is aggressively reasserting itself.
The major breakthrough was, of course, Ralph Bakshi's memorable Fritz the Cat (1972), the opening night attraction at last year's Varsity Festival. Fritz, the first cartoon feature ever assigned a Restricted rating, was based on characters created by underground comic artist Robert Crumb.
Following his Varsity premiere, Fritz played on Granville Street's Theatre Row. Later,  Bakshi's second feature, the strikingly original Heavy Traffic, came to town, an adult cartoon in marked contrast to the long-in-production Disney Christmas feature, a tired and tiring talking-animal version of Robin Hood.
Bakshi proved that cartoons didn't have to be either cute or funny, that they could contain the same range of human experience as live action films, and that they could play to adult audiences.
In a very real way he opened the door to films like La planete sauvage (being shown here in its English language version as The Fantastic Planet). A science-fiction adventure, it offers a fascinating future vision that is as arresting visually as it is  dramatically.
The story, co-written by director Rene Laloux and animator Roland Topor, is from a novel by Stefan Wul. It's set on a planet called Ygam some centuries after man has finally managed to kill off the Earth.
Here mankind is not the dominant species. Humans are  "Oms," like two-legged dogs that either run in wild packs, or are domesticated to give pleasure to the children of the Draags, the giant, blue-skinned creatures that are native to Ygam.
The film opens with an Om mother clutching her infant while attempting to escape a gang of Draag boys. They are playing with her with the same mindless sadism that human children often show when playing with tiny animals.
The mother is killed, just as an adult Draag and his daughter come on the scene. The girl, called Tiwa, asks to keep the Om child. "And that, says the voice of a narrator, "was the first time I saw the Draag prime minister. He saved my life and linked his fate to mine."
Tiwa (Cynthia Adler in the English-language version) names her pet Terr, because he is "a terror." For most of the film his adult voice (Barry Bostwick) supplies periodic bits of narration.
Filmed in the Prague studios of Czech animator Jiri Trnka, The Fantastic Planet resembles neither the cuddly creations of a Disney, nor the cheerful grotesques of a Bakshi. Topor's graphic style has more in common with contemporary magazine illustration than that of the more familiar American animators.
The result is a series of fascinating landscapes, revealed as Terr's story progresses. By comparison to the immense Draags, Oms age rapidly. A week of Draag life is equal to an Om year.
As Terr grows, he learns about the Draags, absorbing their knowledge by being attentive to Tiwa's telepathic teaching machine, a crownlike band that she wears during "Info" sessions. "When I could no longer benefit from her lessons," he says, "I decided to run away."
He does so, dragging the device along with him, hoping to bring learning to the packs of wild Oms. With such technical knowhow,  the Oms will be able to escape Ygam, and journey to the mysterious and lengendary Fantastic Planet.
His adventures open new worlds to the moviegoer, worlds with places for disembodied meditation, full of strange predatory creatures, savage individual combats and delicate, almost fairy-like fertility rites. As a trip, it more than out-Alices Lewis Carroll's Alice.
A quest story, powered by an active and alien imagination, The Fantastic Planet is as different from conventional cartoons as cats (such as Fritz) are from mice (like Mickey). It bodes well for the future of the animator's art.

Afterword: Paris-based animator Rene Laloux (1929-2004) came to the arts from a background in clinical psychiatry. Initially he saw cartooning as a therapeutic tool, and he began working with surrealist illustrator (and Alejandro Jodorowsky associate) Roland Topor in the early 1960s. Together they made two animated short films, then adapted French science-fiction writer Stefan Wul's metaphorical novel Oms en serie into a feature film. A critical and financial success in Europe, La planete sauvage was followed in 1982 by Les maitres du temps, a story of shipwrecked spacemen and the mission to rescue them. Laloux's collaborator on the new picture was comic-book legend Moebius (aka Jean Giraud), who'd previously adapted the original Stefan Wul story as a graphic novel. Sadly, their feature never made it to North American theatres. Laloux's final work, 1988's Gandahar, did turn up locally titled Light Years. Recut and dubbed into English, it was shorter and much changed, to reflect its U.S. distributor's idea of what audiences expected from animated features.