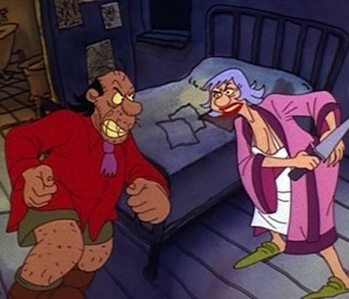 Cartoons for adults only

Sunday, February 2, 1974.
HEAVY TRAFFIC. Animated feature with brief live action sequences. Includes scenes from Red Dust (1932) featuring Clark Gable and Jean Harlow. Original music by Ed Bogas and Ray Shaklin. Written and directed by Ralph Bakshi. Running time: 77 minutes. Classifier's warning: very crude scenes and dialogue. Rated Restricted entertainment.
ONCE AGAIN IT'S the time of year when the Oscars become the hottest topic in any Hollywood conversation. Three names calculated to chill the chatter, though, are Marlon Brando, Gerard Damiano and Ralph Bakshi.
All three have become an embarrassment to the Film Establishment.
Brando, an actor, is out of favour among Academy loyalists for his pointed refusal to accept their honour last year. He's a troublemaker.
Damiano, an independent producer, has never been in favour despite the fact that he wrote and directed two of last year's top money-making movies, Deep Throat (1972) and The Devil in Miss Jones (1973). He's a pornographer.
Bakshi is actually the least offensive of the three. He is merely incomprehensibly iconoclastic, the cartoon-maker who insisted on making Fritz the Cat (1972). He's just an artist.
Like the trouble-making actor and the money-making pornographer, he's a pariah, someone to be shunned, discouraged and, if necessary, disavowed. It doesn't matter that his latest film, Heavy Traffic, is absolutely brilliant, an extension of the revolution that Fritz started and a confirmation that Bakshi is, indeed, a major creative force in the film community.
He's not one of the boys.
Most people can recognize craftsmanship. Inspiration — perhaps even genius —  is something else. Heavy Traffic falls in the category of something else. Here there is no such thing as consensus, only strongly-held points of view, those sparks of contention that leap out from an electric experience. No critic worth the name can remain aloof.
Reviewer Robert Frederick, for,example, lost his cool completely. Writing in the trade paper Variety, he called the film "a blatant example of hardcore pornography.
"There's something" he said, "to offend everyone in this melange of crudely-conceived, amateurishly-animated stuff. From the one extreme of a crude, sexually-oriented attack on Christianity, it manages to take a crack at every type — from the Jewish mother to the Mafia.”
That's one view. So, now that we've heard from the opposition, let me tell you what I think.
Bakshi is brllliant. Almost single-handedly the New York-born film-maker is bringing about a renaissance in animated features, potentially the purest, most potent form of cinema art.
Unlike live-action films, which are, for the most part, bound to view the world in realistic terms, animations are undiluted artistic invention, acceptable on their own as flights of absolute fantasy.
Where live-action films are, for the most part, bound to the dramatic conventions of plot and character development, animations offer filmgoers adventures in mood and style conceived and executed strictly for their own sake.
Although the best live-action films will affect filmgoers viscerally, through a superb handling of plot and character conventions, animations are able to dazzle their audiences directly, to involve them head-on with sensations and ideas.    Bakshi got his original inspiration for Heavy Traffic from Hubert Selby, Jr.'s 1964 novel Last Exit to Brooklyn. A tale of unrelieved squalor and despair, Selby's book was the subject of much litigation in the mid-60s, the result of its explicit and frankly shocking sexual fantasies.
The book was a collection of short stories chronicling the soul-destroying existence of the modern urban poor.
Into this milieu, Bakshi brings his own semi-autobiographical tale of Mike, a tenement-dwelling youth — by his own admission, 22 and still a virgin — who dreams of becoming a cartoonist; His worlds, one on paper, the other on the streets, are peopled by grotesques, a collection of freaks that includes his own parents — Angie, an Italian-American labour organizer, and Ida, his resentment-filled Jewish mother.
The film's story unfolds in the head of a live-action Mike who fantasizes the whole thing while playing a penny-arcade pinball machine. Mike, we learn, is infatuated with Carol, a striking black barmaid, and in the course of his daydreams he becomes first her friend, then her lover, and finally her pimp and accomplice in murder.
Along the way, he imagines violent encounters between Snowflake, a masochistlc transvestite, and a  burly trucker; between himself and a street gang busily gangbanging a compliant slum goddess; between his father and mother and between his father and The Godfather.
In every instance Bakshi's caricatures distort reality into Bosch-like visions that take on the consistency of nightmares, recalled with wit and compassionate understanding.
If Mike's (and, by extension, Bakshi's) fantasies are gross, violent and sex-obsessed, it is because he lives in a gross, violent, sex-obsessed world. In Selby's book, life in the big city was equated with life in a jungle, an environment in which self-dignity had been replaced by self-gratification.
In Selby's world, pain and pleasure were the sole parameters of self-knowledge and self-expression.
Bakshi understands and empathizes, adding to it his own sense of pop artistry. Unlike Selby, though, he does not despair. His film has a hopeful message for that isolated, alienated urbanite. Where there is humour, there is humanity.

AFTERWORD: One cartoonist who did not want to be Walt Disney, Ralph Bakshi was a force of nature. Famous as a pioneer of "adult" animation, he made a total of eight cartoon features, including the first film adaptation of J.R.R. Tolkien's The Lord of the Rings (1978). A truly mixed bag of outrage and ambition, his movies remain worthy of serious critical consideration (and will be in reviews that I will restore in future editions of Reeling Back). Indeed, the popular taste for Japanese anime today may well be the fruit of those revolutionary seeds sown by Bakshi's art.