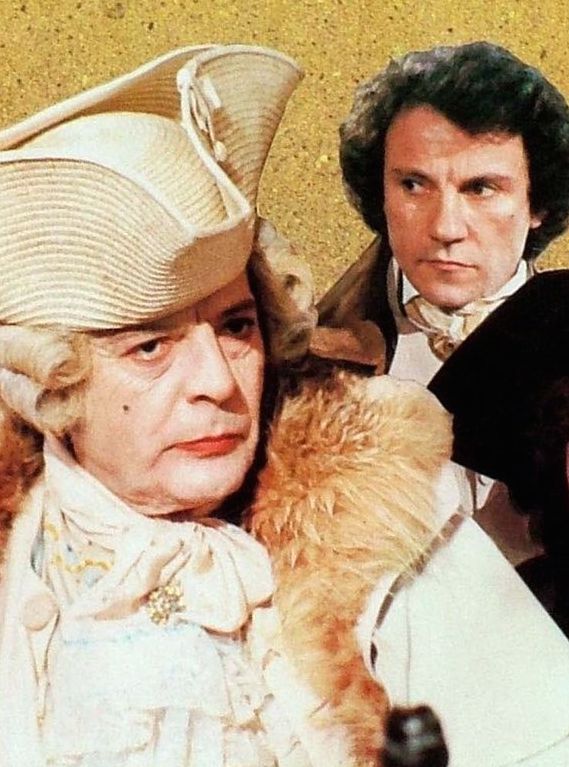 In pursuit of history


On this day (June 22) in 1791, France’s King Louis XVI took flight from Paris and the revolutionaries who sought to end his reign. An historic moment, its significance is discussed by a coach-load of chatty notables who bring it to life in director Ettore Scola’s 1984 feature La Nuit de Varennes.

LA NUIT DE VARENNES (That Night in Varennes). Co-written by Sergio Amide. Based upon Catherine Rihoit’s 1982 novel La Nuit de Varennes ou l'Impossible n'est pas français. Music by Armando Trovajoli. Co-written and directed by Ettore Scola. Running time: 151 minutes. Mature entertainment with the B.C. Classifier’s warning: occasional nudity and suggestive scenes. In French with English subtitles. THE REVOLUTION HAS COME. The king, in an effort to reach troops still loyal to his cause, flees his palace in the dead of night.
During the long day of June 22, 1791, France’s Louis XVI (Michel Piccoli) and his queen, Marie Antoinette (Eleonore Hirt), travel northeast from Paris.
That evening, La Nuit de Varennes (That Night in Varennes), they are taken into custody and returned to their capital, where they will live in the shadow of the guillotine for 19 more months.
Alexander Dumas considered “the flight to Varennes . . . the most significant event in the French Revolution, perhaps even in the history of France.” The problem for the filmmaker is how to turn a complex historical moment into a couple of hours worth of screen entertainment.
Italian director Ettore Scola’ s new French-language feature offers one interesting, elegant solution. Borrowing from Guy de Maupassant’s 1880 short story Boule de Suif — as did John Ford for his 1939 feature Stagecoach — Scola assembles a cast of historical (and some fictional) characters and sends them down the same road as the royal fugitives.
Aware of the significance of this dramatic event is Nicolas Edamé Restif de la Bretonne (Jean-Louis Barrault). A popular author, diarist and genuine man of the people, Restif sets off on the chase after overhearing a conversation in his neighbourhood brothel.
Sure that the king is already in full flight, Restif attempts to join his friend and associate, the English-born American revolutionary pamphleteer Tom Paine (Harvey Keitel) on the Verdun-bound stagecoach.
Though it leaves without him, Restif presses on on horseback. Along the way he encounters a soulmate, the erotic diarist Casanova, Chevalier de Seingalt (Marcello Mastroianni), himself in flight from his personal patron, the Count Waldstein.
Together, they join the travellers already on the stage. Despite his age and obvious lack of interest, Casanova’s reputation still brings a sparkle into the eyes of the ladies, a trio that includes the Countess Sophie de la Borde (Hanna Schygulla), wealthy widow Adélaide Gagnon (Andréa Ferréol) and operatic diva Virginia Capacelli (Laura Betti).
Scola’s idea is to personify the various forces tearing France asunder, and for once this somewhat theatrical strategy works a treat. His literate screenplay, written in collaboration with the late Sergio Amidei, puts much wit and some wisdom into his characters’ mouths. A high-powered international acting ensemble does the rest.
Historically, the escape attempt was a tragic miscalculation for the unlucky Louis. Cinematically, Scola has turned his La Nuit de Varennes into a breathlessly paced intellectual adventure.

Afterword: My suggestion in the above review that La Nuit de Varennes was a Stagecoach for history buffs was meant as a high compliment. To this day it remains one of my favourite films. Its focus on a single day viewed from multiple perspectives was a concept that director Ettore Scola carried off brilliantly. In his feature, he brought a complex historical moment alive for me, and I can’t help but liken his moment to ours. Just as the characters in his movie are caught up in transitional times, so are we, and the conversation is global. Tomorrow (June 23, 2020) is the official publication date of former U.S. National Security Advisor John Bolton’s tell-all memoir The Room Where It Happened. It will take its place on a shelf already groaning under the weight of nearly two dozen tomes written by pundits, reporters and former members of President Donald Trump’s administrative team. Have there ever been more flies on the White House walls, all buzzing to share what they’ve seen and heard?
Born in 1931, Ettore Scola was a product of turbulent times. He grew up in Fascist Italy, experiencing its Second World War defeat and puberty at approximately the same time. Dropping out of college in his mid-teens, he honed his artistic skills as a cartoonist for the satirical magazine Marc'Aurelio. There he met one of his artistic idols, Federico Fellini, an acquaintance who helped him find work in the film business as a screenwriter. He made his debut as a director in 1964 with an inventive comedy called Let’s Talk about Women, in which Vittorio Gassman starred as nine different characters. La Nuit de Varennes was the 18th of Scola’s 30 fictional features — he was also a prolific documentarist — and the second to confine its action to a specific, single day. The first was 1977’s Una giornata particulare (A Special Day), set on May 8, 1938, famous as the day that Benito Mussolini welcomed his friend and ally Adolf Hitler to Rome. Nominated for a best foreign language film Academy Award, it also happened to be an Italo-Canadian co-production.