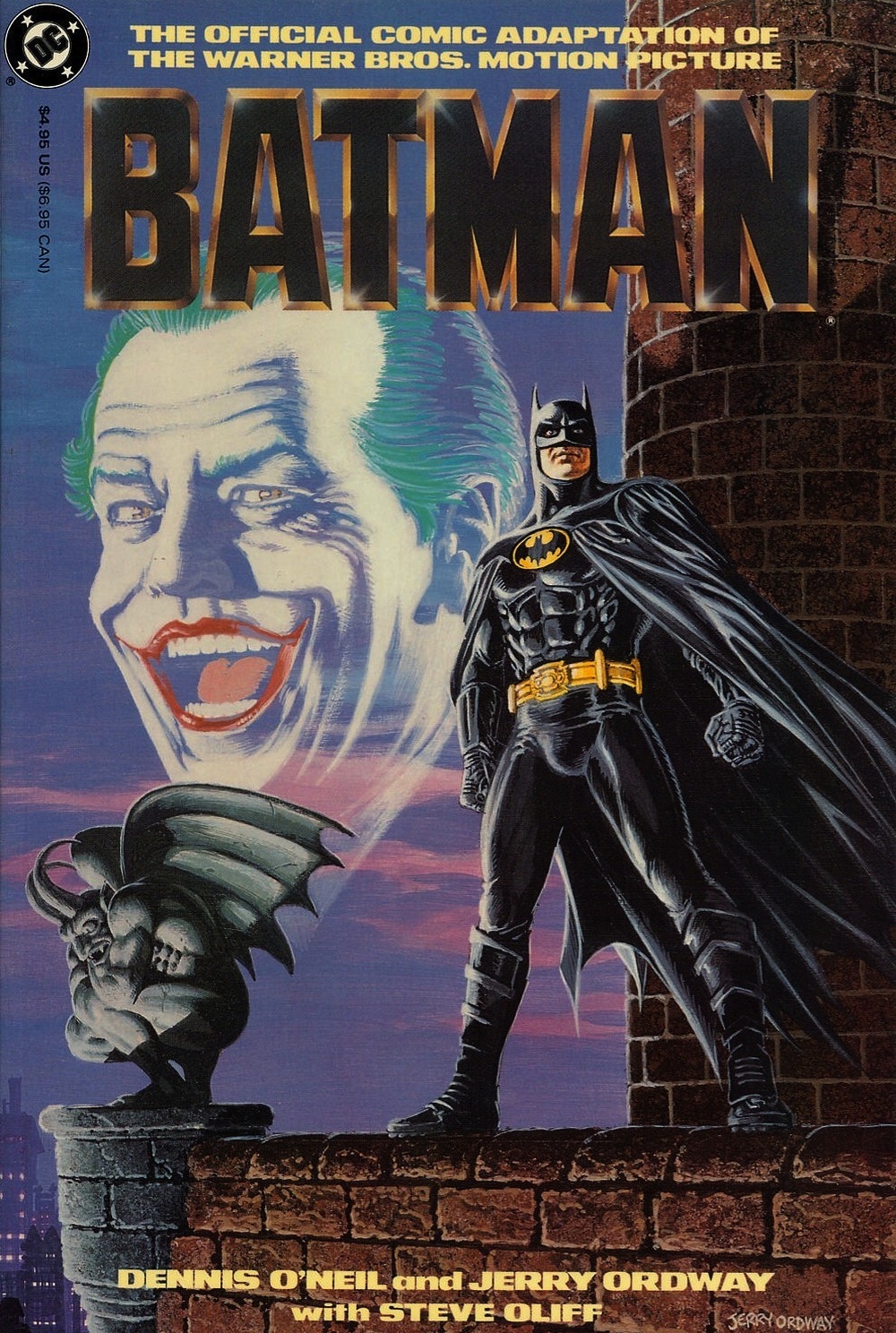 In 1989, DC Comics, currently a subsidiary of the Time Warner media conglomerate, published a comic book adaptation of Batman, a feature film released by another Time Warner subsidiary, Warner Bros. Pictures. The movie was based on a DC Comics character created in 1939.


To mark the twelfth annual Free Comic Book Day, happening today (May 3) in most comic-book specialty shops, Reeling Back recalls 1939, 1989 and the first major motion picture to feature Batman.

Friday, June 23, 1989.
BATMAN. Written by Sam Hamm and Warren Skaaren, based on characters created by Bob Kane. Music by Danny Elfman and Prince (Rogers Nelson). Directed by Tim Burton. Running time: 126 minutes. Mature entertainment with the B.C. Classifier's warning: some violence, occasional coarse language and swearing. IT WAS THE SANEST of times. It was the craziest of times.
It was 1939, the year that New York played host to a world's fair that offered a look at the wonders science promised for "the world of tomorrow."
That same year, the world went to war. For millions, tomorrow's science produced only apocalyptic suffering and destruction.
In 1939, a teenaged comic-book artist named Bob Kane created The Batman.
Times sane; times crazed.
In bringing Kane's Batman to the screen, director Tim (Beetlejuice) Burton realized that the character exists in a noir moment all his own.
An urban vigilante — Death Wish, anyone? — The Batman was the product of a particular era's techno-angst. To make its fantasy work, the film plunges us into an alternate reality.
Here is an other-world in which wealthy socialite Bruce Wayne (Michael Keaton in an intense, low-key performance) dons body armour, cape and a bat-eared hood to venture forth upon a nocturnal anti-crime crusade.
Among the criminals is "the world's first fully-functioning homicidal artist," a facially deformed psychopath called The Joker (Jack Nicholson, making the role uniquely his own).
Neither a sequel nor a series picture, Batman was the summer's biggest gamble. Even so, Burton knew that it could be done.
A decade ago [1978], Richard Donner directed the unknown Christopher Reeve in a soaring, triumphant adaptation of Superman. An exercise in alternative reality, it succeeded because it effectively explored both the human and mythic in its characters.
Like Donner, Burton demonstrates a respect for his source material and daring in bringing it to life on screen. To bring out the essential madness in Kane's world, he sets his picture in an expressionistic never-when.
Burton's Gotham City is a monumental cross between Fritz Lang's Metropolis (1927) and the Los Angeles of Ridley Scott's Blade Runner (1982). His characters, compulsives all, interact in its moody, ever-shifting shadows.
A dark, compelling vision, the film's striking visuals are enhanced by Danny Elfman's music, a haunting, imaginative score reminiscent of Toto's work for David Lynch's Dune (1984). Burton's quirky artistry makes of Batman's tale an accomplished adventure-fantasy that blends elements of black comedy and psycho-drama.

Afterword: Unlike Richard Donner, who established the tradition of casting little-known actors to play Superman, Tim Burton chose to go with a star performer in the Batman role. Although he'd made his reputation as a comedian — including the title role in Burton's own previous picture Beetlejuice (1988) — Michael Keaton surprised the comic-book character's fans with a quietly nuanced performance, one that he repeated in the Burton-directed sequel Batman Returns (1992). Other name actors who've worn the bat mask since are Val Kilmer (Batman Forever, 1995), George Clooney (Batman & Robin, 1997), and Christian Bale (Batman Begins, 2001; The Dark Knight, 2008; The Dark Knight Rises, 2012).