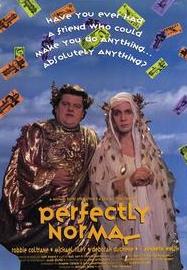 In tune with Toronto


An international success as a director of films for both the big screen and TV, Yves Simoneau is a product of Québec’s vibrant movie industry. Born on this day (October 28) in 1955, he first demonstrated his English-language skills with a quirky 1990 feature comedy Perfectly Normal.

PERFECTLY NORMAL. Written by Eugene Lipinski and Paul Quarrington. Music by Richard Gregoire. Directed by Yves Simoneau. Running time: 107 minutes. Rated Mature with the B.C. Classifier’s warning "some very coarse language, occasional swearing, nudity and suggestive scenes.” LISTEN UP, FILM STUDENTS.
Vancouver’s schools may be closed, but the learning never stops. Today's topic is domestic Canadian cinema.
This morning, we take up the question of the Toronto movie: Is there such a thing and, if so, what does it look like?
Some of its vital elements are immediately obvious.
An authentic Toronto movie has to be based on an idea from somewhere else — Winnipeg, perhaps, but preferably New York.
The story's setting will, of course, be identified as someplace other than Toronto.
The central character must lead a dull life, existing in a milieu in which hockey and beer are the cultural mainstays. Ethnically, it is a world peopled by Scots, Italians and Central Europeans.
Dramatic conflict arises out of the Torontonian's love-hate relationship with American enterprise, a force that's both seductive and deeply disturbing to naturally non-dynamic Ontario natives.
Based on our outline, director Yves (Pouvoir intime) Simoneau's Perfectly Normal is the perfect Toronto movie. A quirky, self-consciously stylish satirical comedy, it manages to be a great deal of fun in the process.
Set in the fictional Canadian metropolis of Long Bay, it is the story of Renzo Parachii (Michael Riley), an Italo-Canadian brewery worker and goaltender for the Tate Titans, the company hockey team.
A dull boy with few dreams, Renzo becomes even more withdrawn following the death of his opera-loving mom (Vivian Reis).
One grey winter night, a force of nature in the person of fugitive Florida restaurateur Alonzo Lafayette Turner (Robbie Coltrane) comes into his life.
Turner moves in with Renzo, eventually convincing him to finance Turner's own dream, an Italian cuisine dinner theatre called La Traviata. The gimmick is that the entire staff is costumed, each one representing a character from some grand opera.
The film's concept, developed into a screenplay by Eugene Lipinski and Paul Quarrington, bears the Manhattan seal of approval. It is, after all, an acknowledged variation on Mel Brooks’s 1967 classic The Producers, with Scots comic Coltrane doing a thoroughly delightful take on Zero Mostel's devious Broadway dream merchant.
Under Simoneau's direction, the plot fits Toronto to a T. The Québécois filmmaker's actively surreal style extracts the humour hidden within Hogtown's laconic smugness.
I'll always treasure one underplayed exchange between Renzo and his pool-playing girlfriend Denise (Deborah Duchene), the counter girl at the local ice rink.
"Do you want to come back to my place?" he asks her, passionlessly.
"I don't know," she says, apparently not responding to his low-key, Central Canadian sweet-talk. "Are you going to tear my clothes off and ravish me until I start talking to God?"
"Something like that."
"OK,” she says agreeably.
A true Toronto picture, Simoneau's vision was, of course, achieved using someone else's money. The "Bialystock & Bloom Ltd." production acknowledges its debt to Telefilm Canada, the Ontario Film Development Corp. and Telefilm's English equivalent, British Screen Finance.
The result is a surprisingly entertaining example of the old subsidy cultch. It's all right, eh?

Afterword: Daily newspaper movie reviews are nothing if not local. In Febuarury 1991, a labour dispute that had shut down Vancouver schools was a Page One story, so it made sense to refer to it my page 36 film column. Old news in 2018, it was a timely way to start a note on director Yves Simoneau’s “Toronto movie” Perfectly Normal.
His working visit to Toronto marked a major career change for the Québec City-born filmmaker. At the time, Simoneau had five French-language feature films to his credit. His 1986 crime thriller Pouvoir intime had received nine Genie Award nominations, including best picture and direction. With Perfectly Normal, also a Genie best-picture nominee, he proved his ability to succeed in Canada’s other official language. Wasting no time, he established himself as an international talent, directing an all-American project. Shot on location in Tennessee, his 1992 made-for-TV race-relations drama Memphis starred Cybill Shepherd.
Since then, he’s hardly paused, amassing frequent-flyer points pursuing projects in the U.S. and Canada for both television and the big screen. He touched down in Hollywood itself to direct Jamie Lee Curtis in the 1993 domestic drama Mother’s Boys, and spent time in Europe and North Africa helming the epic 2002 TV mini-series Napoléon. Simoneau’s career highlight to date is the 2007 HBO movie Bury My Heart at Wounded Knee. The filmed-in-Calgary historical drama was nominated for 17 Emmy Awards and won five, including the best made-for-TV-movie and director statues.
And, yes, he’s worked in Vancouver. His local credits include the 1997 TV sci-fi feature Intensity; two 2001 episodes of the horror/fantasy series Night Visions; the 2001 TV movie Ignition; the 2004 pilot episode of the sci-fi series The 4400; the pilot and three episodes of the 2009 alien invasion series V; and 2015’s Unveiled, a quirky TV movie about guardian angels. Vigourous and versatile, Yves Simoneau celebrates his 63rd birthday today (October 28).