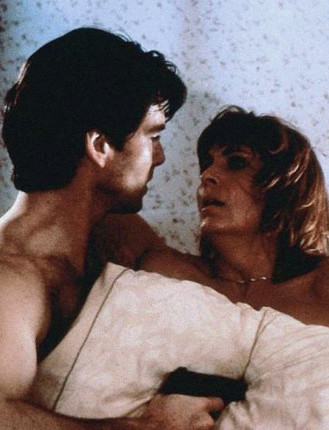 Is no more Mr. Nice Spy


Returning to some serious Russophobia


Reeling Back, an archive of the work the gracefully aging movie critic Michael Walsh, first went forth on this day (October 3) in 2013. Its launch into cyberspace was announced during the opening ceremonies of VCON 38. This website’s first, second and third anniversaries celebrated subsequent editions of Vancouver’s annual science-fiction fan convention with a package of postings keyed to each event’s programming. This year is different. Since VCON 41.5 doesn't open until October 28, Reeling Back’s fourth birthday is its own celebration. Because I always intended the site to be an information resource, each film review posted here is also linked from the picture’s Internet Movie Database (IMDb) page. Making this anniversary especially happy is the fact that today’s posting is my 600th review linked to the IMDb. (Though its primary focus is on feature films, regular visitors know that the archive contains reports and opinion pieces on a variety of subjects. As of this morning, the Contents Page dropdown menu offers a Full Site Index to 835 items.) In fulfillment of the Reeling Back motto, “Everything Old Is News Again,” today’s restored review is from a time when much of the popular culture reflected the view that Russian plots were everywhere and that every plot threatened the good old U.S.A. To celebrate our own fourth, we recall author Frederick Forsyth’s fourth novel adapted into a movie, British action director John Mackenzie’s 1987 thriller The Fourth Protocol.

THE FOURTH PROTOCOL. Co-written by Frederick Forsyth, George Axelrod and Richard Burridge. Based on Forsyth’s 1984 novel. Music by Lalo Schifrin. Directed by John Mackenzie. Running time: 119 minutes. 14 Years Limited Admission with the B.C. Classifier's warning: some violence, occasional very coarse language, nudity, and suggestive scenes.
IS FOR WIMPS, THIS glasnost! Is not for true sons of the Revolution like General Govorshin, chairman of the KGB.
Secret protocol clause in 1968 Nuclear Non-Proliferation Treaty says nyet to atomic terrorism. Thawing in cold war is starting then.
Is now time for action to stop thawing. Nyet to The Fourth Protocol.
Is no more Mr. Nice Spy.
In this week's Michael Caine movie, the London-born actor has the world-saving role in an old-fashioned, straightforward, no-nonsense thriller. As adapted by Frederick Forsyth from his 1984 novel, The Fourth Protocol is a slickly suspenseful tale with readily identifiable good guys, bad guys and a ticking clock.
Caine, who is also on view locally [August, 1987] in Whistle Blower and Jaws: The Revenge, plays John Preston, a senior spycatcher for British counter-intelligence. Independent and insubordinate, Preston is too effective for his own good.
Acting on his own initiative, he has managed to get the goods on a traitor within the department, a coup that proves to be a serious embarrassment to his immediate superior, stuffy Acting Director Brian Harcourt-Smith (Julian Glover).
For his trouble, Preston is reassigned to the secret service's version of  Coventry — C5: Airports and Port Security.
Unbeknownst to either the Brits or the Soviets, General Govorshin has set in motion his own personal plan to destabilize the Western Alliance. Operating under the general's direct orders, Major Valeri Petrofsky (Pierce Brosnan) is now resident in a housing development on the perimeter of RAF Bayswater, an aerodrome used by the U.S. nuclear strike force.
Under the direction of ordinance Colonel Irina Vassilievna (Joanna Cassidy), Petrofsky is to assemble and detonate a device of sufficient power to devastate two square miles of the local landscape. In the absence of any other explanation, Washington will take the blame for a tragic accident, and the political shockwaves will force American nuclear arms out of Europe.
Never mind that events in the real world have rendered the novelist's hardline plot unlikely. Under the polished direction of John (The Long Good Friday) Mackenzie, Forsyth's professionally doctored screenplay positively crackles with headlong tension.
It opens in the depths of a Russian winter with the summary execution of an aging Kim Philby (Michael Bilton). Filmgoers are then introduced to the ruthless Major Petrofsky and his secret mission.
Here, we're quickly told, is a picture that will unfold in the glossy, formal style of the 1940s. This is movie in which all characters speak English all the time.
Is to be taken seriously when Soviet security officials betrayed by Govorshin — Generals Karpov (Ray McAnally) and Borisov (Ned Beatty) — carry on like pair of good old boys. Is not for funny because this is picture lacking in humour considered de rigueur in right-now action film.
A breathlessly paced throwback to an earlier era, The Fourth Protocol actually manages rather well without it.

Afterword: In his 2015 autobiography, The Outsider: My Life in Intrigue, author Frederick Forsyth says that he was recruited by a member of Her Majesty’s secret service in late 1968. At the time, he was working as a freelance reporter covering the Biafran civil war in southeastern Nigeria. Forsyth's life as a spy went on for “more than 20 years.” It paralleled his career as a best-selling novelist, and he may have been working for MI5 when the above review was written. The Fourth Protocol was his fifth novel, and his fourth book adapted as a movie. It followed director Fred Zinnemann’s 1973 adaptation of The Day of the Jackal, Ronald Neame’s The Odessa File (1974) and John Irvin’s The Dogs of War (1980).
To date there have been no revelations suggesting that Michael Caine ever worked for any real-life intelligence agency, but the Cockney actor is famous for playing spooks. He played a lot of them, thanks to Harry Saltzman, co-producer of the first three James Bond features. The Canadian-born movie mogul was determined to capitalize on the popularity of his larger-than-life Bond by giving audiences a “thinking man’s spy.” Saltzman had acquired the rights to Len Deighton’s 1962 novel, The Ipcress File, the thriller that introduced readers to reluctant British agent Harry Palmer, and he offered Caine a seven-year contract in the movie role. It was Caine’s breakthrough to stardom, and he played the part for Canadian director Sidney J. Furie (in 1965’s The Ipcress File), for Guy Hamilton (Funeral in Berlin; 1966), and for Ken Russell (Billion Dollar Brain; 1967). Years later, he returned to the Harry Palmer role in two made-for-TV features, Bullet to Beijing (1995) and Midnight in Saint Petersburg (1996). Before starring in The Fourth Protocol, Caine had played secret agents for director Don Siegel (in 1974’s The Black Windmill); John Sturges (The Eagle Has Landed; 1976) and Terence Young (The Jigsaw Man; 1983).
In the above review, I called The Fourth Protocol, “this week’s Michael Caine movie.” An actor with an over-active work ethic, it often seemed that he was everywhere and in everything. In 1986, he was in five theatrical features, including Hannah and Her Sisters. A serious film from writer-director Woody Allen, it earned Caine his fourth Academy Award nomination and his first win. The Fourth Protocol was one of his three 1987 films, followed by two in 1988 and three more in 1990. Yes, he did well in his spy roles — he recently made fun of himself in the 2015 comedy Kingsman: The Secret Service — but avoided being typecast by the sheer volume of his work in every other movie genre. Still an overachiever, Michael Caine’s third movie of 2017, a comedy called Coup d’Etat, is currently in post-production and should be out in time for Christmas.