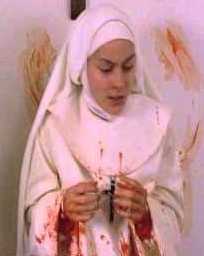 Sister Agnes (Meg Tilly) is at the centre of the conflict between faith and reason in director Norman Jewison’s 1985 drama Agnes of God.


Drama offers a clash of symbols


It’s 2018, so today (February 14), is both Christianity’s Ash Wednesday and the more secular St. Valentine’s Day. Should we give up chocolate for Lent, or indulge in it? In 1985, Meg Tilly, born on this day in 1960, starred in director Norman Jewison’s tale of choices, Agnes of God.

AGNES OF GOD. Written by John Pielmeier, based on his 1979 stage play. Music by Georges Delerue. Co-produced and directed by Norman Jewison. Running time: 97 minutes. Mature entertainment with the B.C. Classifier’s warning: Occasional coarse language and gory scenes. A SCREAM RENDS THE silence of the cloister. Sister Agnes (Meg Tilly), an ethereal young novice of the order of soeurs de Marie Magdalene, is in distress.
Sister Miriam Ruth (Anne Bancroft), the convent’s Mother Superior, finds Agnes kneeling in the darkness of her cell, blood soiling her hands and staining the white linen of her habit. Blood also streaks the sides of a wastebasket where the older nun finds a tiny corpse —a newborn baby strangled with its own umbilical cord
In Agnes of God, Canadian director Norman (A Soldier’s Story) Jewison's first made-in-Canada film, the facts are clear enough. What is not clear is their meaning.
Based on screenwriter John Pielmeier’s 1979 stage play, its facts are used to involve Dr. Martha Livingston (Jane Fonda), a lapsed Catholic and the psychiatrist appointed by the court to determine Agnes’s mental fitness to stand trial for murder. Assigned to perform an examination, the good doctor throws herself into what might better be called an investigation.
No, it doesn't make sense. Pielmeier thinks he can get away with it dramatically if we recognize that Dr. Livingston is his living symbol of the rock of Reason. Inevitably, she comes into conflict with Mother Miriam, who believes that the simple-minded Agnes is somehow touched by God, and who must, therefore, symbolize Faith.
As a playwright, Pielmeier takes a good idea and crawls with it. A man with nothing particularly interesting, eloquent or persuasive to say on behalf of either faith or reason, his approach to intellectual discourse is to have his characters indulge themselves in regular shouting matches, a desperate and superficial clanging of symbols meant to simulate drama.
In an attempt to provide his tale with  a semblance of milieu, Jewison's screen version sets the action in and around Montreal. Between confrontation scenes, we are treated to views of the sisters praying, ice skating, tending the convent's cattle and attending religious services.
Unfortunately, no amount of visual padding can fill the void that is at the core of Pielmeier's dreary melodrama. His failure to deal with any of the genuine issues of contemporary religion or science makes the effort little more than a work of spiritual exploitation.
Hard pressed to find much humanity in their dialogue, both Fonda and Bancroft fall back on collections of familiar star mannerisms. Tilly, by contrast, has the advantage of being cast as a holy fool, and uses it to steal the show with her unique, otherworldly performance.
Catholics old enough to remember the Latin Mass will recognize in the title Agnes of God a play on the words Agnus Dei (Lamb of God), one of the Church's titles for the Christ the Saviour. A weak, obvious attempt at cleverness, it reflects the film's low level of creative invention.

Afterword: An Academy Award nominee for her performance in Agnes of God, actress Jennifer Tilly’s younger sister Meg made her breakthrough to stardom in I983.That year she starred in director Richard Franklin’s Psycho II, and was part of the powerful performing ensemble Lawrence Kasdan put together for The Big Chill. Among the year’s top-grossing films, Kasdan’s class-reunion comedy was nominated for a best picture Oscar. At the very centre of it was Meg Tilly’s character, Chloe, an ethereal young woman who seemed wise beyond her years.
In the mid-1990s, Tilly took a break from acting to be a mother to her three children. Writing became her creative outlet and, between 1994 and 2014, she published six novels. At first, I followed her career because, in common with Margot Kidder and Kim Cattrall, she was a  talented actress with B.C. roots. Today, I realize that two of her performances touched me in surprisingly personal ways. With Chloe, her Big Chill character, she seemed to be channelling my first serious high school sweetheart. Thirty years later, in the 2012-13 TV series Bomb Girls, she played Lorna Corbett, a home-front mother working in a munitions factory during the Second World War. Incredibly, in her pitch-perfect performance, I felt the presence of my own mother. An actress of many parts, Meg Tilly turns 58 today.