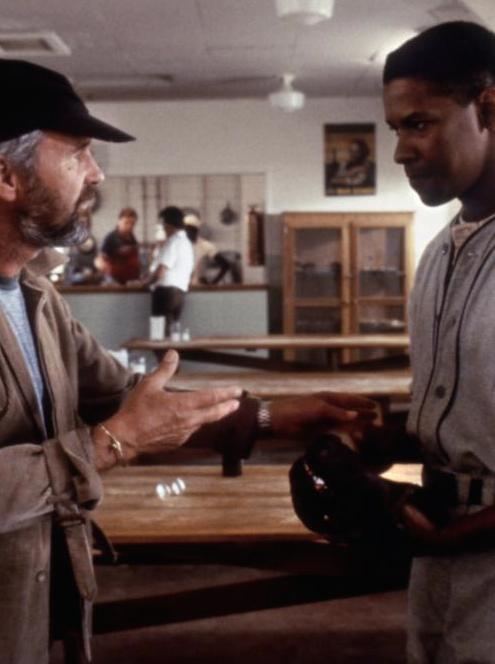 A credit to his race


Testing our emotional growth and maturity


The 2016 Republican National Convention concludes today (July 21) in Cleveland, Ohio. Although it will now be known as the place where Donald Trump officially became his party’s presidential candidate, I will always remember it as the city where Sylvester Stallone played a dynamic union organizer championing workers’ rights in the 1978 feature F.I.S.T.. As speakers at the convention stoked fears of a new cold war, I flashed on the inept militiamen led by a blustering Paul Ford in that 40-year-old détente comedy The Russians Are Coming! The Russians Are Coming! (1966). Candidate Trump’s choice of Christian conservative Mike Pence as his running mate has left one group of traditional GOP supporters confused. Religious fundamentalists haven’t felt so whipsawed since they were called upon to boycott the rock musical Jesus Christ Superstar (1973). Trump's populism, including his opposition to so-called free trade agreements, is a cause for concern among the GOP's traditional sponsors, the multinational corporations. They thought they'd all but sewn up their dream of global rule, foretold in 1975’s Rollerball (1975). Meanwhile, on the streets, demonstrators reminded the world that “black lives matter,” one among many messages in that classic tale of racism and reconciliation from 1967, In the Heat of the Night (1967). As it happens, every one of those movies was directed by the great-hearted Norman Jewison. Born in Toronto on this day (July 21) in 1926, he went on to make A Soldier’s Story (1984).

Friday, September 28,1984.
A SOLDIER'S STORY. Written by Charles Fuller, based upon  his 1981 stage play A Soldier's Play. Music by Herbie Hancock. Produced and directed by Norman Jewison. Running time: 104 minutes. Mature entertainment with the B.C. Classifier's warning: occasional violence and very coarse language.
THE FACTS. MASTER SERGEANT Vernon C. Waters (Adolph Caesar) is dead. The murder weapon was a 45-calibre standard army issue automatic in the possession of person or persons unknown.
The crime was committed in the dead of night off the rural road leading to Fort Neal, Louisiana. M/Sgt. Waters, drunk and apparently unwilling to defend himself, was viciously beaten prior to being shot.
It is 1944, and the base commander knows that he is sitting on a powder keg. "The worst thing you can do in this part of the country is pay too much attention to the death of a coloured under mysterious circumstances," Colonel Nivens (Trey Wilson) tells the self-assured captain sent down from Washington to investigate the matter for the War Department.
Capt. Richard Davenport (Howard E. Rollins, Jr.) will not be put off. He senses a coverup, and he has his orders. Even in the racially-segregated Second World War U.S. Army, justice must be done.
Grudgingly, Col. Nivens gives way. Even so, he feels it necessary to warn Davenport that "you're the first coloured officer these men have ever seen. The Army expects you to set an example for them and be a credit to your race."
A genuine credit to his race is producer-director Norman Jewison. By all accounts a splendid human being, Jewison offers in A Soldier's Story an example of dramatic filmmaking at its finest.
In one sense, the Toronto-born director is returning to familiar territory. His racially charged murder mystery In the Heat of the Night was not just a popular hit but the winner of the 1967 Best Picture Academy Award.
In another sense, he is forging ahead, using his previous success as the foundation for a dynamic new set of issues and dramatic challenges. Working from writer Charles Fuller's own adaptation of his Pulitzer Prize-winning Off-Broadway play, Jewison, involves us in a test of our own emotional growth and maturity.
A richly textured, flawlessly acted suspense drama, A Soldier's Story expertly plays upon the filmgoer's expectations and unacknowledged prejudices. Ever playful, Jewison has given us a film in which all of the white men look alike.

Afterword:  Denzel Washington’s second feature film appearance, A Soldier’s Story allowed the actor to play the role that he had originated in the 1981 Off-Broadway stage production A Soldier’s Play. He become a major star (and earned his first Oscar nomination) three years later, playing South African political activist Steven Biko in director Richard Attenborough’s 1987 feature Cry Freedom. In 1999, Washington had the title role in Norman Jewison’s The Hurricane, a sports biography in which he played boxer Rubin Carter (and earned his fourth Oscar nomination).
A Soldier’s Story was the 16th of 24 feature films directed by Norman Jewison. In 2004, he chronicled his half century behind the camera in This Terrible Business Has Been Good to Me: An Autobiography. Earlier this week (July 18), Toronto gossip columnist Shinan Govani offered a Jewison career summary in which he noted that “he turns the big 9-0 this week.” As someone who has admired his work since he was a mere 4-0, I’m pleased to report that on his 90th birthday (July 21) a great Canadian remains a living legend.

See also: Other Norman Jewison features in the Reeling Back archive are his 1969 newspapering comedy Gaily, Gaily, the rock opera Jesus Christ Superstar (1973), the sci-fi classic Rollerball and the urban drama F.I.S.T. (1978). In addition, Jewison was executive producer on director Bruce McDonald’s 1994 feature Dance Me Outside.