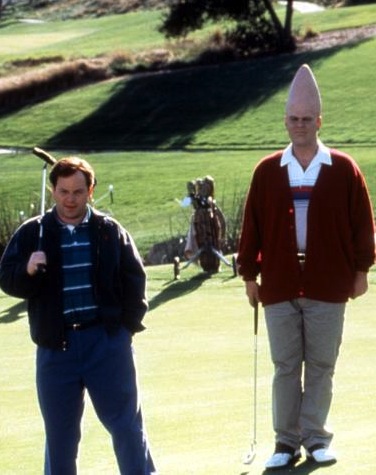 Beldar Conehead (Dan Aykroyd) practices his suburban-assimilation skills during a round of golf with next-door neighbour Larry Farber (Jason Alexander).


While Canadians are taking time off to mark Thanksgiving Day, our American friends celebrate Columbus Day, the U.S. national holiday that recalls the voyage of a Genoese mariner who fetched up in the Caribbean while searching for Asia on behalf of the Spanish crown. (Now, doesn't that sound like the plot of an Adam Sandler comedy?) So far this weekend, we've made a meal of four motion-picture misfires based on television shows. Saturday, we criticized the housekeeping arrangements of 1994's The Flintstones and The Addams Family (1991). Yesterday, we took aim at screen gobblers Car 54, Where Are You (1994) and 1980's The Nude Bomb. (All previous Reeling Back postings can be found in the Full Site Index. Just click on the words Front Page on the menu line above.) Today, we're down to the big bird's stuffing, with a pair of films spun off from variety show skits. Our final portion of turkey, 1993's Coneheads, was inspired by a series of Saturday Night Live routines that starred a Canadian, Ottawa-born Dan Aykroyd. He plays Beldar Conehead who is, like Columbus, an off-course alien. To wash it all down, our beverage of choice is the SCTV spinoff Strange Brew: The Adventures of Bob and Doug McKenzie (1983).

Sunday, July 25, 1993.
CONEHEADS. Written by Tom Davis, Dan Aykroyd, Bonnie Turner and Terry Turner. Based on characters created for the television show Saturday Night Live (NBC, 1976-77). Music by David Newman. Directed by Steve Barron. Running time: 86 minutes. Rated Mature with the warning "occasional coarse and suggestive language, nudity."
"HERE'S THE PROBLEM," says Buck Henry in his introduction to the 1979 book Rolling Stone Visits Saturday Night Live. "I personally have never thought that they were very funny."
My problem, too. Television's longest running youth cult artifact, SNL always seemed more smug than satirical and is seldom worth a snicker, let alone a laugh.
Compared to other cult comedy items — Monty Python, SCTV, The McLaughlin Group
No matter. The financial success of the Wayne's World feature convinced the decision-makers at Paramount Pictures that SNL buffs will embrace anything. As a result, director Steve Barron was allowed to consume mass quantities of money in the making of Coneheads, the story of two invaders from the planet Remulak marooned in suburbia. Reprising the roles they originated during the 1976-77 television season are Dan Aykroyd and Jane Curtin. They are Beldar and Prymaat and they must adjust to the fact that rescue is at least seven zerls (15.19 years) away.
The situation is complicated when the genetobonded aliens become immediate progenitors of a female young one. Facing up to the responsibilities of parental unithood, they acquire a dwelling structure in a New Jersey housing tract.
Despite a tendency to look, walk and talk funny, the tall-skulled family is accepted into the community. Their daughter Connie (Michelle Burke) becomes a cheerleader at the local high school and the swim team's best hope for a championship.
A variation on the Munsters approach to domestic comedy, the Coneheads made their debut the same year as Nicholas Roeg's theatrical feature The Man Who Fell to Earth (1976). In the mid-1970s, friendly aliens loomed large in mass market entertainment.
Today, the Coneheads feature turns on the fact that the Remulakians are illegal aliens. Their presence in America becomes the obsession of dedicated Immigration and Naturalization officer Gorman Seedling (Michael McKean) and his Eddie Haskell-like aide Eli Turnbull (David Spade).
Barron, who directed the first Teenage Mutant Ninja Turtle feature, is no stranger to make-up effects movies. Here, he must further contend with a script that trades exclusively in the sort of exaggeration humour that delights little kids and childish adults.
There is nothing intrinsically funny in bald heads or awkward cultural assimilation. There is not a lot of wit in calling a bathroom a "hygienic chamber," an egg "a chicken embryo" or a hooker a "flarthag."
It's just a lot of silly stuff. Though the screenwriting committee goes to great lengths to suggest that the comedy is rooted in the immigrant experience, there is hardly enough in the original characters to carry a television skit, let alone a feature.
To make it feel more like a movie, the producers provided enough budget for a trip to the Coneheads' home planet. The set decorators and special effects guys must have had a ball creating the jewel of the Cone Nebula with what looks like a cast of thousands.
Too bad it's all so massively inconsequential. Overblown rather than funny, Coneheads may be the biggest waste of time and money since Mel Brooks dropped that great intergalactic stink bomb, Spaceballs.

AFTERWORD: Arguably the longest-running network television show in the U.S., Saturday Night Live first went to air in October, 1975 and is now in its 39th season. It's creator, the Toronto-born Lorne Michaels, learned his craft working at CBC Radio. Together with his then-wife, comedy writer Rosie Shuster (the daughter of Canadian comic icon Frank Shuster), he brought a new comic sensibility to late-night television. Among the Canadians who accompanied Michaels to New York were composer Howard Shore, SNL's original music director, and comedian Dan Aykroyd.