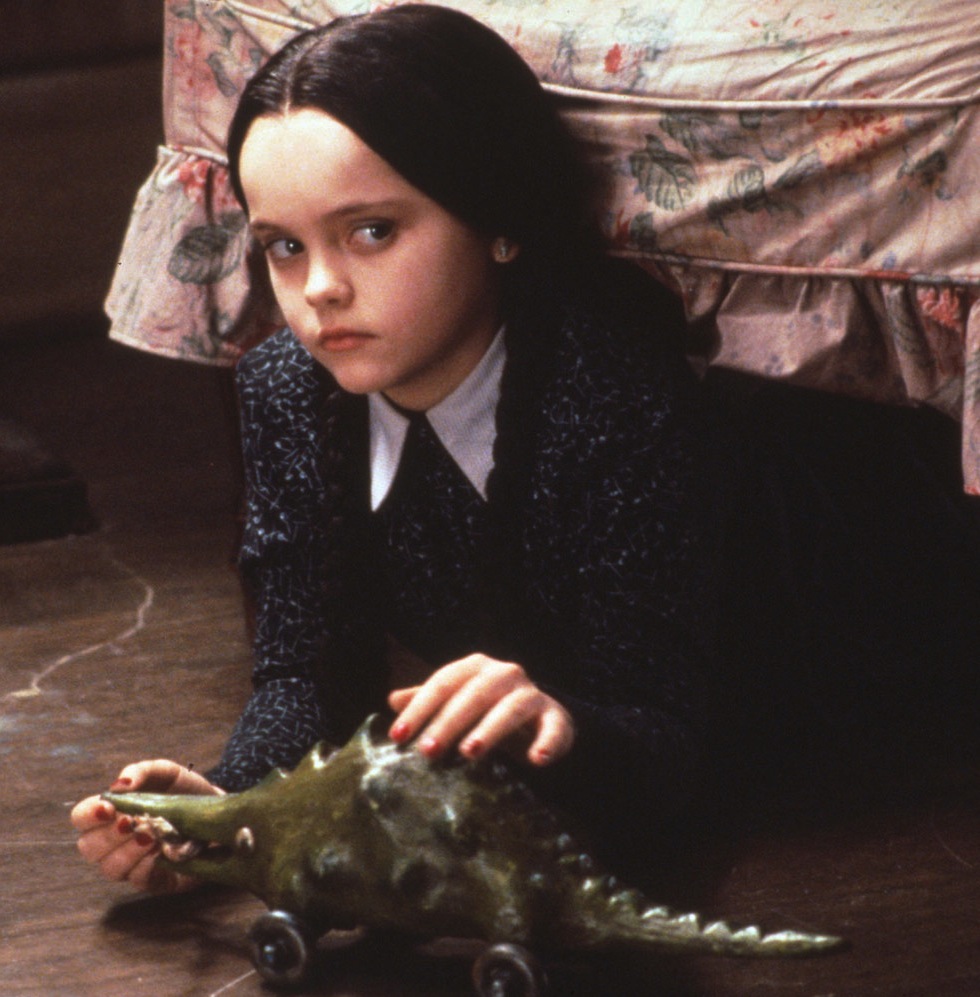 Cast in the role of the sepulchral Wednesday Addams, Christina Ricci established herself as American cinema's future dark star.


Yes, the feature film was based on a mid-sixties TV series, but that show's developer, David Levy, took his inspiration from the Charles Addams cartoons that began running in the New Yorker in 1938.

Thursday, November 21, 1991.
THE ADDAMS FAMILY. Written by Caroline Thompson and Larry Wilson. Based on the characters created by Charles Addams. [ABC-TV series: 1964-66] Music by Marc Shaiman. Directed by Barry Sonnenfeld. Running time: 99 minutes. Rated Mature with the warning "may frighten very young children." HAS IT REALLY been 25 years?
Seems more like 50. Don't they know that The Addams Family was a pre-war comic artifact?.
During the 1930s and 1940s, the macabre wit of magazine cartoonist Charles Samuel Addams was considered offbeat, mildly outrageous and terribly sophisticated. Dealing in black humour that skewered traditional family values, he was beloved by smart-set New Yorker readers.
It was 25 years ago that Fester disappeared. So says his brother Gomez (Raul Julia) at the beginning of director Barry Sonnenfeld's The Addams Family feature film.
And that recalls 1966, otherwise known as the final year of The Addams Family as a prime time television series. For two seasons, the monster clan's domestic life was mass marketed as situation comedy.
Nor was it the only entertainment choice for inversion humour fans. During the same two seasons, The Munsters lived just down the block.
In the 1960s, horror was a pop art form. Need I point out that both shows debuted just 11 months after the first Kennedy assassination?
Watching Sonnenfeld's visually impressive feature, I hoped that it had some point of its own, some compelling reason for exhuming the Addams cartoon albums, leafing through the 1,300 single panel gags and stringing a selection of them together on screen.
The cast promised much. Actor Julia is full of exotic, erotic energy as Gomez, and we could hardly have asked for a better Morticia than Anjelica Huston.
The storyline, straight from the well-worn Disney book of suspense-comedy plots, turns on the return of Fester, who just may be an imposter named Gordon Craven (another bravura performance from Christopher Lloyd).
I hoped that Tim Burton collaborators Caroline (Edward Scissorhands) Thompson and Larry (Beetlejuice) Wilson had found something in this old joke collection to justify all the expensive set decoration.
But, no. It really is little more than a once-amusing concept now well past its prime.
Weird families have become a glut on the market. Weird kids are everywhere you look (although actress Winona Ryder seems to have the movie market cornered).
Indeed, Sonnenfeld's film reminded me of Mermaids, the deliberately off-centre domestic comedy seen here last year. No surprise, then, that the funniest character in his picture is the sepulchral daughter Wednesday, played by Christina Ricci (Ryder's kid sister Kate in Mermaids).
Self-contained and other-worldly, Ricci's Wednesday comes closest to producing the nasty comic shivers that were artist Addams's stock-in-trade.
Overall, though, The Addams Family is an underfunny, unnecessary shaggy lizard story.

AFTERWORD: Christina Ricci, who made her screen debut the year before opposite Winona Ryder and Cher in the single mom rom-com Mermaids (1990), reprised her Wednesday Addams role two years later in Addams Family Values (1993). Born in 1980, her other-worldly quality served to beguile Casper, in the 1995 live-action feature about "the friendly ghost." As a young adult she demonstrated a maturity and fearlessness in her choice of roles, working with such visionary directors as Ang Lee (The Ice Storm; 1997), Terry Gilliam (Fear and Loathing in Las Vegas; 1998), John Waters (Pecker; 1998) and Tim Burton (Sleepy Hollow; 1999). The fact that she's never been nominated for an Oscar — her performance opposite Samuel L. Jackson in the 2006 indie feature Black Snake Moan was typically brave and electrifying — just shows how inadequate the industry's awards process is.