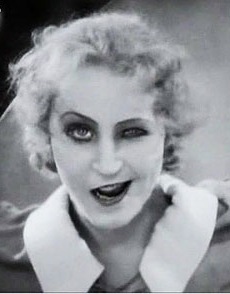 In a clip from Fritz Lang's 1926 feature Metropolis, the Robotrix Maria (Brigitte Helm) comments on director Diane Keaton's question "is there sex in Heaven?"


Facing the question of sex after death


With the annual orgy of movie award shows looming on the horizon, the issue of women's place in the Hollywood kitchen has been raised again on the pages of the New York Times. In a December 28 feature, film critic Manohla Dargis used the recent announcement that Warner Bros. has hired Vancouver-born Michelle MacLaren to direct its 2017 Wonder Woman feature. Pointing out that MacLaren was the first woman to be put in charge on a major superhero project, Dargis went on to decry the overall lack of progress for female artists in "a conservative, fear-driven industry that recycles the same genres, stereotypes and impoverished ideas year after year." Reading her piece, I wondered how the career trajectory of the multi-talented Diane Keaton might have been different in the absence of male bias. Best known as an actress — with five Oscar nominations and one win (for 1977's Annie Hall) — her name is generally linked with those of her directorial paramours Woody Allen (who considered her his "muse") and Warren Beatty. Even so, her anthem seems to have been the song she belted out with Bette Midler and Goldie Hawn in the 1996 feature First Wives Club: "You Don't Own Me." Celebrating her 69th birthday today (January 5), Diane Keaton began accumulating credits as a producer after making her directorial debut with the 1987 documentary feature Heaven.

Wednesday, February 10, 1988.
HEAVEN. Music by Howard Shore. Written and directed by Diane Keaton. Running time: 80 minutes. Rated Mature with the B.C. Classifier's warning: not suitable for children; some violence, very coarse language. LIFE WITH ALVIE ISN'T easy. As played by Woody Allen in his memoir-comedy Annie Hall, Alvie Singer is a serious wimp.
Poor Annie. As played by Diane Keaton, she is fresh from the Midwest, and discovering that life in Alvie's big city is an endless round of art films and angst, with the self-absorbed little guy constantly kvetching about love and death.
Life with Woody must have had its moments. As an actress, Keaton played opposite actor-playwright Allen in both stage and screen versions of his Play It Again, Sam (1972).
She starred opposite Allen, the screenwriter-director, in his comic films Sleeper (1973) and Love and Death (1975). Their off-screen relationship inspired him to create the Oscar-winning romantic monologue Annie Hall (1977).
Turnabout is fair play. With Heaven, her debut as a feature film director, Diane Keaton offers Annie's response to Alvie's obsession with his own mortality.
A perky, pseudo-serious examination of American attitudes about the afterlife, it combines kitschy archival footage with quirky studio interviews. With mock gravity, her picture poses such questions as "what is heaven?" and  "how do you get to heaven?" and the Alvie Singer special, "are you afraid to die?"
It's Annie's message to Alvie: "Lighten up."
Interviewed are a cross-section of citizens, including atheists, believers, street-corner preachers, flakes, fundamentalists, children and members of Keaton's immediate family.
Each participant states his or her views on a studio set criss-crossed with shadows that give it an otherworldly, occasionally spooky look. Their responses are punctuated with vintage movie moments selected to demonstrate the deadly seriousness and utter risibilty of it all.
"Is There Sex in Heaven?"
Here's a clip of Brigitte Helm, the Robotrix from Metropolis (1926) in her lustful Maria disguise, taking a step towards the camera and winking.
Here's a complementary shot of rotund John Lipson, winged and helmeted as Vultan, king of the Hawkmen, as he takes a step towards the camera in the 1936 Flash Gordon serial.
The characters are edited together in a kind of mating dance that Keaton has set to Henry Mancini's brassy Peter Gunn theme. Is there sex in heaven, Alvie?
Brigitte winks, and winks and winks.
An airy, inconsequential documentary, Heaven offers mysticism with a light, musical rhythm.

Afterword: Another song that the Los Angeles-born Diane Keaton might claim as her own: Paul Anka's "My Way" (1969). Never married, she went her own way from the start, which happened to be a singing/dancing role in the original 1968 Broadway production of Hair. The 22-year-old Keaton distinguished herself by not undressing for the rock musical's controversial mass nude scene. In 2003, as Jack Nicholson's co-star in the romantic comedy Something's Gotta Give, the 57-year-old Keaton did a brief, full-frontal nude scene "to be honorable to the movie." Last May, Guardian correspondent Emma Brockes speculated that she "has probably made more money from selling properties in L.A. than from acting," a reference to Keaton's lesser-known career as a real-estate developer. Keaton will be heard from next as the voice of Dory's mother, Jenny, in Pixar's 2016 animated feature Finding Dory (billed as the sequel to 2003's Finding Nemo).