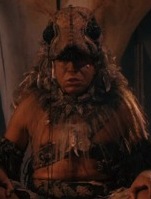 Lord of the locusts


Among the ideas being dusted off to explain the Charlie Hebdo murders is Harvard professor Sam Huntington's "Clash of Civilizations" theory. The subject of a 1992 lecture and 1996 book, it argues that religious identity is at the root of global conflicts in the post-Cold War World, and it is currently being used to frame the January 7 shootings as part of an epic struggle between primitive Islam and post-Enlightenment Judeo-Christianity. More of a distraction than an explanation, Huntington's unhelpful generalizations are particularly attractive to infotainment commentators whose world view requires good guys, bad guys and a minimum of context. No surprise, then, that culture-clash themes are also popular among filmmakers, and are at the heart of some of the best films directed by British producer-director John Boorman. Born on this day (January 18) in 1933, Boorman came to prominence in Hollywood for his Oscar-nominated tale of urbanites versus hillbillies, Deliverance (1972). Later, he challenged audiences with 1981's Excalibur, in which Arthurian myth is interpreted as a battle between Christianity and the old Magic of the Land, and 1985's The Emerald Forest, in which an Amazonian tribe's traditions are threatened by a hydroelectric dam development. Less successful was his 1977 attempt to illustrate a clash between faith and science, Exorcist II: The Heretic.

Saturday, July 2, 1977
EXORCIST II: THE HERETIC. Written by William Goodhart. Music by Ennio Morricone. Directed by John Boorman. Running time: 118 minutes. Restricted entertainment with the B.C. Classifier's warning: many frightening scenes. FIRST LET ME TELL YOU about Howard the Duck. Howard, a duck drawn very  much in the style of Walt Disney's Donald, is the star of his own monthly magazine. His is, by far, the most popular new comic book title since Spider-Man.
In Issue 11 (April, 1977), he was on a bus and suffering from the effects of a nervous breakdown (Like Superman, Howard arrived on Earth against his will. A non-human in a human world, he is obviously under a lot of pressure.)
Howard's seatmate on this bus is a wide-eyed young woman. She introduces herself thusly: "My name is Winda. Hi! My parents say I'm possessed by the devil. I'm on my way to Cwevewand to be exorcised."
I recalled Howard's trip to "Cwevewand" during a particularly silly moment in Exorcist II: The Heretic. Regan MacNeil (Winda . . . er, Linda Blair) is now 16 and an outpatient at a very expensive-looking New York psychiatric clinic.
Regan has just been asked by a fellow patient why she comes to the clinic. "Oh," she says with a cheerful smile. "I was possessed by a demon."
If there was any more to her speech, it was drowned out by the laughter in the theatre auditorium. It's unwelcome mirth, though. Unlike Howard the Duck, director John Boorman's sequel to 1973's The Exorcist is not supposed to be funny.
Screenwriter William Goodhart started with an interesting premise. Since the death of Father Lankester Merrin (Max von Sydow) in the earlier film, his ideas have become controversial. It is even suggested that the elderly Jesuit priest, who battled Regan's demon, might have been guilty of heresy.
The new film has Father Philip Lamont (Richard Burton), a priest full of self-doubt, being sent to investigate Merrin's last exorcism. In developing his story, Goodhart attempted to bring together some exciting new religious and scientific concepts.
From the real life Jesuit philosopher Pierre Teilhard de Chardin, he borrowed the idea that man is an incomplete being, still evolving towards a oneness with his God. From science, he adopted the as-yet little-known technique of synchronized hypnosis.
What he wants to tell us is that Merrin (and, I suppose, Father Damien Karras, an Exorcist principal character who is never mentioned in the new film) helped Regan to beat the devil. In doing so, she gained a leg up the evolutionary ladder. She has become a new and better being.
This is all supposed to come out in the story. Unfortunately, filmgoers are going to be much too busy laughing at the unintentional jokes to pay much attention to the philosophical discussion. Goodhart's script is just too obscure, Boorman's direction too distracted and the cast all too aware of the dramatic disaster in which they are involved.
Actress Louise Fletcher, who won an Academy Award for her portrayal of the  authoritarian psychiatric nurse in One Flew Over the Cuckoo's Nest (1975), plays Doctor Gene Tuskin, the psychiatrist treating Regan. Instead of creating a new character, Fletcher takes cover in her Nurse Ratched persona. In doing so, she turns her best performance into her worst.
"Do you realize what you're up against?" asks the wild-eyed Father Lamont during one of their early encounters.
"What am I up against?" Tuskin counters flatly.
Now Lamont's sonorous voice threatens to slip into foamy-mouthed raving.
"EVIL!"
"What we're up against," says Tuskin with studied detachment, "is mental illness."
It is Tuskin who puts Lamont and Regan together in the synchronized hypnosis experiment. So linked, they meet Pazuzu, the locust demon that a young Father Merrin once exorcised from an African child named Kokumo (Joey Green).
After reporting to Rome, Lamont wings off to Africa to seek out the adult  Kokumo (James Earl Jones).
So far in the film we have seen Burton chew the carpet shamelessly, Fletcher sleepwalk and Blair demonstrate that her negligible growth as an actress has been offset by some spectacular growth as a female. Indeed, if there was a Lynda (Wonder Woman) Carter look-alike contest, Blair would be the boo . . . er, shoo-in winner.
None of this, however, can adequately prepare us for the arrival of Jones. At just about the time we're sure that things can't get any sillier — did I mention Ecumenical Edwards (Ned Beatty), dealer in cross-cultural religious relics? — Jones makes his entrance as the adult Kokumo.
He's dressed as a giant locust.
Lamont looks at him, and he finally comprehends. This is a job, not for a Jesuit priest, but for Spider-Man.
Indeed, if there is one good thing about Exorcist II: The Heretic, it is the almost ironclad guarantee that we'll never have to see an Exorcist III.

Afterword: Got that one wrong. As noted in my afterword to The Exorcist, screenwriter William Peter Blatty went on to create his own The Exorcist III (1990), which does its best to ignore the existence of Boorman's sequel. Filmgoers and critics alike hated the 1977 picture, and it's remembered on numerous lists of the worst films of all time. In 1999, Boorman told interviewer Bob McCabe that "the sin I committed was not giving the audience what it wanted in terms of horror." In attempting to introduce the ideas of Pierre Teilhard de Chardin, auteur Boorman violated the first rule of sequels: Give them another one just like the other one. His career recovered, and ten years later he was a triple Oscar nominee (best picture, director and screenplay) for his child's-eye view of the Second World War, Hope and Glory (1987). As for Howard the Duck, he got his screen moment in 1986. Though the comic book was classic, the Willard Huyck-directed feature film was less so, finding itself on many of the same worst-films-of-all-time lists as Exorcist II.