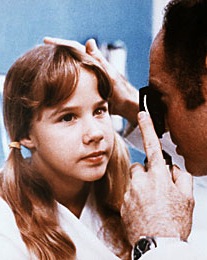 When science fails to explain why 12-year-old Regan MacNeil (Linda Blair) is having convulsions, her terrified mother calls upon The Exorcist (1973).


Scaring up the old time religion


Environmental activism has a powerful new advocate. According to published reports, Pope Francis is preparing an encyclical — a letter setting out papal policy — on the subject of climate change. The leader of the world's 1.2 billion Cathollcs, Francis's plans for 2015 also include convening a meeting of faith leaders to discuss the issue, and a speech to the United Nations General Assembly, both prior to December's U.N. Climate Change Conference in Paris. A papal spokesman said that Francis will bring leaders of the main religions together “to make all people aware of the state of our climate and the tragedy of social exclusion.” All of this has self-defined "conservative Catholics" in an uproar. They find Francis's relative lack of interest in their issues — opposing abortion, contraception and homosexuality — deeply troubling. It also puts in doubt the fate of Catholic layman William Peter Blatty's 2014 petition to Rome's Congregation for Catholic Education demanding that it strip Georgetown University of the right to call itself "Catholic and Jesuit." The Oscar-winning writer is concerned that his alma mater has strayed from his version of the old time religion. Blatty, born on this day (January 7) in 1928, defined his faith in a novel that he adapted into a screenplay for director William Friedkin, The Exorcist (1973).

Wednesday, December 26, 1973.
THE EXORCIST. Written by William Peter Blatty, based on his 1971 novel. Music editing by Gene Marks, with additional music by Jack Nitzsche. Directed by William Friedkin. Running time: 122 minutes. Restricted entertainment with the B.C. Classifier's warning: a very frightening picture; some extremely coarse language. IF YOU THINK ABOUT it for a moment, the devil has enjoyed pretty good press lately. His image in recent months has been considerably better than that of , say, the U.S. president [Richard Nixon].
Movies like The Mephisto Waltz (1971), and a recent made-for-TV comedy called Poor Devil (1973), suggest that Old Nick is little more than a supernaturally shrewd businessman, constantly striking bargains in an effort to improve the profit picture for Hell, Inc.
He is not without compassion, though. In the phenomenally successful porno film The Devil in Miss Jones (1973), he even allows one of the damned a leave of absence to get in some last minute sinning.
In 1968's Rosemary's Baby, he was shown to have strong paternal feelings. Later, in another made-for-TV effort called The Devil's Daughter (1973), he even finds time to attend his human child's wedding. He's there to give away the bride.
It's been a long time since Satan, the Christian personification of evil, has looked particularly evil. That, in part, accounts for the unexpected impact of director William Friedkin's The Exorcist, a film likely to cause the worst nightmares I'll ever have.
Based on William Peter Blatty's best-selling novel, and shot from his own screenplay, The Exorcist is the story of a demonic possession. Oscar-winner Friedkln (1971's The French Connection) has turned it into one of the most terrifying films ever made.
The story begins in northern Iraq, where Father Merrin (Max von Sydow), an elderly archeologist who also happens to be a Roman Catholic priest, opens a long-sealed tomb and inadvertently liberates a demon. The scene immediately shifts to Georgetown, Maryland, where film star Chris MacNeil (Ellen Burstyn) is making a movie on the university campus.
With her is her 12-year-old daughter Regan (Linda Blair), within whom the malignant demon chooses to reside. When medical science can provide no answers for the terrible convulsions that seize the child, her mother calls upon psychiatrist/priest Father Damien Karras (Jason Miller) to perform the ancient Catholic ritual of exorcism.
In the construction of his film, director Friedkin  leaves no doubt that the age of the sclentist-hero, stalwart  proponent of the "logical" explanation, is at an end. When the  terrified mother explains to a doctor that she has seen  not only her daughter, but her daughter's bed in convulsion, the thick-headed physician tells her that "the problem is not your daughter's bed, it's her brain."
The medical men, ensconced in their glass and stainless steel towers, diagnose a lesion in the temporal lobe. Unfortunately, their X-rays fail to provide any corroborating evidence. With what amounts to disdain, another physician recommends exorcism.
"The Catholics keep it in the closet," he says. "It's sort of an embarrassment. It has worked, but not for the reasons they think."
By contrast to the cloistered scientists, the priests are shown as men who are in and of the real world. Karras, psychiatrist to his fellow priests, is a man enduring a crisis of faith, made all the more serious by the death of his mother in a New York slum.
"If you weren't a priest," his aging uncle told him earlier, as his mother languished in a rundown public hospital ward, "you'd be a famous psychiatrist by now. Your mother would live in a penthouse instead of like this."
In his original novel, Blatty never completely closed the door on science's logical explanation. Friedkin, however, slams it tight. His film puts us in the presence of an actual demon, and makes it the most disgusting, repulsive and obscene personification of evil that a screen has ever held.
The child is transformed (with the aid of  superb makeup from Dick Smith and some unnerving special effects by Marcel Vercoutere) into a deep-voiced fiend capable of unearthly screams, hideous, wanton looks and shockingly unnatural acts.
To his credit as a filmmaker (and the discomfort of his audience), Friedkin has put it all on film to numbing effect.
In its depiction of utter evil, The Exorcist is without rival.   A film filled with fine performances, it leaves its audience too shocked and scared to think about its minor dramatic shortcomings. It's a movie that really manages to give the devil his due.
*     *     *
SHIRLEY? SURELY NOT — Don't be surprised if the character of Chris MacNeil in The Exorcist seems an awful lot like actress Shirley MacLaine. In developing his novel, author Blatty patterned her character after that of his real-life friend and her daughter.
The story itself was inspired  by an actual 1949 incident that involved a 14-year-old boy, rather than a girl. Co-incidentally, MacLaine was seen this past year [1972] in a film called The Possession of Joel Delaney. In it, she played a woman whose younger brother is possessed by the malignant spirit of a dead friend.

Afterword: In late 1973, with the Watergate scandal dominating the headlines, movie audiences were ready for the encounter with pure evil that The Exorcist delivered. The year's box-office champion, it received 10 Oscar nominations, winning two awards (William Peter Blatty, for his screenplay, and the sound men, for making people's skin crawl). Although both went on to do many other things, the shock feature was the career highlight for both Blatty and director William Friedkin. As is often the case with surprise successes, The Exorcist spawned a series of films, including director John Boorman's  quirky/creepy sequel, Exorcist II: The Heretic (1977) and director Blatty's attempt to ignore Boorman's picture, The Exorcist III (1990). The new century brought Exorcist: The Beginning (2004), directed by Renny Harlin, and Dominion: Prequel to the Exorcist (2005), which was a previously shelved version of the 2004 film, directed by Paul Schrader.
For veteran Swedish actor Max von Sydow, playing Father Merrin (in the first two Exorcist features) was just one of many memorable roles in a 60-years-plus career. He had previously played Jesus Christ (in the 1965 remake of The Greatest Story Ever Told), and later starred as Leland Gaunt, Stephen King's personification of the devil (in director Fraser Heston's filmed-in-Vancouver adaptation of Needful Things). For pre-teen actress Linda Blair, playing Regan MacNeil (in the first two Exorcist features) turned the rest of her career into a footnote. She became typecast as a "scream queen," with performances that earned her six "worst actress" Golden Raspberry Award nominations (with four wins). In 1990, she co-starred with Leslie Nielsen in the frenetic horror comedy Repossessed, spoofing her own greatest hit.

See also: By co-incidence, William Peter Blatty shares his January 7 birthdate with Charles Addams (1912-1988), the cartoonist who domesticated the macabre so effectively during his many years at the New Yorker magazine. His vision was brought to the screen in director Barry Sonnenfeld's 1991 feature The Addams Family.