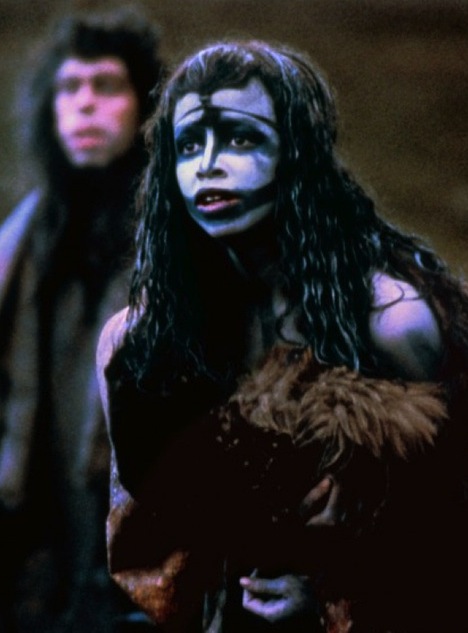 
Celebrating her 53rd birthday today (Feb. 28), actress Rae Dawn Chong became an international star speaking a language not heard before. As cavewoman Ika, she communicates some game-changing truths to prehistoric adventurers engaged in a Quest for Fire (1981).

Wednesday, March 10, 1982.
QUEST FOR FIRE (original title: La Guerre de feu). Written by Gerard Brach, based on the novel by J.H. Rosny, Sr. Music by Philippe Sarde. Directed by Jean-Jacques Annaud. Running time: 100 minutes. Restricted entertainment with the B.C. Classifier's warning: frequent violence, some nudity and sex. YOU DON'T HAVE TO take Quest for Fire seriously. Full of old jokes and knock-about humour, it's a movie that will appeal to kids and comedy buffs, a sort of Three Stooges Meet the Cavewoman.
It is possible, though, to take a deeper view. The product of much thought and research, Quest for Fire is a unique contemplation on the origins of man, a picture that offers both a dramatic and an educational experience.
Clever, clever Jean-Jacques Annaud. The Paris-based director has become an expert in having his cake and eating it, too.
Remember the 1976 Academy Awards? When they opened the envelope marked "foreign language best picture," the winner was an off-beat item from Africa's Ivory Coast, a modest little movie called Black and White in Color.
Filmed as La Victoire en Chantant, the picture was former-TV commercial-maker Annaud's debut feature. The Oscar win was a major upset — the competition included such commercially successful items as Italy's Seven Beauties and France's Cousin, Cousine — and it established the young Frenchman as a world-class contender.
A becoming balance of ambition and modesty, Black and White was a sly satire, brimming over with forceful commentary on war, peace, patriotism, race and religion. It demonstrated the director's ability to make a movie work on several levels at once.
Quest for Fire manages the same trick. Multi-layered, the picture is designed as a conversation piece. A prehistoric unlike any previous prehistoric, the movie may already be required viewing among the with-it and the fantasy faddists.
Its more serious embellishments — these include a primitive language created for the occasion by novelist Anthony (Clockwork Orange) Burgess and a complete vocabulary of complementary physical gestures devised by behavioural theorist Desmond (The Naked Ape) Morris — are likely to generate repeat business at the box office as filmgoers return to pick up bits missed the first time through.
The storyline is simple enough. Set deep in man's possible past — an opening title establishes the time as 80,000 years ago — the film introduces us to the cave-dwelling Ulam, described in the production notes as "primitive homo sapiens."
Although the Ulam know how to use fire, they're unable to make it. In order to have any at all, they must keep a small source fire going at all times.
The film opens with the Ulam being attacked by the more apelike Wagabon, described as "plundering Neanderthals," and losing their precious source fire. Routed, the Ulam regroup on a small island.
The problem is discussed and three of the tribe's heroes, Naoh (Everett McGill), Amoukar (Ron Perlman) and Gaw (Nameer El-Kadi), embark on a vital mission, the Quest for Fire.
During their journey the Ulam heroes will cover a lot of ground — among the filming locations for this Franco-Canadian co-production were Kenya's Tsava National Park, Glencoe in Scotland, Ontario's Bruce Peninsula, the Alberta Badlands and Cathedral Grove here in B.C. — and encounter a number of hostile tribes.
The most terrifying are the Kzamm, described as "cannibals." The most awe-inspiring are the Ivaka, the first true "homo sapiens."
No, I didn't pick up all those names during my first viewing of the film. Because Quest for Fire is rather like a foreign-language film without subtitles, I decided to look at it as I would a silent movie, paying attention to the visuals and the music, while attempting to follow the storyline.
Early on, our heroes are treed by a pair of sabre-toothed lions. The sequence is pure slapstick, and I began thinking of the trio as Curly, Larry and Moe.
Characterize the picture as a comedy, and it's easy to enjoy the fearsome wooly mammoths — a herd of expensively costumed Asian circus elephants — as friendly snuffle-upagi just in from Sesame Street. The primitives' wham-bam attitude to sex becomes a running gag.
There is more to it, though. When the Ulam inadvertently save Ika (Rae Dawn Chong), an Ivaka woman, from the Kzamm, they make a friend of inestimable value. Not just another pretty face, Ika is of a tribe that has mastered the manufacture of fire.
Unlike past prehistorics — films such as One Million Years B.C. (1966) and this year's Caveman [1981] come to mind — Quest for Fire has worked hard to maintain authenticity in its characters and setting. No dinosaurs roam this world, only ideas and incidents with some basis in established science.
One striking example is Annaud's treatment of sex. In an article written for the Nov./Dec. 1980 issue of Science Digest, evolutionary biologist Robert Claibourne discussed the importance of eye contact in sexual relationships.
According to the evidence, it was not until primitive man adopted the face-to-face position that he gained the capacity for feelings, emotion and true sexual love. Claibourne cites pages of scholarly argument to support his thesis.
Annaud, in an eloquently simple variation on the theme, has Ika resist Naoh's unthinking, monkey-like approach. She turns to face him, and in their eyes there is the first glimmering of something that's destined to cause old homo sap a whole lot of problems.
Intelligence. Ika has it, and so does Quest for Fire. Whether viewed for laughs, or for its deliberately thought-provoking content, the picture is an unmatched experience in its 70mm, stereophonic sound version.
Restricted — a rather too harsh classification — with the warning "frequent violence, some nudity and sex," Quest for Fire is on view at the Stanley Theatre.

Afterword: Edmonton-born Rae Dawn Chong is a one-woman celebration of Canadian diversity. As daughter of actor/director Tommy Chong (of Cheech and Chong), she is of Chinese, Scots-Irish and French descent. Her maternal heritage is Afro-Canadian and Cherokee First Nations. To date, she's accumulated more than 40 feature film credits, in addition to her TV work. Among the ones most often noted are her co-starring roles opposite Arnold Schwarzenegger (Commando;1985); C.Thomas Howell (whom she married after Soul Man; 1986); and Mick Jagger (Running Out of Luck; 1987), as well as her supporting role in Steven Spielberg's Oscar-winning The Color Purple (1985). Since making her feature film debut at the age of 17 (in 1987's Stony Island), she's worked steadily, often returning to Vancouver, where she has starred in seven theatrical and three made-for-TV features. Diehard sci-fi aficionados recall her co-starring role opposite Star Wars' Mark Hamill in 1999's Time Runner, and with Willie Nelson in the New Age fantasy Starlight (1996), as well as her guest-starring roles in episodes of locally-shot TV series Outer Limits, Highlander and Poltergeist. From 2000 to 2002, she played the Scully-like Dr. Peggy Fowler to Adrian Pasdar's true-believing Declan Dunn in the CTV/NBC fantasy series Mysterious Ways. Outspoken and at times controversial, Rae Dawn Chong continues to add titles to an eclectic filmography.