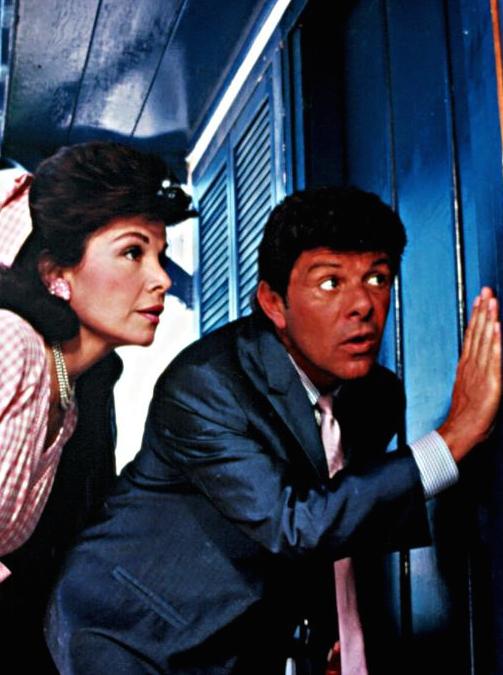 All grown up, Annette (Annette Funicello) and her husband (Frankie Avalon) return to the scene of their many teen memories in director Lyndall Hobbs’s 1987 musical comedy Back to the Beach.


Never too old for a seashore shindig


On this day (July 5) in 1946, Parisian lingerie designer Louis Réard introduced a two-piece, navel-baring swimsuit he called the bikini. There is no evidence that Annette Funicello ever wore anything really itsy bitsy, and certainly not in her 1987 trip Back to the Beach.

BACK TO THE BEACH. Written by Peter Krikes, Steve Meerson and Christopher Thompson, based on a story by James Komack, B.W.L. Norton and Bruce Kirschbaum. Music by Steve Dorff. Directed by Lyndall Hobbs. Running time: 92 minutes: Rated General with the B.C. Classifier’s warning: occasional coarse language. ANNETTE (ANNETTE FUNICELLO) GOT married. It happened 22 years ago, right after The Big Kahuna (Frankie Avalon) wiped out attempting to ride the "humongous cowabunga from down unda."
Unlike Peggy Sue, she has no regrets, no doubts and no uncertainties. Her husband, once a legendary Pacific Coast surfer, is now the owner of the biggest Ford dealership in Ohio.
He may suffer from stress-related anxieties but Annette is, well, Annette, the all-American good girl grown into happily-ever-after womanhood.
Together with her husband and their rebellious 12-year-old son Bobby (Demian Slade, affecting an Erick Von Zipper look), she's setting off on a Hawaiian vacation. There'll be just enough time during their Los Angeles stopover to look in on her college-age daughter Sandi (Lori Loughlin).
When actress Funicello married,  an era ended. It was 22 years ago [1965], after the birth of her first child, that the Mouseketeer-turned-teen movie queen decided to wind down her career and concentrate on being a wife and mother.
In all, she appeared in 14 features, making her major impact in a series of swim-wear musicals directed by William Asher.
Together with Franke Avalon she co-starred in five "Asher splashers” — 1963’s Beach Party, Muscle Beach Party (1964), Bikini Beach (1964), Beach Blanket Bingo (1965) and How to Stuff a Wild Bikini (1965).
Annette was good girl Dolores (or "Dee Dee”), while Avalon kept his own name, playing her fun-loving boyfriend Frankie.
Ah, nostalgia! Just when you thought you couldn't go home again, along come a pair of middle-aged teeny-boppers to take us Back to the Beach.
Bright and bouncy, their self-mocking screen reunion offers a tidal wave of good old-fashioned summer fun. Well, maybe not entirely old-fashioned.
Here, the plot turns on dad's reaction to the fact that daughter Sandi is sharing her beach shack with a surfer hunk named Michael (Tommy Hinkley). Mom's moment comes when they visit Daddy-O's Bar and discover that the owner, a former beach bunny named Connie (Connie Stevens), maintains a public shrine to the memory of The Big Kahuna.
Before the evening's over, both couples are splitsville. For the rest of the picture, the parental persons advise their younger counterparts on the finer points of making up in sand city.
Partnered as executive producers, Avalon, 48, and Funicello, 44, have created an entertainment with plenty of appeal for both the over-40s and the under-12s. Making her feature film debut, Australian-born director Lyndall Hobbs manages to re-create the exuberant, mindlessly inconsequential charm of their well-remembered series, and delivers it to the screen with 1980s energy.
Sweet-tempered and triumphantly trivial, Back to the Beach is for those inclined to forget Madonna and reconnect with Annette.

Afterword: Building on her career as a British television host and documentary director, Australian-born Lyndall Hobbs relocated to Hollywood in the early 1980s. Her success directing music videos earned her the Back to the Beach assignment, now remembered as her only feature film. The picture provided fans of vintage U.S. TV with with the opportunity to see such performers as Barbara Billingsley, Tony Dow and Jerry Mathers (the Leave It to Beaver family), Bob Denver and Alan Hale, Jr. (Gilligan’s Island), Edd Byrnes (77 Sunset Strip), Don Adams (Get Smart) and Paul Reubens (aka Pee-Wee Herman) in cameo roles.
And yes, according to the Internet’s National Day Calendar website, there is a National Bikini Day. There, we’re reminded that Louis Réard’s contribution to beach fashion was named for the South Pacific’s Bikini Atoll, the site of U.S. nuclear weapons tests from 1946 to 1954. Noting the celebration in a 2018 article headlined “A scandalous, two-piece history of the bikini,” Washington Post reporter Steve Hendrix explains that Louis Réard’s innovation was not to divide a woman’s swimsuit into two parts, but to do so in a way that exposed her navel.
At first the subject of condemnation and government bans, bikinis inevitably found their way into the popular culture. They quickly became a staple of the glamour photography model’s wardrobe. By 1960, the year that Brian Hyland’s novelty tune Itsy Bitsy Teenie Weenie Yellow Polkadot Bikini hit No. 1 on the pop charts in the U.S., U.K., France and Germany, naked navels were no longer an issue. And, when Annette Funicello first ran down to the sea in 1963’s Beach Party, she wore something very like a bikini, albeit a really, really modest one.
She did so in the five mid-1960s pictures mentioned in the review above, always playing a character named Delores (or Dee Dee), with Frankie Avalon playing her beau Frankie. Those names are never mentioned in Back to the Beach for nasty little legal reasons. All of the previous movies had been made by American International Pictures (AIP), the corporate entity that held the copyright to their content (which included the character names). While Paramount Pictures pictures could reunite the stars, they couldn’t bring back their characters, which is why the screen credits show actress Funicello playing “Annette” and actor Avalon in the role of “Annette’s Husband.”