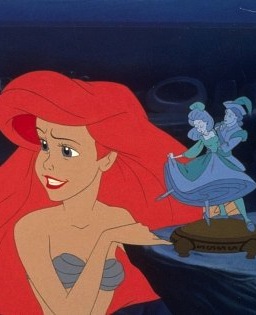 Princess Ariel (Jodi Benson) takes delight in her collection of "neat stuff" from the surface world, in 1989's The Little Mermaid.


Dane's pain lost under the sea


Song of the Sea, one of the five cartoons nominated for the 2015 best animated feature Oscar, tells the story of a selkie. That makes Saoirse, the new film's heroine, a distant cousin of Ariel, the fish-tailed songstress featured in the 1989 Walt Disney release, The Little Mermaid.

Friday, December 15, 1989.
THE LITTLE MERMAID. Based on a story by Hans Christian Andersen. Music by Alan Menken. Co-written and co-directed by John Musker and Ron Clements. Running time: 82 minutes. General entertainment. THEY'VE ELIMINATED THE DANE'S pain. Although the Disney Company's new animated feature The Little Mermaid is "based on the fairy tale by Hans Christian Andersen," the mood and manner of its telling have been changed in an attempt to exploit the innocent.
No Care Bear confectioner, Andersen was a melancholy fabulist, a deeply troubled individual who worked out his personal passions in story form.
"All of what I have written is a reflection of myself," he said. "Every character is from life."
Unrequited love was part of that life. The Little Mermaid was his reaction to Louise Collin, the daughter of his leading benefactor in Copenhagen, Royal Theatre governor Jonas Collin.
First published in 1836, it is the story of the Mer-King's youngest daughter, a princess of the sea who loves unwisely. In Andersen's downbeat tale, she pays a terrible price for the opportunity to walk upon the land, where she hopes to win the heart of a human prince.
Today's animators lack their own master's magic. The crew currently working for Disney know how to make pictures move, but their version of The Little Mermaid is trading on the late Walt Disney's name as much as on Andersen's.
No Saturday morning schlockmeister, the Disney Company's founder was an instinctive storyteller who expanded the possibilities of the cartoon medium and moved it in the direction of art. He succeeded because he knew how to connect with audiences emotionally, while thrilling them visually.
The new guys at the Mouse Works are more into marketing. Written and directed by John Musker and Ron Clements, The Little Mermaid applies the traditional Disney gloss to a hollow, Hanna-Barberic shell.
A bland cartoon remake of Splash, it features a teen queen mer-girl. Ariel (voice of Jodi Benson) looks like Barbie's kid sister Skipper, by way of Ally Sheedy.
Talks like her, too. "Look at all this stuff," she says of her treasure trove of artifacts from the surface world. "Isn't it neat?"
When she spots hunky Prince Eric (Christopher Daniel Barnes) sailing over the bounding main, Ariel flips.
Ignoring the calypso-rhythmed advice of her crab guardian Sebastian (Samuel E. Wright) — "Darling, it's better / Down where it's wetter" — she accepts the help of Ursula (Pat Carroll), the scheming sea witch.
For the price of Ariel's voice — in Andersen's original, the witch cuts out her tongue — the demonic octopus-woman works some deep-sea juju that transforms the mermaid into a leggy beauty. Along with Sebastian, she heads for the surface for her shot at true love.
Elegant animation notwithstanding, this is a film that fails to connect with the imagination. The Musker-Clements team substitutes mechanical craft for creativity, with neither Andersen's inner turmoil nor Disney's honest, Middle-American sentimentality anywhere in evidence.
What remains is advertising art, a package manufactured for promotional tie-ins and product-licensing arrangements.

Afterword: In addition to their mutual marine themes, The Little Mermaid is connected to the current Song of the Sea by its use of what has come to be known as "traditional animation." Cartoon historians note that the 1989 feature was the last Disney production made with hand-painted cels — over a million of them — individually photographed. The 1990s saw the computer come into its own as an animation tool, and feature-length cartoons re-entered the marketplace in a big way. In 2001, Hollywood's Academy of Motion Picture Arts and Sciences added an animated-feature category to its annual Oscar awards show. Cartoon Saloon, a company based in Kilkenny, Ireland, is among the few animation studios to produce its films in the old way, and it made Song of the Sea.
In the absence of an animated feature category for movies in 1989, The Little Mermaid had to be content with two Oscar wins (out of three nominations) in the music categories (original song award to Alan Menken and Howard Ashman for Under the Sea; original score to Alan Menken). Nor did the corporation's head office ignore the marketing opportunities that came with the creation of a new Disney princess. Ariel's early life adventures were detailed in a three-season, 31-episode television series (1992-1994), followed by a pair of direct-to-video features. In The Little Mermaid 2: Return to the Sea (2000), Ariel's daughter discovers her mother's marine origins, and The Little Mermaid: Ariel's Beginnings (2008) offers another prequel tale.