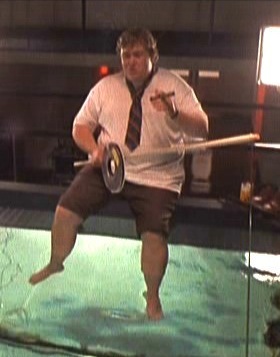 
For a time, he seemed to be everywhere. All the best directors wanted a taste of Candy to sweeten their A-budget projects. Steven Spielberg's Second World War comedy 1941 (1979), John Landis's manic musical Blues Brothers (1980), Frank Oz's shock musical Little Shop of Horrors (1986), Mel Brooks's Star Wars parody Spaceballs (1987), even Oliver Stone's alternative history JFK (1991) — they all feature Canadian comic John Candy in small but showy roles. Candy, born on this day (October 31) in 1950, was part of the creative collective that wrote and performed in the six-season SCTV series (1976-1984). A big man (Candy stood six feet, three inches and weighed in at about 300 lbs.), he used his size to great comic effect. Occasionally, in a film such as Chris Columbus's Only the Lonely (1991), he achieved romantic pathos. He was at his best, though, as a supporting player, in gormless sidekick roles such as Tom Tuttle (opposite Tom Hanks in 1985's Vounteers) or Del Griffith (opposite Steve Martin in 1987's Planes, Trains and Automobiles). Today Reeling Back remembers Candy as Freddie Bauer, his first pairing with Hanks, in director Ron Howard's sweet-tempered mermaid fantasy from 1984, Splash.

Friday, March 16, 1984.
SPLASH. Written by Lowell Ganz, Babaloo Mandel and Bruce Jay Friedman, based on a story by Friedman and Brian Grazer. Music by Lee Holdridge. Directed by Ron Howard. Running time: 111 minutes. Mature entertainment  with the B.C. Classifier's warning: occasional nudity, swearing and suggestive language. BEGONE, DULL CARE. Just when we need a touch of inspired screen insanity, along comes Ron Howard, a young actor-turned-director, to prove that he knows how to make a Splash.
Here's an opening that's pure movie magic. "Cape Cod / 20 Years Ago," reads the identifying title. Aboard the ferry New England Queen, an eight-year-old tourist is staring out to sea.
Suddenly, as if answering a siren call, little Allen Bauer (David Kreps) jumps into the water. Beneath the waves, his hands touch those of a little girl (Shayla MacKarvich), and all is warm and well.
Then comes rescue, and the sepia-toned memory segues into "New York City / This Morning." The adult Allen (Tom Hanks), co-owner of Bauer Produce, is an unhappy man.
As Allen explains to his womanizing older brother Freddie (John Candy), the problem is love. Allen desperately wants to be in love with someone, but he just can't make himself feel it.
Allen is about to encounter an old friend. Although it will take him a long time to realize it, the young woman he calls "Madison" (Daryl Hannah) is an authentic creature of myth — a mermaid.
Suddenly, there is a splendid new comic presence among us. With Splash, Oklahoma-bom Howard proves that the success of his previous directorial efforts  — Grand Theft Auto (1977) and Night Shift (1982)— was no fluke.
Howard has the touch. He applies it here to breathe life back into the screwball comedy. Like the filmmakers of the 1930s, he weaves a fantasy that manages both to involve adults and enchant children.
Consider his villain. Dr. Walter Kornbluth (Eugene Levy) is a rude, bullying, hilariously self-destructive scientist who is dedicated to exposing the human-looking Madison's submarine secret.
"I'm really a nice guy," he assures us. "If I had any friends, you could ask them."
Darned if he doesn't eventually turn out to be a nice guy, a touch that affirms Howard's sweet-tempered approach to his material. Original, fast and funny without a hint of malice,  Splash is a sheer delight.

Afterword: Mermaids have been good to the Disney media empire. Splash was produced by Touchstone Pictures, the distribution company created by Disney in 1983 to market its more mature feature films. In 1988, Disney Television released a sequel, Splash Too, in which the couple return to New York: Allen (Todd Waring) to save the failing family business, Madison (Amy Yasbeck) to save a captive dolphin named Salty. Since then, Disney has managed to found a franchise on its animated musical adaptation of Hans Christian Andersen's The Little Mermaid (1989).
Historically, the movies' first submarine maiden was Annette Kellerman (who, coincidentally, is also credited with performing cinema's first nude scene, in the 1916 feature A Daughter of the Gods). The Australian-born swimmer designed her own fishtail costume to play the title role in The Mermaid (aka Siren of the Sea; 1911), the first of her five mermaid features. In 1952, Kellerman was the subject of the biographical musical Million Dollar Mermaid, in which she was played by swimmer-turned-actress Esther Williams. The year 1948 offered competing mermaid fantasies. In the U.S., Ann Blyth co-starred with William Powell in director Irving Pichel's Mr. Peabody and the Mermaid. In the U.K., Glynis Johns had the title role in Ken Annakin's Miranda, which was followed by her playing a dual role in its sequel, Mad About Men (1954).
Among the screen's more memorable mermaids in the years since are Linda Lawson — who may be a murderess — in Curtis Harrington's creepy 1961 thriller Night Tide; Jenny Seagrove, as a Scottish lass with a thing for the sea, in Bill Forsyth's magical comedy Local Hero (1983); and Susan Lynch, playing an Irish selkie, in John Sayles's mythic family drama The Secret of Roan Inish (1994). Yes, cartoon features have been full of fish-tailed females in recent years, but I did use the qualifier "memorable." Most of the the more recent pictures just aren't.

See also: For more John Candy performances, click through to my reviews of Planes, Trains and Automobiles (1987), and Volunteers (1985).