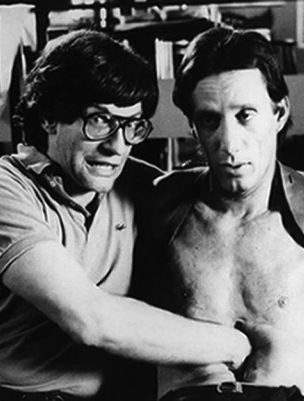 Writer-director David Cronenberg demonstrates the special effects prosthetic that makes it seem as if actor James Woods is able to insert a video cassette tape into his own gut in 1983's Videodrome.

Message is the medium


At a time when he was best known as a horror director, David Cronenberg successfully incorporated the ideas of media analyst Marshall McLuhan into a movie. Born on this day (March 15) in 1943, he managed the feat in his eighth theatrical feature, the surreal 1983 shocker Videodrome.

Thursday, February 8, 1983.
VIDEODROME. Music by Howard Shore. Written and directed by David Cronenberg. Running time:  87 minutes. Restricted entertainment with the B.C. Classifier's warning:  frequent gory violence, occasional nudity and sex.     AND NOW, IT'S DC + TV. Carved into a tree, you'd mistake it for a declaration of affection. You won't find it there, though, because David Cronenberg is a gentle soul who is not about to harm an innocent living thing.
Besides, it's not a declaration. lt's the first part of an explosive new screen equation. DC + TV = Videodrome, the film in which the remarkably inventive writer-director sets off in a new direction.
Cronenberg, 38, has built a career on his special ability to make nightmares come alive. His visions, detailed in such films as 1975's Shivers, Rabid (1977), Scanners (1981) and The Brood (1979), are universally disquieting, and uniquely his own.
Until now, his plots have maintained a thematic consistency. Each one has involved a medical man whose work goes awry with monstrous results.
With Videodrome, he moves into Philip K. Dick territory, adding technologically-induced paranoia to his usual flesh-in-rebellion fears. The misguided doctors have been replaced by some genuinely malevolent technicians.
Max Renn (James Woods) is the president of Toronto's CIVIC-TV, a seedy little outfit seen on channel 83, cable 12. His troubles begin when Harlan (Peter Dvorsky), Renn's resident video pirate, picks a program called Videodrome out of the electronic ether.
On his monitor, Max sees a woman and two men in a bare-walled room. "It's just torture and murder," he says later. "No plot and no characters. It's very realistic."
CIVIC-TV exists to sell sleazoid fantasies to the night-dwelling inhabitants of the urban shadow world. Part of Max's job is to justify CIVIC's programming policies by appearing on other, larger stations via their talk shows.
During one such encounter he meets Nicki Brand (Deborah Harry), a radio hot-liner who offers instant analysis of people's problems on her own "Emotional Rescue Show." Later, in the privacy of Renn's apartment, Nicki announces that pornography turns her on. Max offers her a look at Videodrome.
Nicki turns out to be the sort of girl who demands pain with her pleasure. "I wonder how you get to be a contestant on that show," she murmurs. Max decides that he needs to know more about the production.
lt's "not for public consumption," he is warned by the show's representative, Masha (Lynne Gorman). "It's for real. It's not acting."
Max is confused. "Why do it for real? It's easier and safer to fake it."
"It has something you don't have, Max. It has a philosophy, and that's what makes it dangerous."
In the mid-1960s, a University of Toronto professor named Marshall McLuhan gained international prominence as a media guru. Eventually, his disciples attempted to turn a profit on their prophet by turning his analysis into an ideology. When they failed, his name lost a lot of its lustre.
Filmmaker Cronenberg may just be the exception. In Videodrome, he creates a McLuhanian nightmare the like of which we've not seen before.
In searching for the secret of Videodrome, Max Renn joins the line of derelicts filing into the Cathode Ray Mission. Established by media guru Brian O'Blivion (Jack Creley), and run by his daughter Bianca (Sonja Smits), it exists to "patch them back into the world's video board."
Few other directors patch into the rhythm of the mind's own nightmare patterns as well as Cronenberg. From the very beginning, his pictures have had a deliberate scruffiness, the director's acknowledgement that high-gloss projects, such as Michael Crichton's Looker (1981), distance rather than involve audiences.
Here, the expected bodily eruptions are the result of a special signal built into the Videodrome transmission that "induces a brain tumour in the victim." O'Blivion assures Max that the growth is "a new organ, a new part of the brain" that produces hallucinations.
"Your reality is already half video hallucination," he declares.
Max is losing his grip. On one hand, he sees his television set turn into a living organism. On the other, he sees himself turning into an organic machine, a living cassette deck whose very guts open up to receive program tapes.
Cronenberg's grip remains firm. Not only will his Videodrome please the exploding head fanciers, but it is complex enough to keep serious fantasy buffs arguing for months.

Afterword: Celebrating his 72nd birthday today, David Cronenberg made his first short films while a student at the University of Toronto in the mid-1960s. Though we never met, I knew of his work then, and have continued to follow the career of my fellow alum with considerable interest. In those days, Marshall McLuhan was the U. of T.'s professorial superstar, so it came as no surprise that Cronenberg would include a McLuhan-like character in his 1983 meditation on media. The surprise is how long it took academic critics to catch on to his importance to the picture. McLuhan, who died in 1980, had fallen from fashion at the time, and film reviewers were still calling Cronenberg "the Baron of Blood." Today, we have a better appreciation for the profound changes that both men saw and reflected in their work. In a fascinating coincidence, it was on this day (March 15), two years after Videodrome's release, that the first Internet domain name — symbolics.com — was registered, marking the beginning of a seismic shift in the social dynamic that's rocking us to this day. Or, as a robotic voice says on the film's innovative soundtrack album (in a cut called Welcome to the Videodrome):