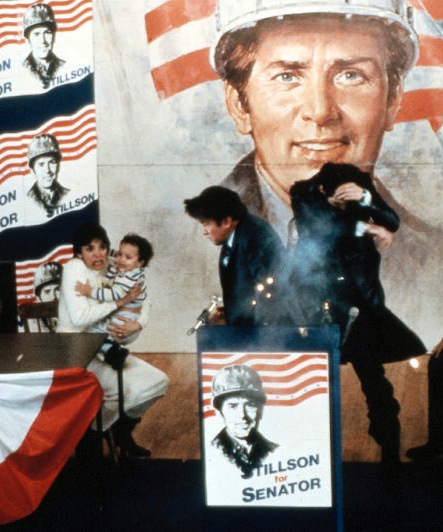 
Filmed on location in and around Niagara-on-the-Lake, Ontario, Canadian director David Cronenberg's The Dead Zone remains one of the all-time best adaptations of Stephen King.

Monday, October 31, 1983
THE DEAD ZONE. Written by Jeffrey Boam, based on the 1979 novel by Steven King, Music by Michael Kamen. Directed by David Cronenberg. Running time: 102 minutes. Restricted entertainment with the warning: "some gory scenes."

"There is no terror in a bang, only in the anticipation of it."
— Alfred Hitchcock.

DIRECTOR DAVID CRONENBERG has learned his lessons well. In adapting novelist Stephen King's The Dead Zone to the screen, he manages to keep audiences on the edge of their seats in terrified anticipation of the explicit horrors for which he is famous.
The story's set-up is classic Cronenberg. Johnny Smith (Christopher Walken), an elementary school teacher, is badly injured in a late-night automobile accident on a lonely rural road.
He awakens in a private clinic, apparently without a scratch. The first face he sees belongs to the clinic's director, Dr, Sam Weizak (Herbert Lom).
A private clinic? Sinister old Herbert Lom? Anybody who's ever seen a Cronenberg picture — Shivers, Rabid, The Brood, Scanners — is already frightened.
Surprise. The director is deliberately leading us on, playing with our expectations and casting against type to maintain an edgy tension throughout.
Smith's problem is not with medical malpractice, but with second sight. He soon learns that he has been in a coma for five years — his cuts and bruises healed naturally — and that he is in possession of unsettling clairvoyant powers.
Cronenberg, working from screenwriter Jeffrey Boam's lean, clean adaptation of King's rather overstuffed story, offers filmgoers a singularly satisfying suspense tale. After his return to consciousness, Smith faces two major disappointments.
One is the marriage, during his absence, of his girlfriend Sarah Bracknell (Brooke Adams). The other is that actually using his future-scanning ability is physically debilitating. "As the visions become more powerful," says Dr. Weizak, "the body weakens."
After helping small town sheriff George Bannerman (Tom Skerritt) solve a series of vicious rape-murders, Smith tries to drop out of sight. Then, unexpectedly, he has a horrifying premonition about a presidential hopeful, Senator Gregory Stillson (Martin Sheen), and feels the need to change the future.
The gripping story of a man who uses his unasked-for gift to make a dramatic difference, The Dead Zone is one of the two best King adaptations to reach the screen. Along with Carrie director Brian De Palma, Cronenberg knows how to extract the inner terror from King's modern nightmares.

AFTERWORD: The film's tormented hero, Johnny Smith, would enjoy a six-season afterlife on cable television. The show, also called The Dead Zone (or, in the U.S., Stephen's King's Dead Zone) starred Anthony Michael Hall and, like Cronenberg's feature, was filmed in Canada. This time the Greater Vancouver area stood in for the various Maine settings. A reboot rather than a sequel, it co-starred Toronto-born actress Nicole de Boer as Sarah Bracknell Bannerman and featured Sean Patrick Flanery in the recurring role of dodgy politician Greg Stillson.