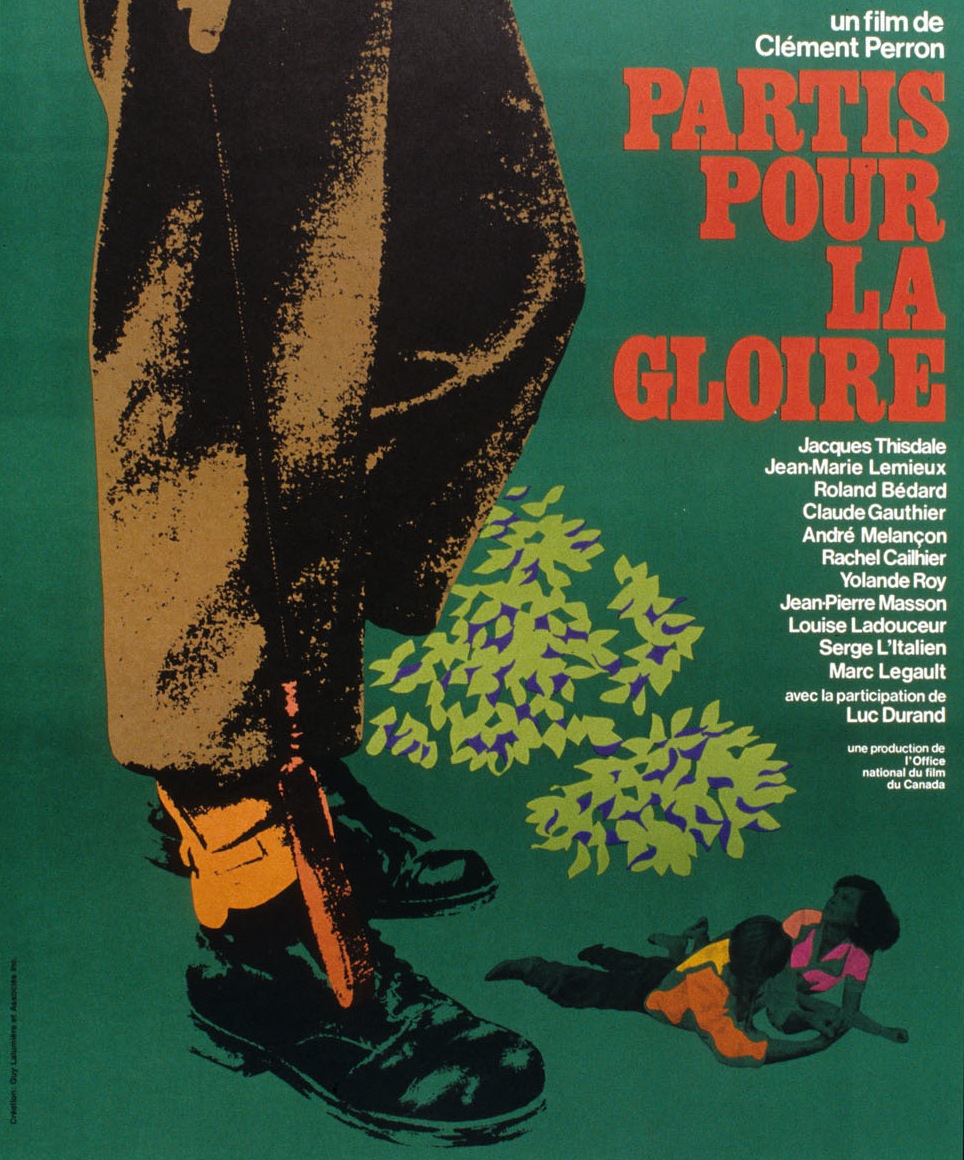 
What comes to mind on this day of Remembrance has much to do with your own community's experience of war. Partis pour la Gloire's picture of 1942 Quebec offers Canadians a much needed history lesson.

Tuesday, February  21, 1978
PARTIS POUR LA GLOIRE. Music by Francois Dompierre. Written and directed by Clement Perron. Running time: 102 minutes. Available in French only. IT'S A SHAME AND a disgrace. As a group, Canadians understand American history far better than their own. Generations spent importing another country's mass culture has left us with little cultural  sensibility of our own.
Take, for example, military conscription. Although we tend to think of draft resistance as a U.S. phenomenon, there is an older generation that can recall a time when this country was nearly torn apart by a conscription crisis. In a year [1978] when U .S. filmmakers are preparing to flood the market with bitter-tasting Vietnam war movies, why doesn't someone make a movie about this particularly dramatic moment in the Canadian experience?
Guess what? Someone has, and a damned good one, too.
It's called Partis pour la Gloire (Bound for Glory), and it was produced three years ago [1975] by the National Film Board.
The project was developed by Clement Perron, 48,  the man who wrote the screenplay for Claude Jutra's award-winning Mon Oncle Antoine. For Jutra, he drew upon his childhood memories. For his own picture, he recalls his wartime adolescence.
The time is August, 1942. Despite heavy opposition from Canadian-born citizens all over the country — historically it was the foreign-born who favoured rushing "home" to fight a European war —  Parliament has just enacted a draft law.
The Act divides families. the nation and the church. In rural Beauce, a young vicar (Claude Gauthier) is horrified to hear an older priest (Rolland Bedard) counselling obedience to the authorities. "Aren't you confusing Christ with the King of England?"
In a superb evocation of the 1940s, Perron tells us the story of five youths. At the centre of his tale is an intense, hard-working farmer named Pierre Dodier (Jacques Thisdale). "Since my father died," he says, "no one has helped me . . . especially not the government."
The Dodiers have farmed the same land for 150 years, and Pierre is afraid that if he leaves it, he'll lose it. His older sister Nicole (Rachel Cailhier) is involved with the local mayor's son, Claude Moreau (Serge L'Italien), a bookish lad who is eligible for a student deferment.
Pierre's younger sister Lise (Louise Ladouceur) is a teenaged coquette. Despite herself, she's attracted to the stiff-necked Jean-Claude Laroche (Andre Melancon), the Canadian Army lieutenant who arrives in town with a brass band and a squad of military police to enforce "the Law."
The Law. The underlying theme of Perron's riveting period drama was not lost on Quebec filmgoers. "C'est de 'measures de guerre,'" ("It's about a "war measures act,'") Montreal critic Jean-Pierre Tadros wrote in Le Jour. And so it is.

Afterword: For the most part, I've nothing but good things to say about The National Film Board of Canada. For example, when I learned that the NFB's Vancouver office was bringing in Partis pour la Gloire for a single screening (in February, 1978), I asked if I could preview the picture. No problem, they said. Well, maybe one little problem. The federal government, in its wisdom, had decided there wasn't enough interest outside of Quebec in a picture about the Second World War conscription crisis