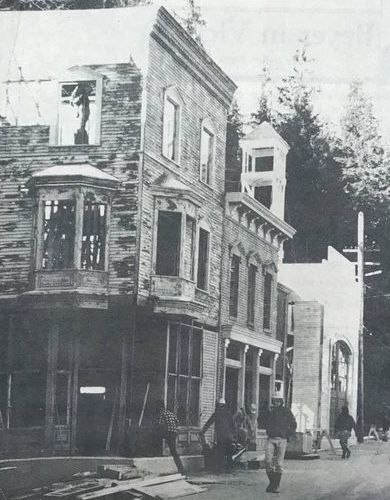 A news photo from 1989 recorded the construction of a 1930s town near B.C.’s Stave Falls Dam for use as the set for director Neil Jordan’s version of We’re No Angels.


Faithless remake fails to be funny


Much honoured for his raw, gritty stage plays, David Mamet was born on this day (November 30) in 1947. Comedy, on the other hand, was never his forte, a fact Mamet demonstrated in his 1989 screenplay for director Neil Jordan’s mirthless made-in-B.C. remake of We’re No Angels.

WE’RE NO ANGELS. Written by David Mamet, based on Ranald MacDougall’s screenplay for the 1955 feature We’re No Angels. Music by George Fenton. Directed by Neil Jordan. Running time: 106 minutes. I KNOW. IT WAS supposed to be a holiday.
Time off. Time to catch up on my reading, and maybe get out of town for awhile. Can you imagine a week?
By the second week, though, I was beginning to suffer from withdrawal symptoms. It was time to play catch-up on some of the movies I’d missed during the long labour dispute at the two theatre chains.
I managed nine “new” (to me) features, two of them pictures filmed right here in B.C. It’s a bit late for reviews, though. No matter. We’ll call these notes video previews . . .

YOU DON’T HAVE TO be Catholic to be offended by We’re No Angels.  A grubby,  sleazoid comedy, it was supposedly “inspired” by Michael Curtiz’s charming 1955 feature. Its director, Neil (Mona Lisa) Jordan, cast Robert De Niro and Sean Penn as a pair of dopey convicts on the lam from the law.
Disguised as priests, they hide out in a Depression-era border town in the midst of a religious celebration. Filmed near Mission, B.C., the picture is as inept as it is unfunny.

Afterword: For many years, I made it a practice to book two weeks of my annual vacation time in January. It was a good time to recharge the batteries after the always hectic rush of Christmas openings. In 1990, though, it turned into a classic busman's holiday. In October, 1989, an embattled projectionists' union had been locked out by both the Famous Players and Cineplex Odeon theatre chains. As union members did not cross other unions' legitimate picket lines, the dailies had to either forgo covering some film openings, or seek them out in suburban theatres not in dispute with their employees.
A settlement of sorts was reached in mid-December, and in January — on my own time — I found that I just had to play catch-up. The result was a column (excerpted above), in which I offered capsule reviews of nine features, including the first of the made-in-Vancouver Look Who's Talking pictures.
Then there was We’re No Angels, the remake of a beloved Hollywood Christmas comedy that proved that the otherwise talented Irish director Neil Jordan didn’t have a winsome bone in his body. The original starred Humphrey Bogart, Peter Ustinov and Aldo Ray, actors who delighted in playing off-type. The remake featured the otherwise capable Robert De Niro and Sean Penn (as well as a company of fine supporting players) looking lost and embarrassed. Jordan’s screenwriter was David Mamet, who turns 71 today (November 30). A playwright who excels at modern urban angst, he eliminated the holiday season with its sentimental mood, and added an unnecessary threat of violence to the package. Perhaps worth mentioning is the fact that the picture falls within that peculiar American movie subgenre that sees Canada-as-promised-land for worthy fugitives. Regardless, it bombed at the boxoffice.