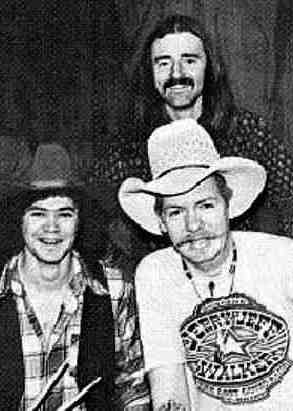 
On this day (April 28) in 1978, three University of B.C. alumni, who would go on to successful individual careers in Canada’s film and television industry, were honoured at a concert organized to premiere (and help recoup the costs of) their music documentary, Country Music Nitely.

COUNTRY MUSIC NITELY. A documentary short exploring the musical world of the Cement City Cowboys. Directed by Sturla Gunnarsson. Running time: 20 minutes. World premiere Friday [April 28, 1978] at The Dock. THE JOINT IS JUMPING. Up front is one of the meanest, scruffiest-looking bands you're likely to see this side of a cell block. They look rough but, man, are they making music!
Brenton Spencer remembers the date. It was April 17, 1977. A week earlier he had dropped into his favourite beer parlour to cash a cheque.
That was when he found out that the Cement City Cowboys were booked into the American Hotel, the self-styled "home of country music in Vancouver."
The Cowboys were the hottest group in town. "The whole place was charged with such an incredible energy," Spencer recalls. "I knew that we had to make a movie about it."
Spencer, 24, was a film student at the University of B.C. With fellow students Sturla Gunnarsson, 26, and Judy Koonar, 28, he had decided that he wanted to make a living making movies.
So far, they have managed three major steps towards that goal. Last year, A Day Like the Others, an experimental short directed by Gunnarsson and photographed by Spencer, took the top prize at Montreal's annnal Canadian Student Film Festival.
Last year, too, the National Film Board commissioned them to produce two short instructional films for the Secretary of State's office. Friday [1978] is the premiere of their first independent production.
Country Music Nitely is a visual impression of the Cement City Cowboys. They were a group, Spencer says, "who had all the talent in the world but just didn't make it." They disbanded in August, 1977.
The Cowboys — the core group consisted of leader and vocalist Danny Mack, Leroy Stevens, Peter Hamelin, Jimmy Clyde Wilson and Gary Comeau — specialized in something Spencer calls "outlaw country." They were steeped, not in the smooth, commercial Nashville sound, but in the kind of "redneck rock" played in Austin, Texas.
Whatever it's called, it's alive. From some 300 minutes of film, the young moviemakers have distilled some honest, powerful spirits and packaged them in a terrific little film.
Their picture opens with the Cowboys collecting a Danny, the B.C. Country Music Award, as the year's most promising new band. For the most part, though, the setting is the beer parlour of Main Street's American Hotel.
"It's sort of a dump," says a voice on the soundtrack, "but it's got atmosphere in a sleazy sort of way."
The Cowboys are part of the atmosphere. At work, they have the sweaty, unshaven look of hired hands jamming in a bunkhouse, brash and beery.
Though the film runs 20 minutes, it seems to go much faster. That's a tribute to the picture's pacing — Spencer, Gunnarsson and Koonar share the editing credit — as well as its music.
Although it offers audiences a gritty, unglamourous look into their lives, the musicians seem to like Country Music Nitely. They've even agreed to play a benefit, an event designed to introduce the three filmmakers' production coop (called The Rainforest Film Society) and help recoup the costs still outstanding on the movie.
Friday evening [1978], at least three name bands — Danny Mack and the New Cement City Cowboys, Blue Northern and Dirt Road Backstreet — plan to take the top off The Dock, located on the former CNR landing at the foot of Main Street.
The music starts at 8 p.m. The movie premieres at midnight. The highlight of the evening, Spencer says, will be a one-time-only reunion of the original Cement City Cowboys. They will regroup for a farewell set following the film.

Afterword: The three UBC alumni did go on to make a living making movies. Brenton Spencer first worked as a cinematographer, shooting made-in-Vancouver feature films and television series. He made his directorial debut in 1990, during the fifth season of TV’s 21 Jump Street, then added features to his resume with the 1993 teen thriller Blown Away. Vancouver-based, Spencer has been active in the B.C. production industry for nearly 40 years.
Sturla Gunnarsson, who describes himself as “Canada’s resident Viking filmmaker” — he was born in Iceland — married his Country Music Nitely colleague Judy Koonar, and they have made Toronto their home. His first documentary feature, 1981’s After the Axe, earned him an Academy Award nomination. His first fictional feature, 1991’s Diplomatic Immunity, received four Genie Award nominations. A past president of the Director’s Guild of Canada, he continues amassing credits and honours for his docs, features and TV episodes.