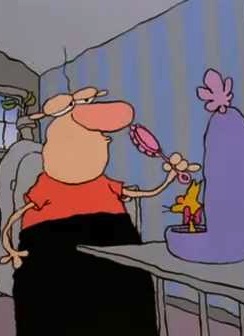 
Our Canadian tax dollars at play

Thursday, December 27, 1991.
THE NATIONAL FILM BOARD OF CANADA'S ANIMATION FESTIVAL. Produced by Terry Thoren. Running time: 87 minutes. Rated Mature with no B.C. Classifier's warnings. FRANKLY, I'D EXPECTED A bit more nostalgia.
Long one of this country's unalloyed treasures, the National Film Board's animation department turned 50 this year. It marked the occasion with the Boxing Day release of its own feature-length Animation Festival.
An anniversary package containing 11 new works and five "classic moments" from previous releases, this is one celebration that avoids dwelling on past triumphs.
The oldest of the "classic" excerpts (each a brief two minutes) reaches no further back than 1985 (to Richard Condie's Oscar-nominated The Big Snit).
The new pictures are all 1991 productions.
Together, they offer a snapshot of the current creative mix in the only federal film studio where eccentricity counts for more than ideology.
Techniques remain as individual as the artists.
Caroline Leaf, for example, painstakingly etched her 10-minute island fantasy Two Sisters directly on 70-mm film stock.
Strings, Wendy Tilby's off-centre 10-minute urban drama, was painted on panes of glass.
The Lump, John Weldon's 7½-minute political parable pieced together from found materials, bills itself as an act of "recyclamation."
Brian Duchscherer manages to be heartily comic in his 8½-minute stop-motion "puppetoon" about Saskatchewan's original aviator, The Balgonie Birdman.
Cel animators achieve a more conventional cartoon look in a selection that includes Richard Condie's surreal The Apprentice, Les Drew's sly Every Dog's Guide to the Playground and Christopher Hinton's energetic musical tribute to the Ontario Blackfly.
All manage to strike very different moods, demonstrating the imaginative range available to the medium.
The National Film Board of Canada's Animation Festival celebrates an an institution that manages to avoid being overly institutional.

Afterword: American cartoon aggregator Terry Thoren, with such feature collections as 1989's The Second Animation Celebration to his credit, recognized the NFB library for the treasure that it is. From the very beginning, Canada's federal filmmaker had an Animation Unit. Founded in 1941, when Film Commissioner John Grierson recruited the Scots-born Norman McLaren, the cartoon studio quickly became the jewel in the agency's crown. To date, Board films have been nominated for Hollywood's Academy Award 72 times, with 33 of those pictures being in the animated short film category. Of the NFB's 11 Oscar wins, six were for its cartoons.